Kristiane Backer on Ramadan
Fasting from Anger, Impatience and Negativity

As a host on the music channel MTV Europe, Kristiane Backer became an icon of 1990s pop music culture. In 1995 she converted to Islam. In this article, Backer shares some personal Ramadan experiences and reflects on the meaning of this Islamic month of fasting 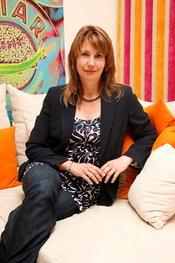 TV presenter and journalist Kristiane Backer derives strength and joy from the Ramadan fast, which she describes as "a wonderful experience"

​​ My first Ramadan, when I was 30 years old and a relatively new Muslim, was a bit of a disaster. Since becoming a Muslim, I'd had an eventful year. I had been an award-winning television presenter on MTV Europe and host of the youth show Bravo TV in Germany. But my conversion had sparked a negative press campaign in the German media which led to me losing my presenting work almost overnight.

The many inner changes I underwent on my way to becoming a Muslim had led to my outer world cracking up and falling apart. In retrospect, having been stripped of everything I had identified with – my relationship, which ironically had been my introduction to Islam, had also ended – was a blessing in disguise. It allowed me to concentrate on what really mattered: my connection with God, learning about faith, and beginning to reorient my life and, most importantly, myself.

The evening before my first Ramadan, I made the mistake of going out with friends and drinking a glass or two of champagne. The next day I lay in bed dehydrated and with a pounding headache. Finally, at three o'clock in the afternoon, I gave up, saying to myself, Ramadan is not for me. May God forgive me.

A test of faith, strength and character

The following year I landed a new job, hosting a daily cultural programme on NBC Europe. Ramadan coincided with the Christmas holidays. In order to have a Christmas break, we needed to produce twice the amount of programs a day, which meant recording links and voice-overs from morning to night. I thought I would never manage because I always drink water in between takes. 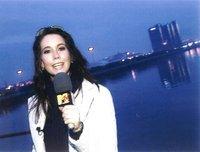 ​​ But God made my mouth water by itself and I flew through the fasts. Of course it helped that by then I had given up alcohol. Many colleagues complimented me on how radiant and pure I looked. It was actually a wonderful experience. Since then I have fasted every single Ramadan for the last 13 years. In fact I look forward to it although I am always slightly worried about the long days coming up. But thankfully, God has endowed me with strength every time.

Last Ramadan I was on a filming assignment in Germany for the Travel Channel when I received numerous messages via e-mail, text, Twitter and Facebook from around the world wishing me a blessed Ramadan. I thought "I can't possibly be a wimp and use the excuse of travelling to avoid fasting". I asked the local hotel to prepare my breakfast at night so that I could have suhur, i.e. a pre-dawn breakfast before the daylight fast, just after 3 a.m. and drink as much water as I could.

I went back to bed and was ready at 9 a.m. to film all day. I only began to suffer from a headache in the afternoon, but luckily we were finished by then and I could rest in a comfortable seat at Frankfurt airport before boarding the plane. I opened my fast with a packed lunch just before landing and was lucky enough to be welcomed home by my girlfriends with a dinner.

I find the first day of Ramadan to be the most difficult. From then on, my body gets used to the new regime and I don't even really feel hungry; I just get tired earlier and slightly exhausted towards the end of the month. I enjoy the feeling of light headedness and slight weakness and feel fasting helps me tremendously to reign in my ego and feel close to God, to others who fast, and to the needy.

According to one hadith, "the gates of hell are closed and the doors of Paradise open" for those who fast during Ramadan. I have felt this to be true and have sometimes experienced what I call Ramadan miracles. 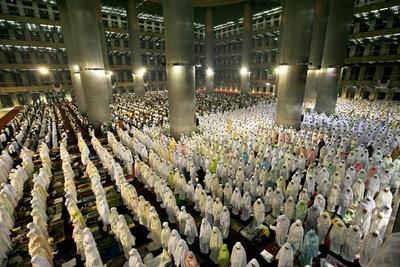 According to one hadith, "the gates of hell are closed and the doors of Paradise open" for those who fast during Ramadan

​​ I once suffered a slipped disk just before Ramadan. It was painful, but the worst thing of all was being told by my doctor that I could forget my plans to go on the Hajj, the pilgrimage to Mecca.

Thanks to intense physiotherapy and prayers, my disk healed without surgery during the month of Ramadan. A surgeon friend attested that this was indeed a healing miracle as mine had been a very bad case. So praise to God, I did go on the Hajj!

Of course work doesn't stop during Ramadan in London so it can be a bit tough when dealing with non-fasting people, but that is part of the challenge. I don't socialize or go to the movies unnecessarily. Instead I spend more time reading the Qur'an or religious books, praying and invoking God. And I try my best to fast from anger, impatience, gossip or any other negativity.

The community spirit of Ramadan

This year I may participate in the "Fast and Feed" project where Muslims invite homeless people to the mosque to share food and talk about the meaning of Ramadan. I may also attend an iftar, the Ramadan evening meal, with MPs and policy makers.

But what I really enjoy is breaking fast at my Arabic girlfriend's house; she often invites ladies round for iftar. This gives me a taste of love and warmth, the celebratory community spirit of Ramadan, and the sense of sharing, which we otherwise miss in the West, especially when one does not have a Muslim family, is single and works.

​​ One time I was in Egypt the day before Ramadan started. I was moved to tears when I saw thousands of people in the main square near Saydna Hussain looking for the moon and crying out: Ramadan Karim, beautiful moon, where are you. When they saw it, it was like a party, a joyous community event.

Even in London I feel Ramadan is a very special and blessed time. I believe this annual spiritual discipline is a key to transforming and bettering myself as a human being – of course there is still a long way to go. I take stock of my life, think about what I want to improve, actively work on forgiving people who may have hurt me and dissolving any resentment in my heart, and pray to God for forgiveness.

Through fasting in Ramadan I feel closer to God, clearer, more aware and more sensitive. Even my sense of taste is heightened. It is as if I am in a different, higher state. I always want this sensation to last as long as possible, but somehow everyday life sets in again once Ramadan is over.

I enjoy the communal Eid prayer tremendously; it is so beautiful and melodic and one feels truly united with fellow Muslims in faith and in God. I also feel an unparalleled joy that I am strong and in control of my body and my impulses – and not the other way around. May this strength we gain from fasting last for the rest of the year.

Beginning of the Month of Ramadan
The Saudis and the Elusive Crescent
How exactly does one determine the beginning of Ramadan? Different schools of thought provide different answers, and Saudi Arabia uses a different system than much of the rest of the Islamic world. Chris Luenen provides an overview

END_OF_DOCUMENT_TOKEN_TO_BE_REPLACED
Social media
and networks
Subscribe to our
newsletter