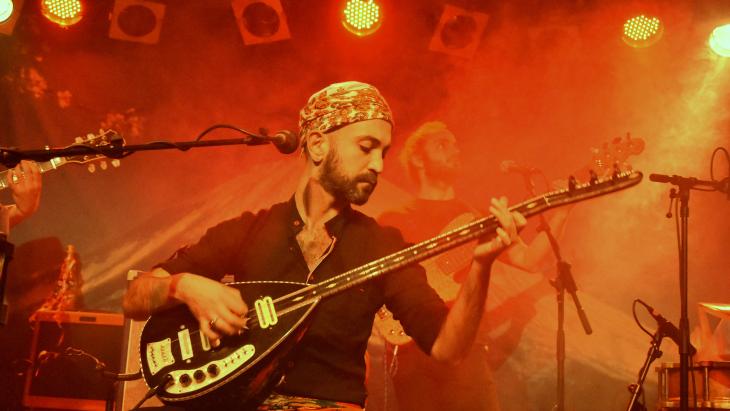 The music of Adir Jan, a Kurdish singer-songwriter and saz player born in the Kreuzberg district of Berlin successfully brings together the diverse worlds of queer poetry, Kurdish folk, Sufi mysticism and psychedelic art rock in a music whose hypnotic rhythms bring together many different communities. By David Siebert

Songs such as "Keskesor" (Rainbow) may be in the Kurdish Kurmanji dialect, but there is no mistaking the anger in the voice proclaiming, "the right of men to love men", because "love is all that matters." The swirling rhythms of his electrically amplified saz, an oriental long-necked lute, or tembur in Kurdish, coalesce with rock bass, electric guitar and percussion in an intricate, mesmeric 9/8 rhythm. The song references the "honour killing" of 17-year-old Rosin Cicek, who was killed by his father and two uncles in the Kurdish city of Diyarbakır in south-eastern Turkey in 2012 because he was gay.

"It affected me very much when I read about that. I wrote the song out of the pain I was feeling", Adir Jan explains. "But I also say in the song that homophobia of this kind did not exist in the Middle East and the Maghreb in earlier times. Same sex love was something that had long been accepted in those societies." He says it was the "white man" that was to blame for the change: "It was colonialism and imperialism that brought homophobia to these regions. The definitions of man and woman and who should sleep with whom, came from the West."

Adir Jan sits sipping mint tea, in Cafe Sudblock, a queer alternative bar and arts centre near the Kottbusser Tor in Berlin-Kreuzberg, surrounded by tourist hostels, Turkish greengrocers and Arab shisha bars. It was into this multicultural cosmos that he was born in the 1980s as the son of a Kurdish immigrant. As a teenager, he performed in a folk-dance group in the Kurdish cultural association around the corner and began to immerse himself more deeply in the languages and musical cultures of his parents' homeland.

Later, he became an activist in various Kurdish associations, including GLADT an organisation for Turkish gays and lesbians. He also spent a lot of time working back then, as well as studying to become a teacher. Inevitably it all became too much and ended in burnout. It was really a "stroke of luck", he says and it brought him to his senses, forcing him to concentrate on what was really important to him – his music.

Adir Jan began looking around for musicians to collaborate with and had the good fortune to find the guitarist Conny Kreutzer and the percussionist Hogir Goregen, both of whom are still providing the rock sounds, wah-wah effects and swirling Kurdish drumbeats that infuse the music with their hypnotic appeal. His time at Sudblock saw the inception of the queer Orient concert series "Zembil" (wicker basket) which quickly gained cult status.

The event's popularity meant that the audience soon outgrew the venue and a move to the legendary Berlin Club SO36. Apart from the songwriter himself, the programme here includes guest musicians with Oriental roots, a lascivious androgynous belly dancer and DJs. The audience is made up of hipsters from all over the world, Turkish, Kurdish and white Berliners of various sexual orientations and gay refugees. The evenings finish late, often with everyone hand in hand, dancing a Kurdish folk dance together.

Adir Jan calls his music "Cosmopolitan Kurdesque". "Kurdish music", he says, "is my greatest influence, though I try to free myself from roots of any kind." He used to listen a lot to Turkish, Indian and Arab pop, art and folk music as well as to psychedelic rock and flamenco. "The music of the people I work with influences me too, all of that comes out in my songs."

His songs are also very much influenced by his personal experiences. They are about past lovers, the longing for universal love to sweep away heterosexual categorisations and about the death of his father. But there is politics too. "Sengal", for example, deals with the genocide perpetrated by IS against the Yazidis and criticises the passivity of the global community.

The last song on his debut CD "Leyla" is a cover version of a song by the Turkish Sufi mystic Yunus Emre. "I am not Sufi", Adir Jan explains, but the Sufi doctrine of oneness with the world can be found in his songs. "When I talk about love, I mean love of every kind: love for a flower, for a tree, for you, for everyone!"

Most of Adir Jan's songs are written in Kurdish, with a sprinkling of Turkish, Arabic and Greek. German, he tends to avoid, however, as it often sounds "too hard when sung". Concert audiences are given brief explanations of what each song is about and the booklet that accompanies "Leyla" has English translations.

They reveal a great deal of pathos and sharp poetic imagery: for example, when the Kurdish Newroz holiday is associated with allusions to the Old Testament's "forbidden fruit" of Adam and Eve – in a homosexual version, of course; or in the image of a flower garden and rainbow – symbol of the gay and lesbian movement.

All in all, it is a provocative mix: "Even if I didn’t describe myself as political, my songs would still be politicised", says Adir Jan. "Just choosing to sing in Kurdish is seen by many people as a political act – the Kurdish language and music were forbidden in Turkey for many years!"

In spite of this, in his many concert appearances, at Myfest or the Carnival of Cultures in Berlin, as well as countless folk festivals, he has only ever experienced one negative reaction: "It surprises me too."

He has chosen to release his CD, on which he has been working for some years, on a Turkish label as well, in the hope of having some success there too. A chance to perform there would be a dream come true for him. "Of course, I am also worried about the current Turkish leadership, but I keep getting messages from people asking, "When are you going to come here, when will you play for us?" One even wrote: 'You give us hope in hell!'"

Adir Jan's music mix is not new. There have been numerous flirtations between Oriental music and psychedelic rock. But these Kreuzberg Variations, with their dash of cosmopolitan Kurdesque laced with queer political poetry, are highly original, audacious and refreshing.

Germany’s electorate includes some 7.4 million citizens with international roots, while many more millions of residents from abroad aren’t allowed to vote. Both groups are often ... END_OF_DOCUMENT_TOKEN_TO_BE_REPLACED

Germany's foreign policy is explicitly values-based. But what happens, Ralf Bosen asks, when democracy, the rule of law and human rights collide with the logic of trade and ... END_OF_DOCUMENT_TOKEN_TO_BE_REPLACED

No other Western poet was arguably so well-versed in the Koran or so fascinated by Islam as Germany's national hero, Goethe. In a new publication that examines all Goethe's ... END_OF_DOCUMENT_TOKEN_TO_BE_REPLACED

Migrants are often maligned as being responsible for Europe's problems. Yet their integration is in Europe's interest. Michael Thaidigsmann believes that a long-term vision is ... END_OF_DOCUMENT_TOKEN_TO_BE_REPLACED

How could the Afghan government and its institutions collapse so quickly? That things were going wrong in Afghanistan had been obvious for a long time, yet the West preferred to ... END_OF_DOCUMENT_TOKEN_TO_BE_REPLACED

Shida Bazyar's new novel is the literary surprise of the year. It tackles the pressing issues of our time, and yet it is timeless. This is a story of friendship, marginalisation ... END_OF_DOCUMENT_TOKEN_TO_BE_REPLACED
Author:
David Siebert
Date:
Mail:
Send via mail

END_OF_DOCUMENT_TOKEN_TO_BE_REPLACED
Social media
and networks
Subscribe to our
newsletter