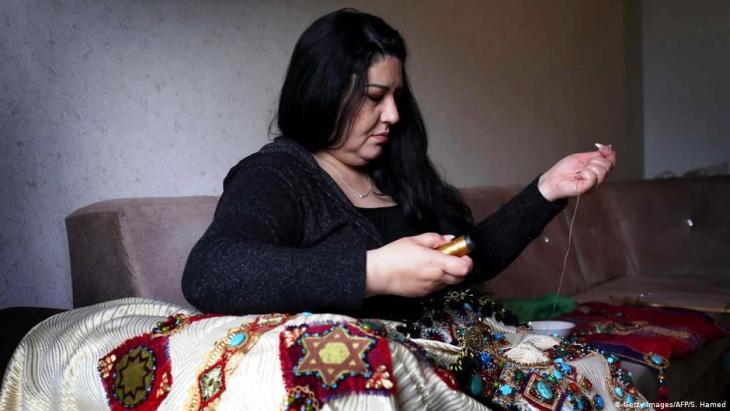 On the long white fabric of Shanaz Jamalʹs lovingly embroidered religious robe, the cross faces the crescent and the three-branched wing of the Zoroastrians to the nine-pointed star of the Bahais: with her embroidery, Jamal aims to reconcile the multi-ethnic north of Iraq recently ravaged by jihadists

Shanaz Jamal, 40, says she has already been assured by the authorities in the autonomous northern region of Kurdistan that they will send her work to the Vatican to be put on display. A Muslim, she explains how she embroidered "3,000 beads including semi-precious stones traditionally used for Kurdish crafts" onto the white ecclesiastical cloak.

After five months of endeavour, she stitched together eight symbols representing the main communities in Kurdistan and Iraq, which are both predominantly Muslim. But there is also the Jewish Star of David and the sun and temples of the Yazidis – the minority in northern Iraq persecuted by the Islamic State group (IS) for their faith in what the UN has described as possible genocide.

From the beginning, Jamal says, she planned to offer her artwork to Pope Francis as a "symbol of peace and harmony in the world".

"I want to show that women in Kurdistan want co-existence and fraternity between all religions," she told journalists. "I do not see any difference between them: they all share love," she added, repeatedly glancing at the ornate robe.

Experts and activists see reconciliation between the various communities as the number one priority in Iraq. Without it, they say, the country's reconstruction will be impossible and the 1.8 million people displaced by the conflict won't want to return.

Situated on the lands of ancient Mesopotamia, Iraq has been ruled by many civilisations and is today a patchwork of peoples and faiths. Their co-existence was shattered in 2014 when IS jihadists seized large swathes of Iraq and neighbouring Syria.

Now, more than a year after Iraq declared victory over IS, tensions persist, especially in the north of the country where minorities accuse each other of crimes.

It has seen Yazidis and Sunni Muslims at loggerheads, with the minority accusing the latter of complicity with IS and the Sunnis insisting they live in fear of retaliation for acts committed by other members of their community.    (AFP)

Home
Print
Newsletter
More on this topic
Interfaith dialogue in Palestine: Reviving a heritage of peaceful co-existenceThe culture and faith of the Yazidis: Demonised and eternally misunderstoodChristians in the Middle East: Between co-existence and suppression
Related Topics
All Topics
Date:
Mail:
Send via mail

END_OF_DOCUMENT_TOKEN_TO_BE_REPLACED
Social media
and networks
Subscribe to our
newsletter