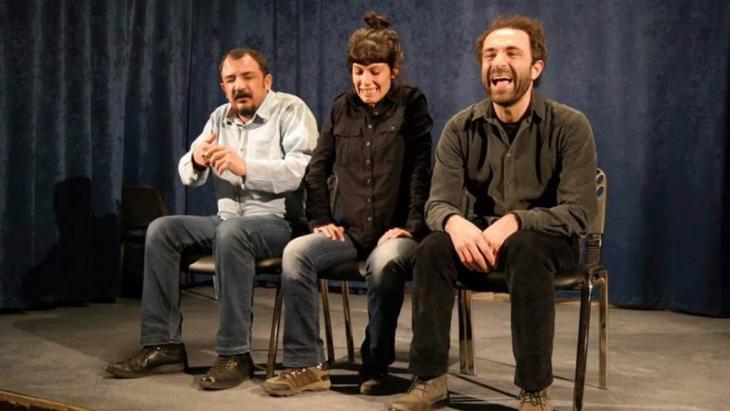 Kurdish artists in Diyarbakir
"No room to breathe anymore"

Ever since the Erdogan regime began its crackdown on Kurdish cities and opposition politicians, numerous cultural professionals in the east of the country have felt the noose of repression tightening around them too. By Sonja Galler in Diyarbakir

"This is a good place to live," I said to myself when I first came to Diyarbakir in 2008. A short time later, I decided to stay. With a population of approximately 1 million, this city on the River Tigris was different to many in eastern Turkey. For one thing, it wasn't just a dreary sea of high-rise residential blocks peppered with identical shopping centres; it had a lively, albeit dirt-poor old quarter. It also had an active civil society and a slowly blossoming cultural scene with theatre and music festivals, numerous publishing companies and book shops, local film-makers, amateur photographers, NGOs and Kurdish language courses. Exhibitions and conferences, although not always paragons of academic objectivity, focused with verve and hungry curiosity not only on the recent history of the city, but also on burning issues of contemporary relevance.

Many of these facilities and activities were supported and partially funded by the local Kurdish city council, which was the most important local co-operation partner for cultural activities of all kind and which succeeded in creating an atmosphere of openness.

″Hardly anyone here was aware that there were painters and sculptors in the city. With our exhibitions, we helped Diyarbakir discover its own artists,″ says Baris Seyitvan, who ran the municipal art gallery Amed for seven years, during which time he organised dozens of national and international exhibitions, panels and workshops.

Himself a visual artist, Seyithan is also an activist with a packed diary. At least he was until the start of this year, when he was made redundant: ″We were targeted because we were in close contact with the people and had success with our art in our own institutions.″ 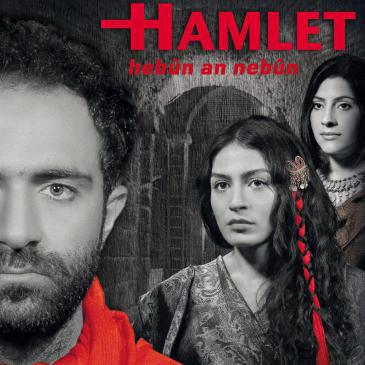 Courage born of despair: Yavuz Akkuzu, member of Diyarbakir′s municipal theatre company, darling of local theatre-goers and the actor who played Hamlet is determined to carry on: ″By simply throwing out an ensemble that has existed for decades, our rights have been taken from us. But perhaps that will pave the way for a more independent, stronger, more political identity"

As in the other 50 cities where local governments were disbanded and replaced by representatives from Ankara, one of the first things the representative did after arriving in Diyarbakir was to close locally funded centres for culture, language and women.

He also ordered the removal of any signs bearing the Kurdish name of the city – Amed – and the dismantling of a monument to the victims of Roboski.

In addition to the Aram Tigran Conservatory and the Kurdi-Der Language Institute, the Diyarbakir municipal theatre with its 30-strong ensemble is being closed down.

The theatre has existed for 27 years and has been staging plays and performances exclusively in Kurdish since 2009. Their performances of Hamlet and the Kurdish epic Mem und Zin – adapted for the Kurdish community with lots of music, dance and wit – played to full houses.

″We are rapidly returning to the days when all things Kurdish were criminalised,″ says Moran, a doctoral candidate studying the Kurdish-language literary scene in Turkey.

He goes on to say that after the targeting of leading politicians and political organisations, the focus has now shifted to the intellectuals in the Kurdish movement.

This is evidenced by the dismissal of numerous Kurdish academics who took part in the petition 'Academics for Peace' and the closure of the Kurdish Institute in Istanbul. More than a few people, says Moran, have begun hiding their Kurdish-language books again.

State of emergency now the norm

But the tough times for Diyarbakir did not merely begin with the failed coup in July 2016 and the state of emergency that followed. It was the military operations in the old quarter, Sur, which went on for 100 days in 2015 and 2016, not to mention the flight of tens of thousands of residents that shook the city to its core.

"The war in Sur, the old town, impacted on everyone; no one could escape it,″ says Ilham Yilmaz, a psychologist at the Human Rights Foundation of Turkey. He adds that one could quite literally see how the violence affected the city's structures and how room to manoeuvre was restricted, both physically and figuratively.

After all, with so much injustice around, no one could feel safe and secure. People also felt ashamed to be working on other things when people were dying just a few kilometres away.

The fact that there are hardly any public spaces left where people can express their rage or sorrow about this situation was also illustrated by the temporary suspension of 4,000 teachers, whose only 'crime' was apparently to have taken part in a strike organised by the trade union Egitim Sen. The aim of the strike was to draw attention to the untenable situation. 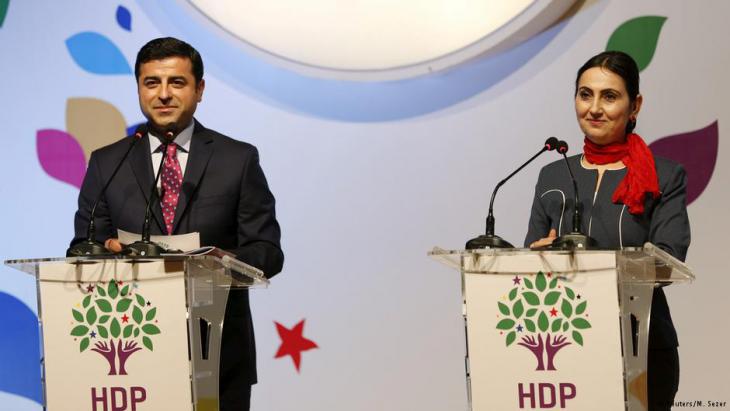 Draconian penalties for Kurdish opposition politicians: the state prosecution is demanding a maximum sentence of 142 years for HDP leader Selahattin Demirtas. It also foresees 83 years of detention for the co-chair of the pro-Kurdish HDP. Both politicians have been in custody since November, accused of nurturing links to the PKK rebels. A total of 11 HDP members of parliament are currently in prison and therefore unable to engage in parliamentary activities

Although many of the suspended teachers, including well-known writers such as Renas Jiyan and Murat Ozyasar, have been restored to their jobs, fear runs deep. Things have gone very quiet in Diyarbakir, in public, in social media and among colleagues.

″The fact that even Selahattin Demirtas and other politicians have been locked up frightens the people and makes them go silent. Eight Kurdish cities were destroyed; many people were arrested; 53 co-mayors were replaced by representatives; many journalists are behind bars. There is no room for Kurds to breathe any more,″ says journalist and filmmaker Salih Suleymani. Many people would heartily agree.

Despite all this ,Yavuz Akkuzu, a member of the Diyarbakir municipal theatre, darling of local theatre-goers and the actor who played Hamlet in the theatre's successful production of the Bard's classic, is determined to carry on: ″By simply throwing out an ensemble that has existed for decades, our rights have been taken from us. But perhaps that will pave the way for a more independent, stronger, more political identity.″

He goes on to say that two rooms have been rented for the ensemble: one is tiny and the other has no stage, but the plan is to use them for theatre performances, film screenings and tuition for up-and-coming actors. ″After being made redundant, we just kept on working. Two performances have been developed and are now ready for the stage.″ Both performances are comedies.

Is this a demonstration of hope in the face of a situation that is getting worse by the day? For some time now, not only political activists and trade unionists, but also academics and artists have been leaving the country. Just last December in Berlin, 67 intellectuals who had to leave Turkey after voicing criticism of the Erdogan regime, set up the Forum against War and Dictatorship and for Freedom. Will we soon have returned to the days when exile was a place for Turkey's freethinkers?

As Syrian camps housing families of Islamic State fighters get more dangerous, there are calls to bring children out, even if the mothers don't want to go. The idea of separating ... END_OF_DOCUMENT_TOKEN_TO_BE_REPLACED

The Kurds are under attack from two sides: from Turkey, and from Iran. The situation in their territories in northern Iraq is becoming increasingly desperate. Birgit Svensson ... END_OF_DOCUMENT_TOKEN_TO_BE_REPLACED

Hundreds of porters, locally known as ‘kolbars’, cross the mountainous border between Iran and Iraqi Kurdistan all year round. With Iran’s economic crisis deepening, ever more ... END_OF_DOCUMENT_TOKEN_TO_BE_REPLACED

The Syrian conflict remains insoluble for the time being. Yet Europe could start managing it better. By reorganising humanitarian aid supplies, becoming more involved in the ... END_OF_DOCUMENT_TOKEN_TO_BE_REPLACED

Bachtyar Ali sends the hero of his latest novel – "Mein Onkel den der Wind mitnahm" – literally flying. Jamshid is so thin after his years as a political prisoner that a gust of ... END_OF_DOCUMENT_TOKEN_TO_BE_REPLACED

In this essay, renowned Lebanese journalist and writer Hazem Saghieh asks whether the Arab Levant, which stretches from Iraq in the east to Egypt in the west, will remain an ... END_OF_DOCUMENT_TOKEN_TO_BE_REPLACED
Author:
Sonja Galler
Date:
Mail:
Send via mail

END_OF_DOCUMENT_TOKEN_TO_BE_REPLACED
Social media
and networks
Subscribe to our
newsletter