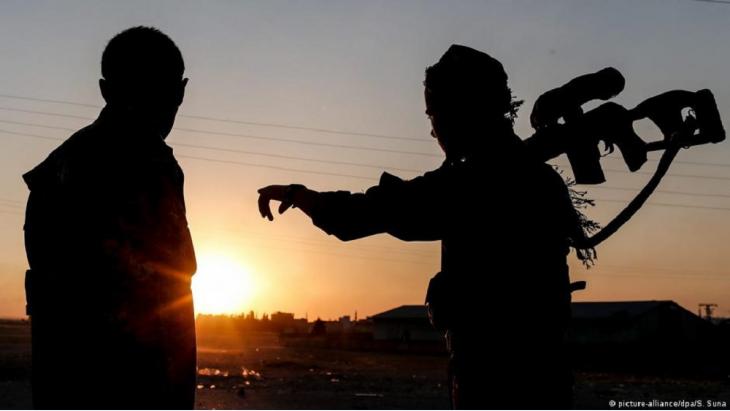 Kurdish autonomy in northeast Syria
Between Assad and Erdogan

The Kurdish Autonomous Administration of North and East Syria controls a third of Syria, but is not recognised by anyone. Attacks by Turkey, a threatened takeover by the Assad regime, dealing with tens of thousands of IS supporters and international isolation complicate people's daily lives. Kristin Helberg reports for Qantara.de from Qamishli

Sabaa Bahrat Square in Qamishli. In the middle, a statue of Syria's ex-president Hafiz al-Assad, at the edge, photos of son Bashar mark the checkpoint leading to a neighbourhood controlled by the Syrian regime. Yellow taxis surge towards the city centre. About 200 metres further on, at the next roundabout – Martyrs' Square – there is a monument to the fallen fighters of the Kurdish People's Protection Units or YPG. And on a wall poster you can see PKK founder Abdullah Ocalan reading in a book. Welcome to Syria's north-east.

Jomart works for the non-governmental organisation PÊL – Civil Waves. He prefers not give his real name, not for political, but for personal reasons. He lives in Qamishli, the most Kurdish city in Syria, right on the border with Turkey. The autonomous administration of North and East Syria, long-hand for Kurdish self-rule, holds sway here. "The Kurdish areas are the quietest in Syria because the local population and the autonomous administration consciously maintain this calm," says Jomart.

The presence of the Syrian regime plays into the Kurdish authorities' hands, he adds. Were the Assad regime not present in Qamishli, the airport, for example, would not function. "After all, nobody co-operates with the autonomous administration; it is not officially recognised by anyone." The autonomous administration realised early on that this form of regime presence would be beneficial. It is a view shared by the local population. "Everyone leaves each other alone – we keep our distance, so that we don't experience the same thing as happened in Homs, Aleppo and elsewhere," he says.

Kurds are among the few winners

In some ways, the Kurds are among the few to have benefitted from the Syrian conflict. In 2011, when much of Syria was overrun with protests, Bashar al-Assad's regime withdrew from the northeast to quell the uprising in the rest of the country. Damascus abandoned the region to the Kurdish PYD, the Democratic Union Party, which is closely linked ideologically to the Kurdish Workers' Party PKK. 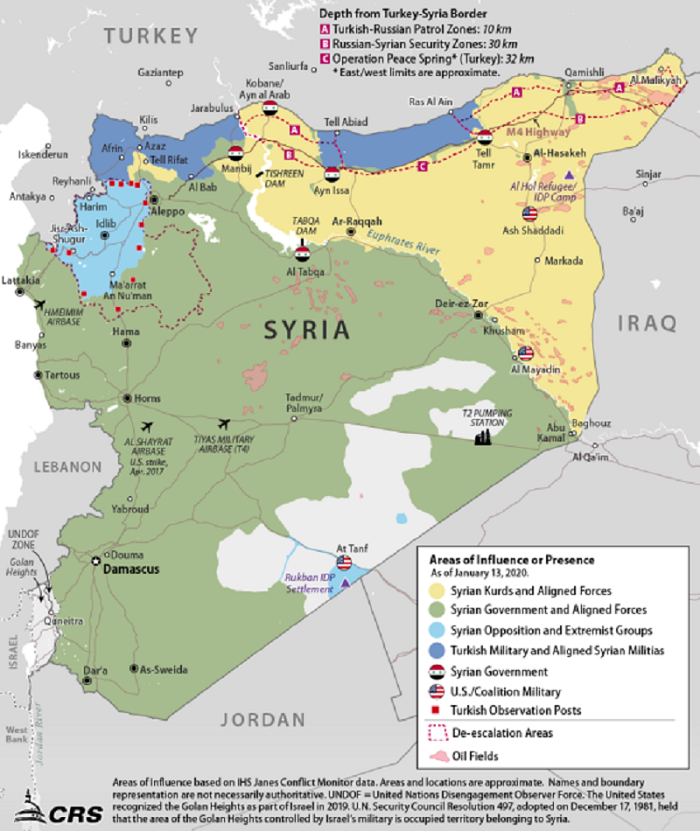 Overview of the balance of power in Syria today: have the Kurds benefitted from the uprising against the Assad dictatorship? "In 2011, when much of Syria was overrun with protests, Bashar al-Assad withdrew from the northeast. He abandoned the region to the Kurdish Democratic Union Party (PYD), closely linked ideologically to the Kurdish Workers' Party, PKK. Since then, Syria's Kurds have been governing themselves – at the same time, their sphere of influence has grown enormously," writes Kristin Helberg

With the help of its People's Protection Units, the PYD initially took control of the Kurdish settlement areas in the north, in the area known as Rojava. Through the fight against IS, the so-called Islamic State, the autonomous region grew in size. In 2015, the Syrian Democratic Forces were founded with American support, a military alliance in which Arab battalions fought alongside the Kurdish People's Protection Units. The areas from which IS was driven out fell to the autonomous administration – including predominantly Arab cities such as Raqqa, Tabqa and Manbij. Since 2018, it has controlled the entire northeast of Syria, a third of the country's territory, under the title of the Autonomous Administration of North and East Syria. Because of its links with the PKK, it remains internationally isolated – after all, the PKK is considered a terrorist organisation not only in Turkey, but also in the USA and Europe.

"There is much propaganda that this is a Kurdish project aimed at sowing division in Syria, with the aim of splitting up the country. The same line is spread by the Assad regime, Turkey, the opposition in Istanbul, the National Coalition and the Muslim Brotherhood," says Abdelkarim Omar, representative of the autonomous administration to the outside world – foreign minister in all but official title. He is tired of the PKK debate. To him it is a view that skews the truth.

"This project is a Syrian project. We have always distanced ourselves from such sectarian conflict," says Omar. "We support the will of the people and are committed to good relations between the different population groups. We want to build a new, democratic and decentralised Syria." 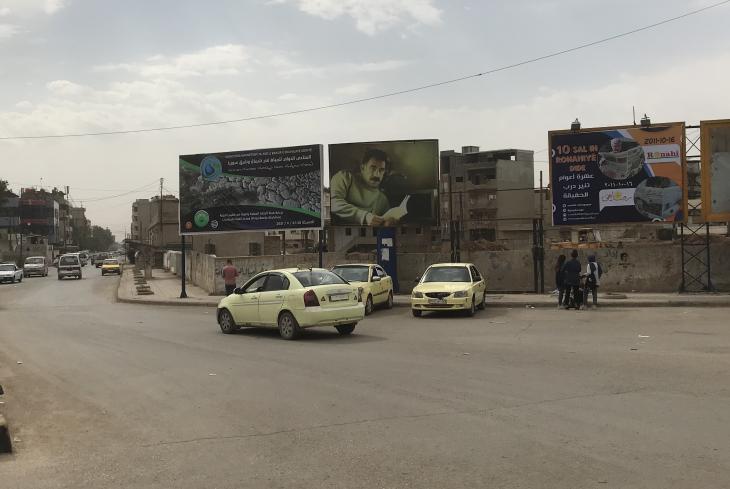 Hoarding on Martyrs' Square in Qamishli showing PKK founder Abdullah Ocalan reading: photos of PKK founder Ocalan, who is revered in north-eastern Syria as an ideological superfather, can be found in government offices, at the roadside as you enter towns and in public places

Building tolerance and understanding between different ethnicities, religions and denominations is important in north-eastern Syria. Not only Arabs and Kurds live there, but also Assyrians and Chaldeans, Armenians, Circassians, Chechens and Yazidis. The "democratic federalism" referred to by the PYD foresees the equal participation of all in grassroots democratic self-administration. PKK founder Abdullah Ocalan developed the idea while in Turkish custody – indeed, since 2005, he has no longer been promoting a Kurdish nation-state, but a federation of autonomous regions. This would allow the Kurds to strive for self-determination without challenging existing state borders.

North-eastern Syria is the field test. Taha Khalil is cautiously optimistic. The 58-year-old writer lived in Switzerland for eight years and is now one of the directors of the Rojava Centre for Strategic Studies – a think tank dealing with social and political issues in the region.

Rojava – project and place of longing for left-wing idealists: with the help of its People's Protection Units, the PYD initially took control of the Kurdish settlement areas in the north known as Rojava. Through the fight against IS, the autonomous region grew in size. Since 2018, it has controlled the entire northeast of Syria, a third of the country's territory, under the title of the Autonomous Administration of North and East Syria. In the Rojava region of northern Syria, the YPG is trying to implement Ocalan's vision of a state. This model of a society organised from below makes the northern Syrian Kurdish region a place of longing for left-wing idealists from all over the world

Millions in Idlib depend on aid coming through a northern border crossing. On 10 July, the UN Security Council votes whether to keep it open. The decision may hinge not only on ... END_OF_DOCUMENT_TOKEN_TO_BE_REPLACED

Mourad al-Marouai was just nine when a landmine killed him on a beach in war-torn Yemen, a tragedy that will haunt his family forever. After a swim, the little boy "suddenly ... END_OF_DOCUMENT_TOKEN_TO_BE_REPLACED

This year’s Morgenland Festival opened with the premiere of Kinan Azmeh’s musical theatre piece, “Songs for Days to Come”, based on fifteen poems by contemporary Syrian poets. ... END_OF_DOCUMENT_TOKEN_TO_BE_REPLACED

Rumi's poems, though generally stripped of their Islamic symbolism, are hugely popular around the world. Yet Islamic mysticism is still very much at the heart of these verses. ... END_OF_DOCUMENT_TOKEN_TO_BE_REPLACED

The Ukraine war is changing the global geopolitical landscape. Ali Khamenei, Iran's most powerful man, is already cosying up to Russia in anticipation of a harsh post-war reality ... END_OF_DOCUMENT_TOKEN_TO_BE_REPLACED

Analyst Iyad El-Baghdadi examines the ongoing tensions between the United States and the two Gulf states – Saudi Arabia and the UAE – and their geopolitical implications in ... END_OF_DOCUMENT_TOKEN_TO_BE_REPLACED
Author:
Kristin Helberg
Date:
Mail:
Send via mail

END_OF_DOCUMENT_TOKEN_TO_BE_REPLACED
Social media
and networks
Subscribe to our
newsletter