This proximity to President Erdogan makes them traitors from the PYD's point of view – after all, Turkey has already attacked northern Syria three times, displacing tens of thousands of Kurds. Suliman Osso is secretary general of the Yekiti Party and a leading member of the Kurdish National Council. The 62-year-old has been campaigning for Kurdish rights for decades, and has been arrested several times – by the Assad regime and by PYD police forces.

In view of the 700 kilometres of shared border, the party veteran campaigns for promoting understanding and tolerance towards Turkey. "It is not in our interest to live in enmity with Turkey," he says. "Although part of Kurdistan is in Turkey and 20 million Kurds live there, we believe that Turkey's Kurdish issue is solely of concern to the Kurds in Turkey and not to the Kurds in Syria. We cannot challenge a country like Turkey militarily." 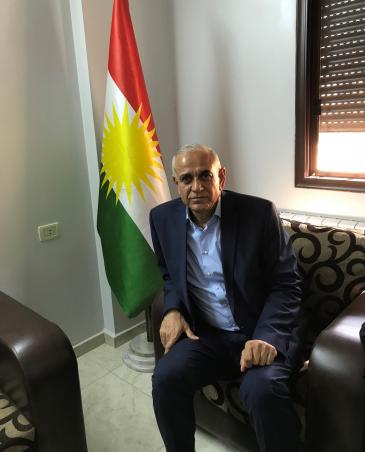 Suliman Osso, secretary-general of the Yekiti Party, is a leading member of the Kurdish National Council and campaigns for tolerance and understanding towards Turkey

The presence of the PKK gave Turkey the pretext for its interference in north-east Syria, says Osso. "There were photos of Ocalan in every border town: the Turks see that as provocation. We want to build something for the Kurds in Syria and not interfere in the conflict between Turkey and the PKK."

Since 2016, Turkey has conquered three large areas in northern Syria and established protectorates there. In view of the unresolved Kurdish question in his own country, President Erdogan is seeking to prevent Kurdish autonomy in neighbouring Syria at all costs – especially if it is under the influence of the PYD. For Ankara, the PYD and the PKK are the same thing: terrorist organisations that threaten the Turkish state.

Turkey is protecting the conquered areas on the other side of the border with the help of Syrian militiamen. These call themselves the Syrian National Army and consist of extremists who, according to the UN Human Rights Council, loot, torture, rape and confiscate Kurdish property. For years, Turkey has been supporting Syrian Islamist groups – in the past they fought the Assad regime, today they mainly see the enemy as being their Kurdish compatriots. Former IS fighters are also said to have joined the Syrian National Army. This is indicated by statements of imprisoned IS members, confiscated documents and dozens of photos analysed by both the autonomous administration as well as Kurdish and international media. Kurdish representative Omar speaks of a direct link between Turkish security forces and Islamic State.

"All IS leaders who escaped are now with the Syrian National Army, we have proof of that. Erdogan is equipping them and using them for his own agenda. He's been sending them to Libya and Azerbaijan as mercenaries," he says. Both threats – jihadist terror and Turkey – are related and cannot be separated, he emphasised. "Besides, Turkey is fighting us economically by turning off our drinking water at the Allouk pumping station." All the areas formerly ruled by IS – Manbij, Tabqa, Raqqa, Deir al-Zor – need Euphrates water for both agriculture and energy production. Therefore, he said, it is a big problem if Turkey withholds the river's water – for farmers and local power generation. "Everything Erdogan does is aimed at destabilising the region, which gives IS the opportunity to regroup," said the Kurdish foreign affairs officer, Abdelkarim Omar.

Tens of thousands of IS fighters and supporters are still sitting in Kurdish prisons and camps today, having to be guarded, cared for, sentenced or re-socialised. Among them are 11,000 women and children from 50 countries, says Omar. The autonomous administration cannot take sole responsibility for them, he says, after all, Islamic State is not a local problem but an international one. Every country should repatriate its own citizens or at least pay for their accommodation, the diplomat demands. So far, individual governments, including Germany, have only hesitantly flown out women and children. The fight against IS earned the Syrian Democratic Forces international respect and the autonomous administration sympathy among the population. Taha Khalil from the Rojava Centre for Strategic Studies lost his daughter in the most serious IS attack in Qamishli. In July 2016, the terrorist organisation blew up an administration building where Khalil's daughter worked. She died with more than 50 other people. 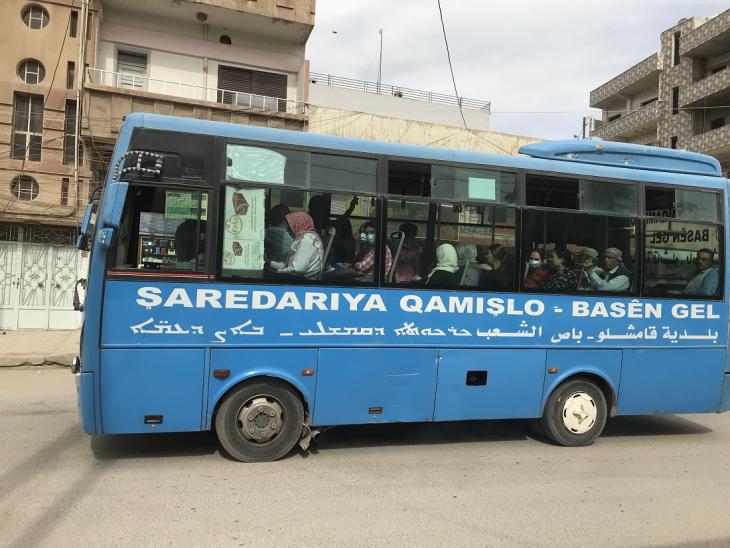 Multilingual signage: a public bus in Qamishli with signs in the three official languages, Kurdish, Arabic and Syro-Aramaic

"The administration protects the region, its people and its property, it prevents the regime or IS from returning, so that's good," Khalil says. But a bureaucracy is now developing, he says, "as if it had been ruling for 50 years and not just seven." There is negligence and corruption, bribery and fraud in the courts. A single document has to be countersigned by 20 bodies, he adds. "We need professionals who know about public administration, who know about economics, real lawyers. After all, we are not dealing with saints, but with people who have lived their whole lives in a dictatorship."

For almost 60 years, the Arab nationalism of the Baath Party has been poisoning the Syrian people, the analyst said. No Kurdish nationalism can help against this, but only genuine pluralism. This is exactly what PÊL, Jomart's civil society organisation, is working to achieve. It organises dialogue forums with up to 200 participants, where mainly young people enter into conversation with various representatives of society.

Religious dignitaries sit down with artists and intellectuals, tribal leaders with politicians and heads of administration. The point is to address problems openly and to respect other opinions, Jomart explains. "We try to bring representatives of opposing or hostile organisations around the same table at events and workshops. Drinking a cup of tea together can already be considered a success. And the autonomous administration is actively encouraging this exchange."

The death of Mahsa Amini at the hands of Iran's "guardians of morality" is only the latest, tragic example – in a neverending chain of state repression and excessive police ... END_OF_DOCUMENT_TOKEN_TO_BE_REPLACED

In "Iran. Die Freiheit ist weiblich", journalist Golineh Atai describes the dogged resistance of courageous Iranian women against the Islamic Republic and the mullahs who have ... END_OF_DOCUMENT_TOKEN_TO_BE_REPLACED

Iranian artist Parastou Forouhar has lived in Germany since 1991. Full of rage, just like the protesters, she hasn't yet given up on the idea of justice. By Julia Hitz END_OF_DOCUMENT_TOKEN_TO_BE_REPLACED

Fariduddin Attar’s "The Conference of the Birds", one of the seminal works of Islamic mysticism, has recently been published in sumptuously illustrated German translation. It ... END_OF_DOCUMENT_TOKEN_TO_BE_REPLACED

The violent death of 22-year-old Mahsa Amini has achieved something the entire opposition has failed to do during the 43-year rule of the ayatollahs in Iran: almost the entire ... END_OF_DOCUMENT_TOKEN_TO_BE_REPLACED

Like Christianity, Europe's history is one of migration. Both have strong roots in the Orient and in cultures thousands of years old. Cultural historian Bernhard Braun invites us ... END_OF_DOCUMENT_TOKEN_TO_BE_REPLACED
Author:
Kristin Helberg
Date:
Mail:
Send via mail

END_OF_DOCUMENT_TOKEN_TO_BE_REPLACED
Social media
and networks
Subscribe to our
newsletter