Nevertheless, the administration would prefer not discuss some sensitive issues in public because it fears opposition, says Jomart. The education system, for example, is one of the most pressing problems in north-eastern Syria. The autonomous administration has taken over almost all of the Syrian regime's schools and is teaching Kurdish children there in their mother tongue for the first time.

However, the degrees from these schools are not recognised anywhere. As a result, many Kurdish families continue to send their children to the few, completely overcrowded schools that are under the control of the ministry of education in Damascus. There they learn in Arabic and get a degree with which they can study anywhere in Syria or even go abroad. 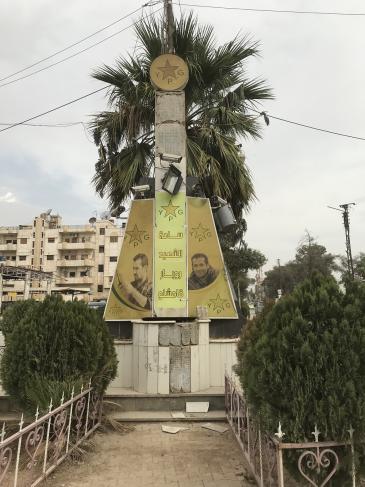 The administration, however, is seeking to establish Kurdish as the language of education; it has invested considerably in further training for its teachers and has opened institutes and universities. When PÊL invited people to an open dialogue about the education system, the authorities initially refused permission, Jomart says. PÊL needs permission for every activity, yet sometimes the activity does not suit the autonomous administration, he says.

"They have this typical image of civil society organisations – they think we are against them and want to harm them," he says. "We paid them a few visits and managed to convince them in the end. The event went so well that the minister of education was very pleased afterwards and said we should organise more meetings like this."

Compared to the early years, the autonomous administration has become more open to criticism, says the activist. In the past, the offices of other parties were closed or attacked, their political representatives threatened and arrested. Today, the administration is keen to improve its image, Jomart explains, which is why it is giving more space to the media, the Kurdish National Council and civil society. About 200 non-governmental organisations are registered in north-east Syria. Should the Assad regime return at some point, most of their representatives would have to flee, says Jomart.

No compromises from Assad

There have been several attempts to reach an agreement with the rulers in Damascus. But Assad has no reason to seek compromises. Russia and Iran secure his rule, the UN provides his population with humanitarian aid, while his Arab neighbours have begun once again to treat him as a head of state – all war crimes notwithstanding. The Syrian regime therefore wants nothing to do with federalism and autonomy, says Taha Khalil of the Rojava Centre for Strategic Studies. "Talks are taking place between the regime and the administration, but only at an intelligence level. To date, Assad has only considered the Kurdish question from a military and security standpoint. For him it is not a political issue. That is the regime's mentality."

The autonomous administration cannot be recognised under international law without an agreement within Syria, agrees foreign affairs envoy Abdelkarim Omar. In practice, many states co-operate with the administration, as the diplomat is keen to point out, but the region urgently needs more investment in infrastructure and the oil industry.

What oil Syria has is in the northeast – it is the main source of income for the autonomous administration. However, in the absence of modern refineries, the crude oil is processed into diesel and petrol by primitive means, resulting in massive air and soil pollution. The international anti-IS coalition has already promised new refineries, says Omar, and the signs from the USA are positive.

The authorities in Qamishli are therefore pinning their hopes on Germany's new federal government. Out of deference to the Turkish president, Germany has so far only been involved in the Arab former IS regions, not in the Kurdish areas near the border. In addition, government funding is handled exclusively through local partner organisations such as PÊL and not in direct contact with the autonomous administration.

That is something the German foreign minister Annalena Baerbock could change, say observers. She could adopt a more confident stance towards Ankara and lift some of the restrictions on German development funds for north-eastern Syria.

Syria and the Arab world: Assad's return to the fold

Solving the conflicts in the Middle East: Tracing the fault lines

Erdogan and the Kurdish conflict: A battle for votes

Kurdish referendum for political relevance: Papering over the cracks in Iraq

A sci-fi film lampooning the Islamic Republic and all that its regime holds sacred premiered quietly at a nondescript venue in Los Angeles in July. The title, “Velayatnameh”, is a ... END_OF_DOCUMENT_TOKEN_TO_BE_REPLACED

The Palestinian militant organisation Hamas, with Hezbollah's help, is building up a military presence in Lebanon, the ultimate consequences of which could be devastating, writes ... END_OF_DOCUMENT_TOKEN_TO_BE_REPLACED

With his fist bump greeting for a man he previously called a pariah, US President Biden has paved the way for Saudi Crown Prince Mohammed bin Salman's return to the international ... END_OF_DOCUMENT_TOKEN_TO_BE_REPLACED

Days of protests across Iran followed the collapse of a high-rise building in the city of Abadan in May 2022. But why has the disaster become such a political issue? Rahman ... END_OF_DOCUMENT_TOKEN_TO_BE_REPLACED

Millions in Idlib depend on aid coming through a northern border crossing. On 10 July, the UN Security Council votes whether to keep it open. The decision may hinge not only on ... END_OF_DOCUMENT_TOKEN_TO_BE_REPLACED

Mourad al-Marouai was just nine when a landmine killed him on a beach in war-torn Yemen, a tragedy that will haunt his family forever. After a swim, the little boy "suddenly ... END_OF_DOCUMENT_TOKEN_TO_BE_REPLACED
Author:
Kristin Helberg
Date:
Mail:
Send via mail

END_OF_DOCUMENT_TOKEN_TO_BE_REPLACED
Social media
and networks
Subscribe to our
newsletter