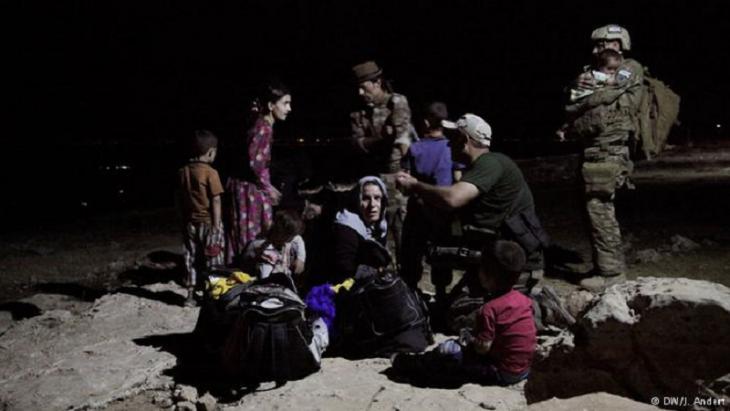 Civilians who are fleeing from the "Islamic State" group near Mosul in Iraq are actively helped by Kurdish peshmerga forces during their escape. Judit Neurink reports from Bashiqa

The frontline at Bashiqa Mountain recently saw over 400 people cross in one week, says peshmerga General Bahram Arif Yassin. They we´re from different villages near Mosul, and even from the city itself. Bashiqa is the nearest point of the Kurdish defense to Mosul, with the city visible on the horizon.

A real battle is hardly fought here anymore, says the general. The "Islamic State" (IS) , or Daesh as the group is called locally, resorts mainly to sending suicide bombers and vehicles filled with explosives toward the Kurds. "The morale of Daesh is low now, they are not strong anymore," Bahram told DW.

A lack of trained fighters has led to even more losses than before, forcing IS to pull fighters away from guarding villages and sending them to the frontline instead.

Because of that there was no longer an IS presence in their village, says Qusai Sabah from Tiliara village, who fled recently with his wife and four children. Now he lives with a brother in the refugee camp of Bardarash.

His brother, who's been there for the past 15 months, made the connection with the peshmerga, and so the night before they fled Sabah contacted the Kurdish fighters.

"We went from home to an unfinished building and with five families waited for the peshmerga to phone," he told DW. They stayed in a village near Bashiqa Mountain for hours. "When it got dark they phoned and said: 'We are watching the place with binoculars and it is safe now for you to come.'" 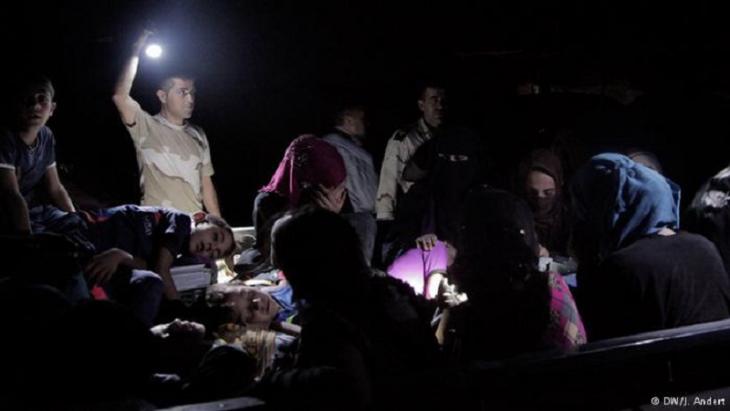 Under the cover of darkness, these refugees rely on the peshmergas' help to get them to safety. The route is risky because of the many mines, but also because sometimes IS at the frontline opens fire on the refugees. If that happens, the peshmerga will use covering fire to help the refugees

They walked for four hours in the dark. "In the villages we knew the roads were clear of mines, but we were afraid about the area between the village of Fathilia and the mountain," Sabah said. But the peshmerga helped them along by shining their torches from their high positions. "We were scared, but we trusted the peshmerga, we followed their footsteps, they know the safe places. If Daesh did see us, they would have killed us."

"It is very dangerous, it's like a death way," Bahram agreed. When asked why the peshmerga actively helped these villagers to escape, he simply said these families deserve help.

With the battle for Mosul getting nearer - locally the month of October is mentioned for the attack - emptying the villages on the way could be part of the military strategy.

In total, the Kurdistan Region is presently sheltering around 2 million refugees and IDPs (internally displaced persons). The battle for Mosul, with its 2 million inhabitants, is predicted to trigger another 500,000 to 1 million IDPs.

General Bahram says that most of the villagers are desperate and have been living without income for months. "Some tell us they have not had something cheap like tomatoes in three months. Because of the poverty, Daesh is losing its position, even though they still have some power to fight and kill people."

Sabah, who like most of the group who fled belongs to the ethnic minority group of the Shabak, said he stayed for so long because of his elderly father. "He had a heart attack and cannot climb the mountain," he said. "He told me to go: 'if you stay here any longer they will kill you.'" His father and mother, both in their 70s, stayed behind.

Abdelaziz Younis, who fled with his two wives and four children from Khorzibad village together with Fahad Abdullah and his wife and four children, also says their elderly parents were a reason to stay. "And we were afraid," Younis adds. "When Daesh saw that someone had fled from the village, they would tighten the rules for six months."

He describes the situation under IS as "like a cemetery, we are walking dead. There was nothing, no water, no electricity, no food… We were watching our children die from poverty. We preferred a fast death trying to get out and getting killed by Daesh to the slow one there. We'd die anyway," he told DW. 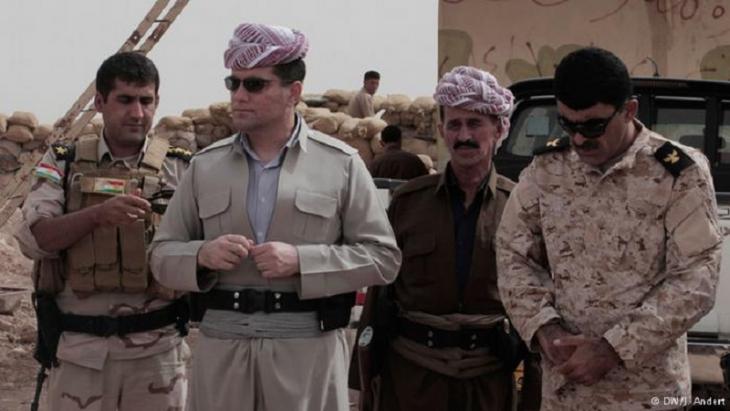 General Bahram says that most of the villagers are desperate and have been living without income for months. "Some tell us they have not had something cheap like tomatoes in three months. Because of the poverty, Daesh is gradually losing its morale and fighting power, even though they still have some power to fight and kill people."

The route is risky because of the many mines, but also because sometimes IS at the frontline opens fire on the refugees. If that happens, the peshmerga will shoot mortar shells at the IS positions, says Bahram, so that his men, using the covering fire, can help the refugees to reach safety.

That happened recently when a 21-year-old Dutch woman called Laura Hansen arrived at the frontline with her husband, who had been fighting for IS, and their two children. Her husband got wounded by IS fire and the woman told the peshmerga to leave him, the general says. "She said to my men: 'He is a bad man and a bad Daesh.'" The wounded man returned to IS lines and his family in the Netherlands have not heard from him since. The woman is now in Kurdish custody being questioned about her role in the IS-declared caliphate.

The general is well aware that IS activists like this man could try to hide amongst the refugees. "When we see a family coming toward us, the peshmerga goes to help. And when they still are far from the frontline, we search them for explosives."

Men and children are made to partially strip to be searched. "We have no problems with them, but we do with the women. Peshmerga respects women and cannot touch them."

As there are no female peshmerga among his men, they cannot be searched. At other frontlines, IS has made use of this by sending in men with explosive vests dressed like women. The general admits it is a problem, but has found a pragmatic way to solve it. "We ask the men about the women, and if they say this is our relative and she is OK, we trust them. But if someone comes without relatives, that is a problem."

The clashes in Baghdad between supporters of Muqtada al-Sadr and pro-Iranian militias show that an intra-Shia power struggle is in full swing. An analysis from Cairo by Karim El- ... END_OF_DOCUMENT_TOKEN_TO_BE_REPLACED

Bachtyar Ali sends the hero of his latest novel – "Mein Onkel den der Wind mitnahm" – literally flying. Jamshid is so thin after his years as a political prisoner that a gust of ... END_OF_DOCUMENT_TOKEN_TO_BE_REPLACED

In this essay, renowned Lebanese journalist and writer Hazem Saghieh asks whether the Arab Levant, which stretches from Iraq in the east to Egypt in the west, will remain an ... END_OF_DOCUMENT_TOKEN_TO_BE_REPLACED

Climate change is taking its toll on communities in Iraq. Younes Ajil turns on the tap in his home but nothing comes out. Villages in the south of the drought-hit country are ... END_OF_DOCUMENT_TOKEN_TO_BE_REPLACED

END_OF_DOCUMENT_TOKEN_TO_BE_REPLACED
Social media
and networks
Subscribe to our
newsletter