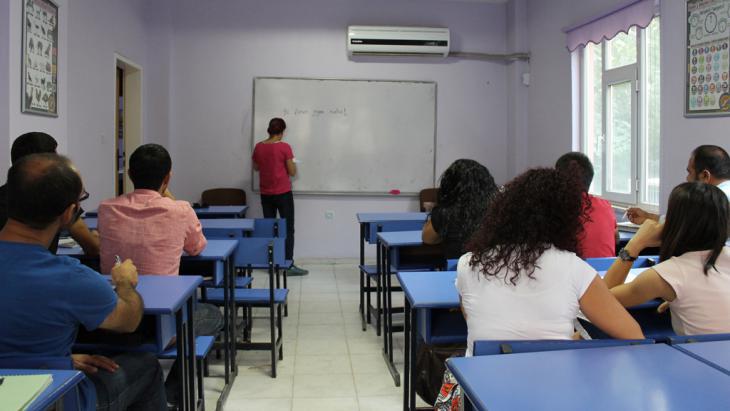 Kurdish in exile
The right to a mother tongue

An estimated 800,000 Kurds from various countries live in Germany. Keeping up their mother tongue has proved difficult. Ceyda Nurtsch on the efforts to maintain Kurdish language and literature in the German diaspora, and pass them on to future generations

An estimated 800,000 Kurds live in Germany today. In Europe, the figure is thought to be a little over a million. There are no precise figures, since Kurds are a minority in various nations: Turkey, Iraq, Iran, Syria, and now in the countries of the diaspora.

The fact that, as a minority, they live with various dominant national languages, is also one of the difficulties the diaspora Kurds face in maintaining their language. In Germany, too, people have only become aware of the Kurds' special situation very late on, as Eva Rudolph from the Hinbun project – an international advice centre for women and their families – explains.

"When the first Kurds came to Germany from Turkey, either as 'guest workers' or political refugees in the 1960s and 70s, and particularly in the 1990s, the German authorities treated them as Turks. Which meant, for example, that they were assigned Turkish interpreters, whom they couldn't understand."

Today the Berlin project, which was founded 30 years ago, carries out cultural work, including literacy courses in Kurdish. "These days, we know it's important to be able to read and write in your mother tongue in order to learn another language better," explains Rudolph. The need is great, she adds, as the written culture in Kurdish is not particularly well developed.

The Kurdish language consists of three groupings: first is Northern Kurdish, or Kurmanji, spoken by most Kurds in Turkey and the border regions with Syria, Iran and Iraq, and by most diaspora Kurds and those living in the former Soviet states. Central Kurdish, or Sorani, is spoken in Iran and Iraq, and South Kurdish is spoken in southern Kurdistan, the Kermanshah province in Iran, and Zazaki in Eastern Anatolia.

For Kurds living in Germany, access to their mother tongue varies depending on their experiences in their homeland. The Turkish state TV channel TRT Kurdi (formerly known as TRT 6) in Turkey only started broadcasting in Kurdish a few years ago, when Kurdish languages courses also began to be offered and the first Kurdish language teachers were trained at Mardin University – though they are currently on hunger strike, demanding their permits to teach. Meanwhile, those from Kurdish Iraq are able to attend schools and universities that teach in their mother tongue.

Broadcasting in Kurdish 24 hours a day: the television channel TRT Kurdi, formerly known as TRT6, began broadcasting in Turkey in 2009. It sees itself as an alternative to Roj TV, which is said to have links to the PKK. It offers programmes in the Kurmanji and Sorani dialects

This can also be seen at Hinbun, says Eva Rudolph: "You sense that the women from southern Kurdistan live out their culture quite naturally, but with women from Turkey you can still see their fear of persecution."

One of the people campaigning to make sure his language is not forgotten is Ciwan Tengezar, who comes from Mus in the south-east Anatolian province of Varto. He came to Germany as an asylum seeker at the end of the 1990s. Today, he lives and works in Berlin as a musician and Kurdish teacher. "All Kurds who have a good command of their language have learned it later in life, on their own initiative," he says, referring to Kurds from Turkey in particular.

He and his family have experienced first hand what it means not to be allowed to speak your own language. "My grandfather," he remembers, "rounded up all the kids from the street in the 1940s and told them they weren't allowed to speak Kurdish outside. A policeman had listened and counted seven words of Kurdish, and so he had to pay a fine."

As Ciwan himself was growing up in Varto in the 1960s, and then later in Izmir, in western Turkey, he was only allowed to speak Kurdish with the older people at home. "And that means the vocabulary there remains limited," he explains. It was only in Berlin that he was able to speak his language without fear.

Since then, he has made it his mission to master his language, including on a literary level, and pass on his knowledge to others. He has translated books, published a newspaper, recorded CDs of Kurdish children's songs, and compiled a textbook. And it is thanks to his efforts that, since 2012, Kurmanji has been taught to adult learners at the Volkshochschule Berlin. Most of his students are either Kurds who want to improve their mother tongue, or people who are married to Kurds. "Up to now I've only had one Turkish student," he says.

Kurdish left out in the cold

He also teaches Kurdish in schools. But it isn't always easy, as he explains. He often has head teachers tell him: "Kurdish is a political language. My doors are closed. I don't want any trouble". "The Turkish lobby in Germany has a lot of political and economic influence," he says. "German schools give in to the demands of Turkish parents, who are in a clear majority over the Kurdish parents." But Tengezar is a visionary: his dream is to open a school that will teach the three Kurdish languages, as well as Turkish and Armenian.

Feryad Omar, who teaches at the Freie Universität Berlin, has been working to establish Kurdish at an academic level. At the end of the 1970s, Omar, who was then a lecturer in Kurdish language and literature in Sulaymaniya, Iraq, came to the Freie Universität as a young academic. Since then, he has taught Kurdish dialects, literature and history as part of Iranian Studies. 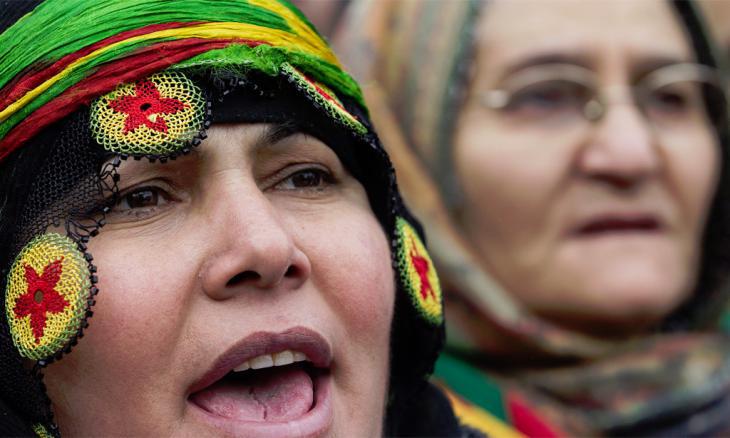 Kurdish women demonstrating for greater cultural autonomy: Kurdish is still only taught at Turkish schools like a foreign language, the same as German or English. This is why many Kurds in south-eastern Turkey are calling for official recognition of the Kurdish culture and for Kurdish to be taught as a mother tongue in Turkish schools

Orientalists in Germany have taken an interest in Kurdish language since the mid-nineteenth century. The Orientalist and philologist Ferdinand Justi published the first Kurdish grammar book in 1880, and the Orientalist Oskar Mann brought Kurdish manuscripts to German libraries.

The academic landscape as a desert

In spite of this, when Omar arrived at the university in Berlin, he found the academic landscape in his subject area to be "a desert". There were hardly any teaching materials and no methodology to speak of. He got to work straight away, bringing out the first Kurdish-German dictionary in 1992, with 35,000 key words - "a sensation, at the time," as he recalls. More dictionaries and textbooks followed, he says, to open the door to the language and thought of the Kurdish people. It is thanks to his dedication that the Freie Universität Berlin teaches Kurdish like no other university in Germany.

"In my projects, I've paid particular attention to the new generation of Kurds, who were born and grew up in Germany," says Omar. His teaching materials are also written using both the Arabic and the Latin alphabet, so that Kurds from different countries can use them.

As well as those looking for a deeper knowledge of their mother tongue, the institute also draws in students from related subjects like Turkish and Arabic Studies, and political science. At the same time Omar, who has also published two volumes of his own poetry in German, is founder and head of the Institute for Kurdish Studies, which has been publishing teaching materials and individual literary works since 1988.

For some time now, he has been intensifying the exchange with universities in Iraqi Kurdistan. Omar hopes that his work in the diaspora will flow back into the Kurds' countries of origin, providing a contribution to international Kurdish Studies.

Ceyda Nurtsch
© Qantara.de 2015
Translated from the German by Ruth Martin

Giessen, Eichsfeld, Kusel, Berlin – cars bearing old German number plates are the latest trend on the streets of Cairo. Many Egyptians regard the discarded plates as chic. What ... END_OF_DOCUMENT_TOKEN_TO_BE_REPLACED

Tunisia has been going through a severe economic and political crisis in recent years. More than one in three young people there are unemployed. For many skilled, qualified and ... END_OF_DOCUMENT_TOKEN_TO_BE_REPLACED

German imams have publicly expressed their solidarity with the women of Afghanistan. In a letter of protest, the clerics say that the Taliban regime's decree barring women from ... END_OF_DOCUMENT_TOKEN_TO_BE_REPLACED

At the end of every year, the team at Qantara.de gives you a run-down of the ten most-read articles on the site over the past 12 months. Here is a quick overview of the stories ... END_OF_DOCUMENT_TOKEN_TO_BE_REPLACED

Social engagement is often motivated by religious factors. A new book explores the background to these community efforts and appraises how effective they are in helping to ... END_OF_DOCUMENT_TOKEN_TO_BE_REPLACED

The government in the Netherlands, one of the last European nations to abolish slavery, has made an historic apology. But some feel that there is still a long way to go. By Ella ... END_OF_DOCUMENT_TOKEN_TO_BE_REPLACED
Author:
Ceyda Nurtsch
Date:
Mail:
Send via mail

END_OF_DOCUMENT_TOKEN_TO_BE_REPLACED
Social media
and networks
Subscribe to our
newsletter