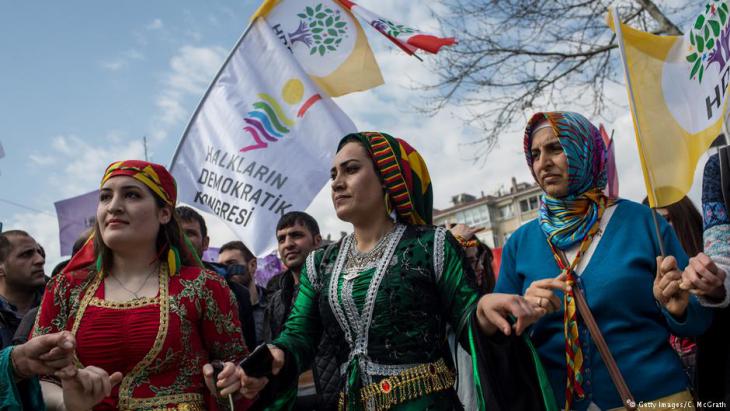 The future of a people: Good Kurd, bad Kurd

When it suits the political agenda of those in power, the Kurds are seen as good patriots. The rest of the time, they are condemned as villainous traitors. It′s a situation that is repeated in Turkey, Syria and – argues Hoshang Ossi – within the Kurdistan Workers′ Party (PKK) itself

In the Turkish media and among the protagonists of the current Turkish drama who are involved in one way or another with the situation of the Kurds in Turkey there is a division: a political, qualitative and moral sorting of the Kurds into two different groups. Those who stand by the state and support the Islamist government under Recep Tayyip Erdogan are good, patriotic Kurds and form "the overwhelming majority".

But the Kurds who insist that the state must constitutionally affirm the existence of a people that counts over 20 million in Turkey alone and who demand recognition of this people's political, cultural, administrative and constitutional rights, are the devious Kurds: terrorists and separatists who make up only a tiny minority.

They are referred to as a scattered mob motivated by hatred, who are attempting to obtain recognition, honour and a state of their own by devious means. So it is up to the good Kurds to turn against the bad Kurds and demonstrate their own patriotic attitude.

This system of subdividing the Kurds in Turkey, which has existed under every regime thus far, has roots reaching back to the beginning of the 20th century, when Turkey cast off its sultanate to forge a path toward a secular state.

More precisely, it can be traced back to the intermezzo when the government in Ankara under the leadership of Mustafa Kemal (Ataturk) temporarily shared power with the regime in Istanbul led by the Sultan and his Grand Vizier.

The regions populated by approximately 40 million Kurds are spread throughout Iraq, Iran, Syria and Turkey. This figure remains somewhat speculative, however, since ethnicity and native language are not recorded in official censuses

The government in Ankara considered its Kurds to be "good and heroic patriots", while the Kurds on the other side were stamped as traitors to the fatherland and spies who deserved to be exterminated. And the opposite attitude was of course held by the Istanbul regime.

However, after Ataturk had overthrown the Sultan's regime and consolidated his rule, he turned his attention to the issue of the Kurds, setting out to massacre them all, the good and the bad, to make an example of them.

Indeed, not only did he renege on all promises that had been made to the Kurds and all treaties, he denied the very existence of them as a people – and this after they had helped him to found his state and rise to power.

Today, the "Kurdistan Workers' Party" (PKK) is not the only force that continues to perpetuate this unfortunate tradition, seemingly infected by the pathological classification of Kurds into two camps, with its own good and heroic Kurds vested with the legal right and duty to turn against the bad Kurds and wipe them out.

And when the PKK speaks today of the issue of the Kurdish people, it never fails to point out that it represents a nation that counts more than 40 million people. All those who have split off from the party (since its founding in 1978), who number in the tens of thousands, are in turn considered by the PKK to be traitors, thugs and agents.

In addition, all the Kurds who support Erdogan's "Justice and Development Party" (ACP) or the other Turkish parties and who account for millions of people, are of course likewise turncoats and stooges.

And the same label is appended to the millions of Iraqi and Syrian Kurds who are followers of the "Kurdistan Democratic Party" (PDK) headed by Massoud Barzani: they are nothing but traitors and lackeys of Erdogan.

Yes, apparently the tens of thousands of supporters and followers of the "Kurdish National Council in Syria" are also traitors – henchmen of Erdogan, IS and the terrorist al-Qaida group Tanzimat – simply because the "National Council" is part of the opposition alliance fighting against the Assad regime!

And any journalist who dares criticise the PKK or its Syrian offshoot, the "Democratic Unionist Party" (PYD), is considered a traitor who has sold not only his article but his soul. If we are to believe the calculations of the PKK, we can conclude that about 70% of all Kurds must be traitors, agents and Erdoganists, while the remaining 30%, who follow Abdullah Ocalan′s lead, are the noble patriotic Kurds. 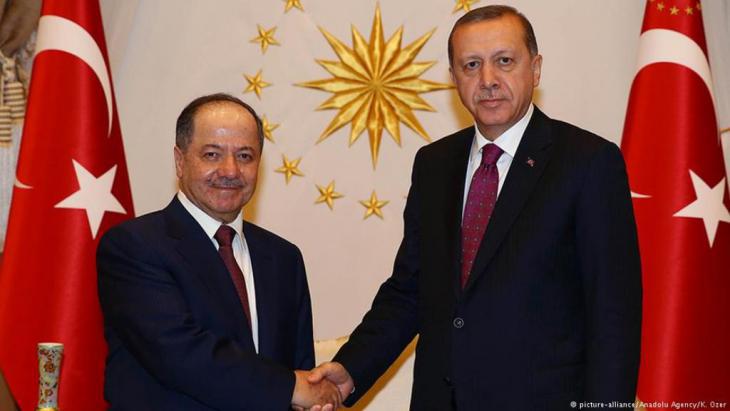 Negotiations in Ankara: Massoud Barzani, since 2005 de-facto president of the autonomous region of Kurdistan in northern Iraq meets the Turkish president, Recep Tayyip Erdogan. He needs the support of Turkey for the up-coming referendum regarding the independence of Kurdistan from Iraq. Iran and the USA have already voiced their disapproval

The PKK and its supporters are apparently unable to understand that criticism of Erdogan's system or of the Syrian opposition does not automatically connote a desire to curry favour or to flatter. And that tacit acceptance of the violation of the rights of all Kurds who stand in opposition to the party cannot be an effective party policy.

Or that criticism directed against the PKK and its Syrian branch does not necessarily mean advocating Erdogan's policies and endorsing his crimes against the Turkish Kurds. Indeed, they are not even able to comprehend that the Kurdish question – not only in Turkey – is bigger than the PKK and its leader.

This grotesque situation is prompting the regime in Syria to apply the exact same standards to classifying "its own" Kurds as in Turkey. They are good, patriotic Kurds, whom the "Democratic Unionist Party" is trying to win over either openly or clandestinely, along with Omer Ossi, Ammar Bagdache, Qadri Jamil and many others.

The "Kurdish Alliance", on the other hand, or those who took part in the revolution against the Assad regime, are traitors and defectors.

And by the same token, the opposition alliance considers its own Kurds great patriots, brave and heroic revolutionaries, while all other Kurds, in particular the partisans of the "Democratic Union", are nothing more than vile traitors and agents. In this way, the regime and the opposition have been able to reach a common understanding to take action against the Kurds, while the Kurds continue to wage their own indiscriminate, senseless skirmishes.

The only thing left to note is that a third group of Kurds still remains who criticise the Turkish Erdogan system as well as the PKK, who are sceptical of both the Syrian opposition and Assad's regime. And these people perhaps represent the greatest threat to a continuing division of the Kurds and their choice to keep fighting in the trenches of the others.

Hoshang Ossi is a Kurdish author and political analyst who writes for leading Arab media outlets.

The "maqama", a classical Arabic form of prose-poetry, is still almost unknown in Germany – as is the name of the 11th-century Baghdad poet Ibn Naqiya. A new translation has the ... END_OF_DOCUMENT_TOKEN_TO_BE_REPLACED

Two and a half years since its liberation from the Islamic State group, large areas of Mosul still lie in rubble. Germany is contributing in a variety of ways to the ... END_OF_DOCUMENT_TOKEN_TO_BE_REPLACED

The assassination of the Iranian general Qassem Soleimani in a surprise U.S. drone strike is being used by the Islamic Republic of Iran to political ends, says Iranian journalist ... END_OF_DOCUMENT_TOKEN_TO_BE_REPLACED

The upheavals of the past year in the MENA region are arguably as momentous as those of the Arab Spring in 2011. Yet perhaps the biggest difference is that our interest seems to ... END_OF_DOCUMENT_TOKEN_TO_BE_REPLACED

For 12 years, Nihad Salim Qoja was the mayor of Erbil, capital of the autonomous Kurdish regions of Iraq. Christopher Resch spoke to the local politician in Erbil about the future ... END_OF_DOCUMENT_TOKEN_TO_BE_REPLACED

Trump’s sweet revenge could swiftly turn bitter, after all the U.S. attack is a direct declaration of war against the Iranian Revolutionary Guard and its elite Quds troops ... END_OF_DOCUMENT_TOKEN_TO_BE_REPLACED

Comments for this article: The future of a people: Good Kurd, bad Kurd

"Those who are not with us, are against us"

This is one of the oldest logical fallacies in civilisation. The truth in almost all these divisions as that many people don't know about the different sides; even more people don't care; and the vast majority just want to be left in peace, to get on with their lives. So it's actually: