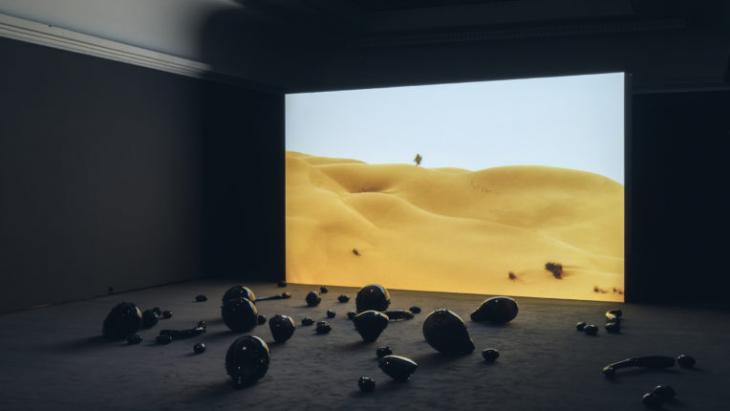 Kuwaiti artist Monira al-Qadiri
In awe of the cosmos

With "Holy Quarter" by Monira al-Qadiri, Munich’s Haus der Kunst gallery is showing a work by one of the Gulf region’s most significant contemporary artists, in an exhibition that runs until the beginning of June. By Claudia Mende

Sand, light and rocks. Monira al-Qadiri’s installation "Holy Quarter" at the Haus der Kunst doesn’t display any classic desert fantasies. Rather, these are striking images of a landscape far from any civilisation.

The artist gave an introduction to her piece at the opening of the exhibition in Munich. It consists of black glass sculptures distributed around the room, and a video story that also features text and music. The images on the large screen in the darkened room are very powerful.

You can sense that al-Qadiri is engaging artistically with global issues, such as the question of what the future holds for a human race at the mercy of the climate crisis. But her perspective on these issues is expressly Arab.

Impressions of the "empty quarter"

Across the screen flicker images of sand dunes, rock formations and the great expanse of the  "Rub al-Khali" desert, the "empty quarter" that lies between Saudi Arabia, Oman, Yemen and the United Arab Emirates. A single shrub grows out of a sea of sand. The video story demonstrates how small a human being is when faced with the forces of nature. It inevitably gives rise to questions about the meaning of life and the roots of human existence.

Al-Qadiri was born in 1983 in Dakar, the capital of Senegal. But her parents come from Kuwait, where she grew up. At the age of 16 she was drawn to Tokyo, where she studied multimedia art, gaining her doctorate there in 2010. After several years in Beirut, the artist now lives in Berlin.

The film, shot in the "empty quarter" with the help of a drone, forms a unified whole with the round black glass sculptures in front of the screen. One important starting point for the multimedia project was the story of the British explorer St. John Philby, who travelled around the "empty quarter" in the 1930s.

A fictional being with a mythological quality

In 1932, the Orientalist was searching for the ruins of an ancient city in this hostile environment when he became the first European to discover the Wabar crater. The British explorer took it to be an extinct volcano, but it had actually been created by the impact of meteorites. Wabar is regarded as the best-preserved example of a crater caused by a meteorite anywhere in the world.

But al-Qadiri sees more than a geological attraction in the remains of the meteorite. In her installation, Wabar becomes a fictional being with a mythological quality, who fell to earth from outer space. In the audio sequences played over the video, Wabar speaks words from St. John Philby’s diary mixed with notes from scientific journals and religious poetry.

"When you hold these pieces of meteorite in your hand, you can’t help but get a spiritual feeling for the endless vastness of the universe to which we are connected," she explains.

Past attempts to reconcile logic and belief within Islam tend to be dismissed today – not because they lack merit, but because they were politically defeated, argues Mustafa Akyol END_OF_DOCUMENT_TOKEN_TO_BE_REPLACED

We are in favour of human rights. But One Love armbands are self-righteous and ignore some fundamental issues. Stefan Buchen examines the debate surrounding the World Cup in Qatar END_OF_DOCUMENT_TOKEN_TO_BE_REPLACED

November 2022 sees the Arab world firmly in the spotlight with the COP27 in Egypt and the FIFA World Cup in Qatar. Public trust in MENA governments is weak, thanks to their ... END_OF_DOCUMENT_TOKEN_TO_BE_REPLACED

Lamya Kaddor, MP for Germany’s Green Party, visited Qatar with a group of parliamentarians. In interview with Claudia Mende, she advocates a differentiated picture and urges that ... END_OF_DOCUMENT_TOKEN_TO_BE_REPLACED

"Rebel Game: The Power of Football in the Middle East and the Qatar World Cup", an anthology published by Middle East researchers Jan Busse and Rene Wildangel, takes the upcoming ... END_OF_DOCUMENT_TOKEN_TO_BE_REPLACED 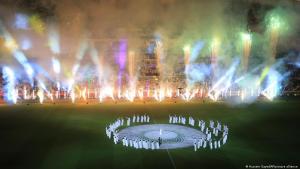 Qatar’s hosting gig may have propelled the country into the international spotlight and impacted the domestic debate on social reform, but has there been any lasting progress? By ... END_OF_DOCUMENT_TOKEN_TO_BE_REPLACED
Author:
Claudia Mende
Date:
Mail:
Send via mail

END_OF_DOCUMENT_TOKEN_TO_BE_REPLACED
Social media
and networks
Subscribe to our
newsletter