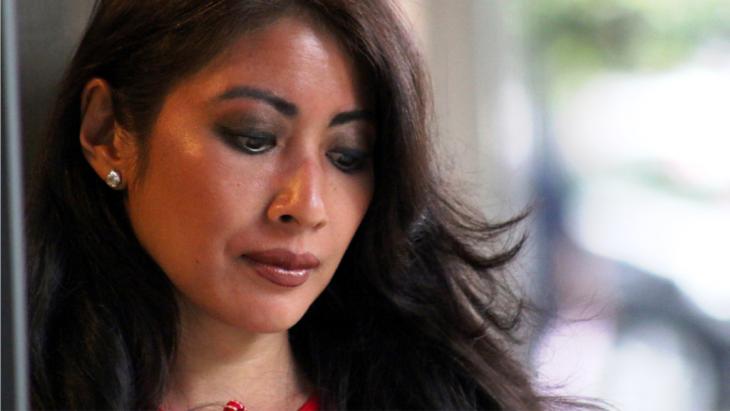 In her novel "The Question of Red", Indonesian author Laksmi Pamuntjak effectively combines the multi-faceted nature of the island state′s sociopolitical system and its bloody recent history with the fate of her fictional protagonists. Bettina David read the book

On the Islamic island of Java, many people are named after figures from the Hindu epics Ramayana and Mahabharata, populated by gods and heroes – names that still stand for beauty and gallantry, grace and wisdom. However, as Laksmi Pamuntjak writes at the very start of her novel "The Question of Red", you won′t find an Amba there - her fate in the Mahabharata seems too awful:

The king′s daughter, promised to King Salwa, is kidnapped by the mighty warrior Bhisma. In the end, she is cast off by both men: Salwa rejects her, and Bhisma, bound by a vow he has taken, cannot accept her love. Re-born as the Amazonian Princess Srikandi, she exacts terrible revenge, killing the indomitable Bhisma. But with Bhisma's horrific death - hundreds of Srikandi's arrows bore into his body - the war between the brothers Pandawa and Kaurawa also comes to an end. The enemy camps are united in grief for the great Bhisma.

In her sweeping first novel, Laksmi Pamuntjak has taken on no less a task than writing this ancient tale anew, connecting the myth to more recent Indonesian history, the course of which has been just as bloody.

Her heroine, Amba, grows up in the 1950s in a small provincial town in Central Java. In the depiction of her childhood, the traditional Javanese world that you might find in an ethnographic picture book is brought to life before your eyes: her father is a teacher, his understanding of the world deeply saturated in tolerant Islamic-Javanese syncretism. He loves shadow puppetry and the Hindu-Javanese legends performed through it. Her mother, meanwhile, is a former singer with a gamelan orchestra. Her main concern is to push her daughter into a speedy marriage with the likeable Salwa. Her father shows more understanding for his eldest daughter's thirst for knowledge - Amba would prefer to study English first at university in Yogyakarta. 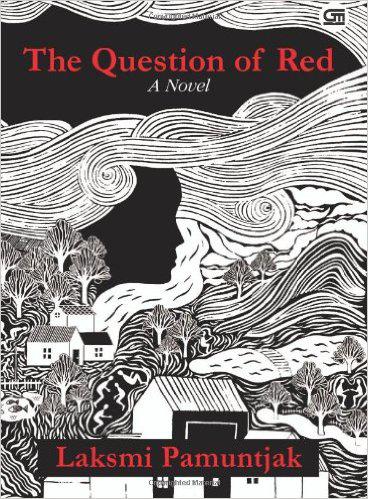 For "The Question of Red“ the 43-year-old author Laksmi Pamuntjak chose the epic form to present the fallout from the events of 1965: decades later a woman is on a quest to find her lover, who was abducted to the prison island of Buru during the sixties purge

But already, social polarisations are starting to emerge; these will intensify and, in the mid-1960s, lead to one of the largest mass murders of the twentieth century. Amba′s father, for whom the preservation of national unity is more important than anything else, votes for Sukarno′s nationalism in the 1955 election, while his wife sympathises with the Communists. In Salwa's family, the insurmountable differences between Islamic traditionalism and modernism cause tensions to develop. For Amba, the poems of writers such as T.S. Eliot and Sylvia Plath open up a whole new world beyond these deepening local divisions.

Although she is already engaged to Salwa, she falls head over heels in love during a short trip to Kediri in East Java with Bhisma Rashad, a doctor newly returned from his studies in Zurich. It is the summer of 1965, and the country is on the brink of civil war. Sukarno′s populist rhetoric of an alliance between nationalist, religious groups and Communists ("NASAKOM") disregards the social tensions in rural parts of Java, and doesn′t mention the role of the army, one of the state′s most important centres of power.

As the political situation reaches a head, and on 30 September 1965 finally leads to a momentous attempted coup and the murder of six high-ranking generals, Amba and Bhisma have a short-lived, passionate love affair.

In the chaos and violence of those October days, they lose each other. Amba, who senses a new life starting to grow inside her, manages to save herself. Bhisma, however, is arrested – he was friends with Communists. At the start of the 1970s, under the Suharto regime, he is imprisoned in one of the notorious camps for political prisoners on the East Indonesian island of Buru.

Forty years later, Amba learns of Bhisma′s death on Buru. She goes in search of information, hoping after decades of agonising uncertainty to find an answer to her questions about him, his love for her and the fate that binds them together.

The novel, divided into seven "books", switches expertly between love story and historical chronicle, poetic interludes and personal memories. Pamuntjak′s link between the many socio-political layers that make up the island nation, its bloody recent history, and the fate of her protagonists, is convincing on a literary level.

"Book 4", on Bhisma′s disappearance in 1965, consists of a single large X – language can hardly do justice to the obliteration of a person, the silence about his fate, and the speechlessness in the face of the violence that has gripped the country. Only in the period after Suharto can Amba, who is now over 60, begin to work through her personal history – which is also that of Indonesia – with the aid of letters from Bhisma that were never sent from the prison camp.

To this day the mass murders of that time, to which more than half a million people fell victim, are a taboo subject. The murderers were never brought to trial – in fact, more than 15 years since the end of Suharto′s dictatorship, they still enjoy the greatest respect and continue to occupy influential positions. There has never been an official reappraisal of what happened, even though there have been many dedicated initiatives since 1998 on both a national and a local level, to give the victims back their voices and stop them being forgotten. 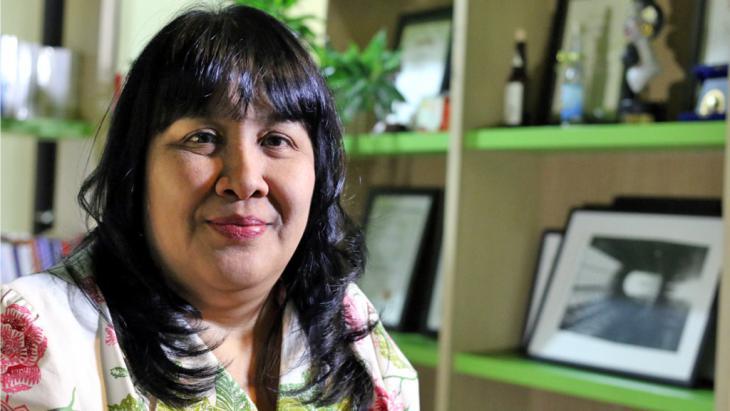 Haunted by Suharto: in her novel ″Pulang″, Leila Chudori addresses the Suharto legacy and its impact on modern Indonesian society

"The Question of Red" is without doubt one of the most important and literarily successful novels to take on the traumatic consequences of the events of 1965/66. Having said that, the press may be a little premature in their celebration of authors like Laksmi Pamuntjak, Leila Chudori and Ayu Utami – all linked to the Salihara Cultural Centre in Jakarta – whose works supposedly dare to break the silence for the first time. This has caused outrage among authors critical of Salihara, including Linda Christanty and A.S. Laksana. They have rightly pointed out that even under Suharto, authors such as Umar Kayam and Ahmad Tohari produced a great deal of criticism, which took a lot more courage then than it does now.

Two contemporary novels about the traumatic events of 1965

"Amba" – the title of the Indonesian original – came out in 2012, and Leila Chudori′s novel "Pulang", which also deals with the consequences of 1965, was published the same year. It is hardly possible to talk about the first novel without mentioning the second.

Both books repeatedly reference the world of Javanese shadow-puppetry. They use it to continue telling traditional myths in new ways, though the books also serve the orientalising view of the West, which has idealised shadow puppetry ever since the colonial era. In this view, it becomes a timeless symbol, revealing everything about a Javanese "soul" that has remained almost untouched by Islam.

Western poetry plays an important role. The protagonists of both novels are extraordinarily well-read. This reflects the idea of a "world culture", which has exerted a great influence on the self-image of intellectuals in Indonesia since the mid-twentieth century. Placing themselves within this tradition, the secularly-oriented authors also disengage from Islam, which as a global ideology is currently having an increasing impact on the thinking of Indonesia′s urban middle classes.

The past is primarily dealt with by focusing on the fate of "innocent" victims: in both Chudori′s and Pamuntjak′s books, the central protagonists Bhisma and Dimas sympathise with Communist ideals, but express clear reservations about any form of party politics, and are not party members.

The search for a depolarising middle way

Rather than providing polarising portrayals of good and evil, both authors attach great importance to gradations of grey. That in itself is an important step, after more than 30 years of heavy anti-Communist indoctrination and the demonisation of all leftist thinking by the Suharto regime. The focus on the "grey centre" does admittedly avoid a deeper examination of the polarisation that split society at the time. The world of committed Communists, massacring soldiers and militias remains in the background in both novels, part of a disastrous political dynamic that brings calamity and suffering on the books′ protagonists.

If you believe the reviews on goodreads.com, Chudori′s "Pulang" caters to Indonesian readers′ taste for light novels more than Laksmi Pamuntjak′s book, which is more of a literary heavyweight. Arguably the latter is more likely to appeal to Western tastes. At the same time, both novels are very Indonesian: they adopt a westernised stance, and yet, despite their aim to enlighten readers, maintain a balanced position in the middle ground, avoiding direct confrontation.

With its traditions of neutrality and non-alignment, Indonesia has had to tiptoe around the Ukraine war debate. Pro-Russia sentiment in the region complicates Jakarta's foreign ... END_OF_DOCUMENT_TOKEN_TO_BE_REPLACED

Calls for an environmentally-conscious form of Islam are growing in Indonesia, as climate change poses enormous ecological challenges for the country. Experts say it could change ... END_OF_DOCUMENT_TOKEN_TO_BE_REPLACED

Indonesia has become a primary battleground between democratic and autocratic visions of Islam in the 21st century, with Nahdlatul Ulama pitted against Abdullah bin Bayyah, a ... END_OF_DOCUMENT_TOKEN_TO_BE_REPLACED

Research project "The Global Qur'an", brainchild of Professor of Islamic Studies Johanna Pink and sponsored by the European Research Council, analyses the history and ... END_OF_DOCUMENT_TOKEN_TO_BE_REPLACED

At a time when even some rich democracies are electing con men as their political leaders, the success of Indonesian President Joko Widodo deserves wider acclaim and appreciation ... END_OF_DOCUMENT_TOKEN_TO_BE_REPLACED
Author:
Bettina David
Date:
Mail:
Send via mail

END_OF_DOCUMENT_TOKEN_TO_BE_REPLACED
Social media
and networks
Subscribe to our
newsletter