Laleh Seddigh
Donning a Headscarf in the Cockpit

Laleh Seddigh is the star of Iranian car racing. The 30 year old driver had to fight hard to be accepted in the profession. Fatma Sagir met the young woman in Tehran 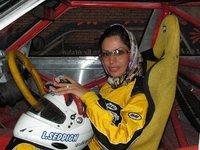 ​​Northern Tehran is currently experiencing a culture shock. Those expecting to see women in chadors and men with heavy beards will be taken aback. American 1950s-style clothing and neo-punk are the dominant fashion among young Iranians. Elvis has seen a revival here.

And the women? They are swimming in a sea of Gucci, Chanel and Prada. Tight, wrap-around clothes, tube jeans and the obligatory headscarf. And underneath it: loads of hairspray.

As we wait in the midst of this part of the city, honking taxis are speeding by, people rushing by, policemen and the morality police are on the lookout for breaches of the dress code and conduct rules. A silver Mercedes of the latest model and with dark windows arrives out of the chaos and drives toward us. A door opens. We look inside. Yes, there she is: Laleh Seddigh, Iran's biggest female star in race car driving.

She smiles and asks us to have a seat. We speed by the ugly, gray-brown buildings on all sides. We keep going. We eventually arrive at what used to be an old sawmill site, now a racing stable with a new test track. The 30-year-old racer slips into her overalls.

Clothing as a critique

A woman is arrested for disobeying the dress code

​​For the past eight years, this has been her professional garb. Laleh, which means "tulip," is from a sport-loving family. Two of her three siblings are also active sportswomen. And she herself already has a career in horse jumping behind her. "I love speed," she says. Her expression is defiant. "We are Muslims and yet we can still love the life we're living," she says.

If you want to understand the discrepancy between the state and its people, you need only look around on the large public squares in northern Tehran.

Clothes, even those of the men, are subject to constant scrutiny because they potentially question the system. They represent an individual's most personal outward attribute. Iranians mostly feel humiliated by the many rules and constant social control. Mothers with baby carriages are stopped and told that their coat is too short or their headscarf improper.

After the revolution, Iranian women sought to distance themselves from the Western image of women by wearing Islamic dress. But today they are making a statement against Islamic prescriptions for women that are still being held up three decades after the revolution. Dress is their form of protest.

Sometimes just looking fashionable is a statement in and of itself. Women are brazenly playing a game of testing the boundaries. One day it's a brightly colored headscarf pushed far back on the head, the next it's bright nail polish, then open sandals.

These small freedoms should not be over-interpreted. For Iranians, this is part of daily life. Many in the West understand these signs as the victory of the Western lifestyle. Not so, say Iranian women: "It's not about the superiority of the West. We are Iranians and we want to be free to choose our own path and how we dress," a woman tells us. "Freedom, you know?"

Laleh Seddigh knows. She fought hard for a fatwa that allows her and other women to participate in sports together with men. Previously women had been excluded from car racing on the grounds that they represented a security risk.

Today she is the unrivaled star of Iranian race car driving. She recently signed an advertising contract with the largest automobile manufacturer in Iran, Saipa. And soon she will be training the junior class of women drivers.

Laleh is vivacious and friendly, she laughs a lot. As she shows us a short film made by an Italian television crew, she is clearly amused. A funny and very telling scene demonstrates the reactions she often calls forth in public:

We see Laleh in the holy city of Mashad, in the middle of the desert in eastern Iran. She is standing in the foreground dressed in a tight-fitting light blue coat; behind her is a large sacred monument in honor of the Shiite Imam Reza. Pilgrims are streaming by her. Women in long black chadors stop in their tracks and stare at her with awe and suspicion.

While Laleh tells the camera that she enjoys playing the piano, painting and horseback riding, a man stumbles because he can't keep from staring at her. Laleh continues her monologue unperturbed.

Beauty and dynamism in Iran?

Then she shows us a film in which she takes over the camera herself. As she moves through the racing stable, drivers are standing around, it is raining, cars are being checked, we hear her laughing and cheerfully bombarding her colleagues with questions. Their reaction is as if they had just met up with their parents in a disco. Clearly the situation is uncomfortable for them, yet they remain polite.

We ask Laleh if she is aware that her lifestyle is unusual even by Western standards. She admits that in the United States people were astounded by her, too. "But this is my life, this is everyday life for me." Is she aware that Iran is never associated with beauty and dynamism, and that people think the veil is women's biggest problem?

She only laughs. "Women have it hard all over the world," she says, "perhaps here in Iran it's even harder." But because of this she believes Iranian women do not throw in their hands. They are braver than elsewhere; they take on the struggle, but in their own way, sometimes with Gucci and sometimes with a race car.

END_OF_DOCUMENT_TOKEN_TO_BE_REPLACED
Social media
and networks
Subscribe to our
newsletter