Scratching the Surface of the Myth

Lawrence of Arabia is often portrayed as the European genius who set out for the Middle East and made history in the process. A new exhibition in Germany is taking a closer look at the myth. Werner Bloch reports

​​ "Lawrence of Arabia" was one of the most successful films of its time. It was in 1962 that the Arabian epic, with Peter O'Toole in the leading role, first hit the screens. The film also starred such luminaries as Omar Sharif, Anthony Quinn and Alec Guiness, all among the best and most successful actors of their generation.

Lawrence of Arabia became an instant classic, no other film had ever made the fascination of the desert into something so visually stunning. It was the film that created the myth of Lawrence the hero, a man who in reality was more controversial, and even disdained. The real T.E. Lawrence, both personally shy and with delusions of grandeur, was a rather paradoxical figure who became immortal.

T.E. Lawrence was without a doubt one of the leading intellectuals of his day. Born in 1888 in Oxford, Lawrence was an orientalist, soldier, archaeologist and writer. Just like the pop stars of today he continually reinvented himself, creating his own myth.

Even the regal sounding title of "Lawrence of Arabia" was his own invention. Following his return from the First World War, Lawrence toured around Europe with a lavishly staged slideshow.

Later he wrote his memoirs, "The Seven Pillars of Wisdom: A Triumph". He remained, however, a problematic figure. "On the whole I prefer lies to truth, particularly where they concern me," he wrote.

How does one deal with a man with so little respect for historical veracity? It is a question now being posed in Oldenburg, Germany, where the first Lawrence exhibition on the Continent – "Genesis of a Myth" – can be seen until the end of March.

Knick-knacks instead of truth

Curator Detlef Hoffmann has no problem with Lawrence's problematic attitude to truth. "Retelling things in new ways was just one of the things he did. Lawrence's friend George Bernard Shaw was not alone in his belief that Lawrence's way of interpreting his experiences was poetic and akin to the way an actor or writer would do it. They didn't see him as lying at all. For them, it was all part of his creative inventiveness. That is how myths are created."

British secret agent during World War One: Lawrence supported the Arab Revolt against the Ottoman Empire, although he already knew of the secret agreement between France and Great Britain to divide the Middle East

​​ Perhaps. But it also sounds very naive. Can one really, seriously present Lawrence nowadays in just the way he did it himself and expect that we will relive his adventures in a kind of daring boys storybook sort of way?

Or is it not time to take a closer look at Lawrence the actor and conman and to re-examine his highly problematic role in European-Arab relations?

While curator Hoffmann takes pleasure in the mass of knick-knacks and curiosities that taking such a biographical approach to the exhibition involves, the committed and circumspect project director of the Lawrence exhibition, Syrian-born Mamoun Fansa, director of the Oldenburg Museum takes a very different view.

The exhibition should neither create a new myth nor revitalise the old one. "That is my objective. I want to have Lawrence as a kind of projection screen upon which to display the history of the Middle East," Fansa says.

It must have been quite a falling out that took place between Hoffmann and Fansa, and the tension between them was still clearly in evidence at the press conference.

The exhibition offers a biographical, devotional tribute to its subject. It is clear that curator Hoffmann has had his way, and what he has produced amounts to an uncritical, effusive hagiography.

It begins with what seems like an endless array of overblown comic strip illustrations which take up entire walls and roll out the story of Lawrence in exhaustive detail. Paintings, a few weapons, the chair from Lawrence's writing desk with its lambswool cover and a motorbike of the type that he was riding when he was killed in an accident in 1935. Nothing is explained and there is nothing here that tells us very much. 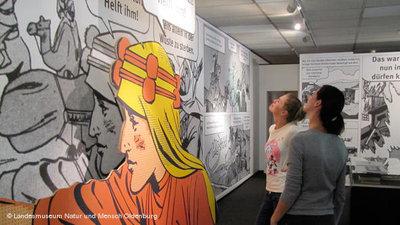 "The exhibition is a biographical, devotional, tribute to its subject. It is clear that curator Hoffmann has had his way, and what he has produced is an uncritical, effusive hagiography," says Werner Bloch

​​ No evidence to support the Lawrence "myth" is provided anywhere in this overly respectful exhibition. And this is unfortunate because there is so much that could have been told.

Even as Lawrence was inciting the Arabs to revolt, he was already well aware that Britain and France had long since divided up the Middle East according to the Syke-Picot agreement of 1916. The Arabs were exploited, and for them Lawrence was a spy and a traitor.

It is a view of Lawrence that Arab historians have researched and written on in recent years. But the visitor will search in vain for any trace of this in Oldenburg. It's a pity, because under the direction on Mamoun Fansa the museum has really been making a name for itself in recent years with excellent international exhibitions that have not been afraid to tackle the thorny issue of Orient-Occident relations.

Muhammad Asad
A Jewish Lawrence of Arabia
Born to a rabbi family in Habsburg Austria-Hungary, Muhammad Asad became an important twentieth-century Islamic thinker. Asad was a great traveller, a journalist, linguist, translator, social critic, reformist, diplomat, political scientist, and theologian. Today he is a landmark for a tolerant and contemporary interpretation of the faith. A portrait by Lewis Gropp

Global World War Research and the Middle East
"World History Is Historiography against the Grain"
The role of the Middle East and its inhabitants in the two world wars has barely been studied to this day. The Berlin 'Zentrum Moderner Orient' has been attempting to fill these gaps in historical research since 1995. By Sonja Hegasy

Tom Reiss: On the Trail of Essad Bey
The Transformation Artist
Essad Bey was a German-speaking writer of Jewish-Russian origin, who converted to Islam in 1922 and later passed himself off as a Muslim prince in Nazi Germany. With "The Orientalist," Tom Reiss offers readers a fantastic biography. Sonja Hegasy introduces the book

END_OF_DOCUMENT_TOKEN_TO_BE_REPLACED
Social media
and networks
Subscribe to our
newsletter