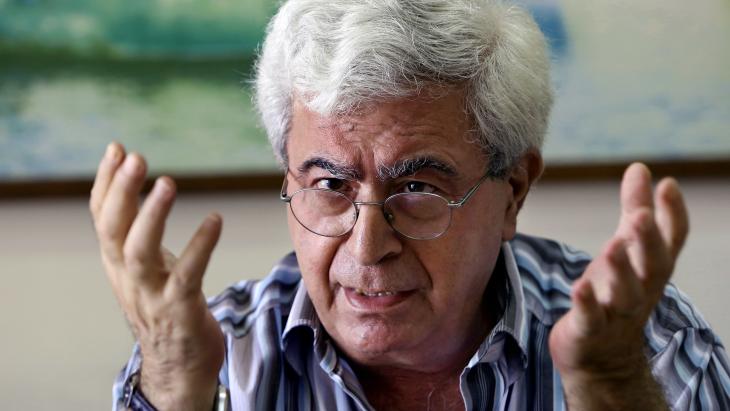 Beirut's ruling class – "The stupidest mafia there is"

Fifty percent of Lebanese already live below the poverty line – and there is no end in sight. In interview with Lena Bopp, writer Elias Khoury talks about the crisis and about the state of culture in his home country

Lebanon is experiencing the worst economic crisis in its recent history. Inflation and unemployment are rising, the shops are empty and there are constant power cuts. Do you expect a new wave of migration?

Elias Khoury: It has already started, which is hardly surprising. But one thing I find fascinating is that the whole oligarchic ruling caste is still clinging to power, even they must know there is nothing more to be had. These people have taken all the money out of the country, but they themselves are not emigrating. Though, honestly, it would be best for them to leave now.

Khoury: The entire ruling class. Everyone knows they have the money. But they're not leaving because they would be nobody outside of Lebanon. Because they need power to show they're important, despite that fact that everybody knows they are crooks. Of course, you can be a crook and still possess a modicum of intelligence. But these people are stupid, the stupidest mafia there is.

The people who are leaving are middle class...

Khoury: Yes, they are the first wave, but I think if the situation continues to deteriorate as quickly as it is at the moment, then we will become like the Syrians. The poverty here is terrible. Fifty percent of Lebanese already live below the poverty line. That's no secret. And there's no end in sight.

Lebanon has experienced several waves of emigration in its history. How does the coming one differ from the past?

Khoury: The biggest wave was after the famine during the First World War. At that time it was comparatively easy to emigrate because not only the United States, but Brazil and Argentina also welcomed immigrants.

The second big wave did not start at the beginning of the civil war, as is often assumed, but in the middle of it, during the so-called war between the supporters of Michel Aoun, the current president, and the Lebanese Forces in the east of Beirut. That was in 1989, when mainly Christians emigrated to Europe and Canada.

But the wave that is now beginning has little in common with the earlier ones, because I don't believe that any country will welcome those who flee. Therefore, the Lebanese wave will be similar to the Syrian wave. When the poor, who have no hope of getting a visa, really begin to emigrate we will see boats and traffickers. It won't just be Christians. 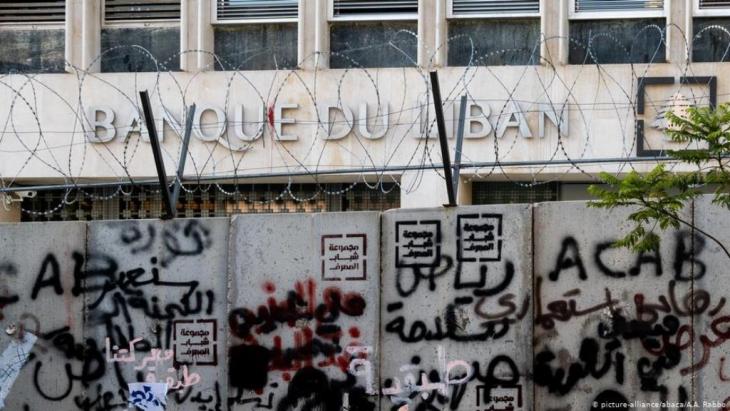 Lebanon threatens to become a "failed state" if the government does not implement the reforms demanded by the International Monetary Fund (IMF), Lebanese Foreign Minister Nassif warned. The country is one of the most heavily indebted states in the world. In June, two members of the Lebanese IMF negotiating team resigned due to the government's lack of will to implement reforms. Yesterday, Nassif Hitti also resigned

Many people say that Lebanon's situation is new because it is the first time that the dollars that continued flowing into the country even during the civil war are no longer available. Lebanon is in crisis not only owing to decades of corrupt government, but also because it has lived beyond its means for years thanks to fiscal tricks by Lebanon's central bank.

Khoury: These two things are connected. The corrupt government and the banks have been working together the whole time.

But ultimately, what this partnership enabled Lebanon to do was maintain a standard of living far above what would otherwise have been possible for decades. One side effect, if you like, was the emergence of a middle class ...

Khoury:... which already existed before. And which merely got the scraps, as a means of keeping the peace.

The question remains, why didn't this class fight back earlier?

Khoury: It did, the protests started as early as 2013 and continued two years later with the refuse crisis, when rubbish piled up all over the country and people took to the streets. The protests during the refuse crisis were led by the middle classes, who were aware of the structural problems in the country. But the movement stopped when Amal's Shia militia turned up with their knives. I was there, I saw it. The demonstrators considered their reaction carefully. They knew that if they armed themselves with knives, they would be met with Kalashnikovs.

Lebanon's middle class has never had any allies among the ruling class – not one! And that has always been its problem. But if you want change, you need a combination of a popular movement and at least elements of the political class. When protests broke out again last autumn, the young people discussed what to do. They considered approaching Hezbollah – popular among the poor and therefore most likely to help, they thought. But they soon discovered that Hezbollah is the system's staunchest supporter. Hezbollah needs the status quo to act as a shield in its regional conflicts. It is not a Lebanese project at all. So we are not dealing with a government, but with a mafia. Unless you understand that, you won't understand what's happening right now. This is the price we paid to end the civil war.

Khoury: The peace was based on a coalition between the old militias and the financiers with their big money. That is how Lebanon came into being. It was a diabolical alliance. Today it is a structural problem.

How will this affect the country's cultural life? If impoverishment continues at this rate, there soon won't be much left of it.

Khoury: There is the publishing industry, which will survive with great difficulty. Then there are the performing arts, which have reached an impasse – because of the crisis in Lebanon, but also because many of them receive support from abroad, which is likely to dwindle away. The film industry, for example, was big. Every year, four or five noteworthy films came from Lebanon, invited to international festivals, but they were all co-financed by ARTE or others. There will be much less of that now. And that will change everything.

There were also many cultural events that received support from the Lebanese banks without asking where the money actually came from.

Khoury: All the showcase events will cease: the tourist events, music in Beiteddine or in Baalbek – gone. Certain aspects of the scene were a bubble, and it will burst. But does that mean culture is dying? Of course not. So how do you go on? I remember when we founded the theatre in 1992 after the war. We were all volunteers. It was all very modest, and I think that's what we will have to return to. Unless the situation escalates and there is a military conflict, a coup d'etat, which is possible. Then we'll end up like our Arab brothers. 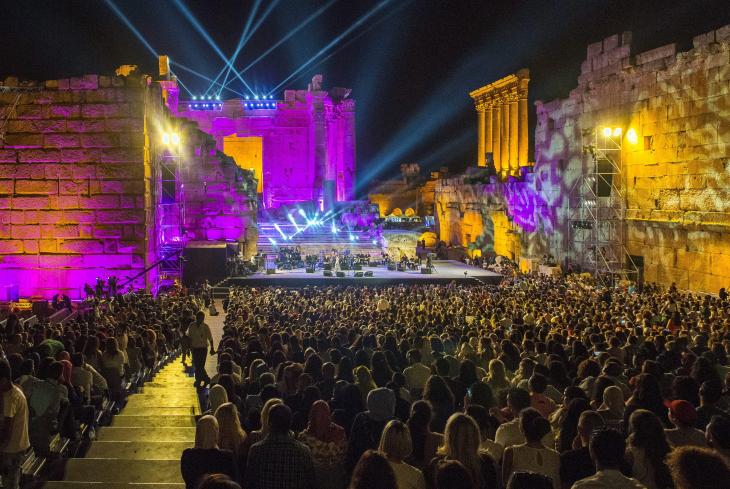 Elias Khoury on the crisis and culture in his home country: "All the showcase events will cease: the tourist events, music in Beiteddine or in Baalbek – gone. Certain aspects of the scene were a bubble, and it will burst. But does that mean culture is dying? Of course not"

Could Beirut face a similar fate to Baghdad, which lost its middle class in the 1950s and 1960s – and with it its cultural avant-garde? The city has never recovered.

Khoury: I don't think the Iraqi model can be compared to ours, because Baghdad has always been a homogeneous Iraqi city. But Beirut is not Lebanese, it is Arab. Beirut has always been the centre of Arab culture. Everyone came here: artists, directors, writers. It wasn't like that in Baghdad. Only Cairo in the early twentieth century was similar, but that was a different era.

What gives me a spark of hope is that the Islamist movements have never engaged with culture and never produced any either – neither in Lebanon nor in the rest of the Arab world. They have religion, their ideology, but no culture. They cannot kill culture because they have none. But every society needs culture, because it is like a mirror. No one can live without a mirror.

In Lebanese literature, writers have hardly dealt with emigration, which is surprising when you see how many of them have emigrated ...

Khoury: The writers of the first emigration wave left the country, but they wanted to come back. Khalil Gibran, Elia Abu Madi, Ameen Rihani – they all played a major role in Arab modernity, and they were all immigrants in the United States or Egypt. But they shared more about the Levant they had left behind than the circumstances in which they now found themselves. The same applied to the writers of the second wave: Amin Maalouf never spoke about the experience of exile.

Do you yourself possess two passports?

Khoury: Never. I worked at the university in New York for a long time, but I never took a full-time job because I wanted to go back. And now at my age, let them kill me! (laughs) Exile is not a choice. We intellectuals only go when we have to.

Lebanese author Elias Khoury was born in 1948. His most recent, highly praised novel "The children of the ghetto: My name is Adam" has been translated into English and French.

They’ve already got the Louvre; they’ll soon have a Guggenheim Museum as well – and now the Emirates have added literature to their quest for cultural supremacy in the Arab world ... END_OF_DOCUMENT_TOKEN_TO_BE_REPLACED

The rollout of coronavirus vaccines in the Middle East and North Africa is already taking place on a massive scale, with the United Arab Emirates leading the way. Nevertheless, ... END_OF_DOCUMENT_TOKEN_TO_BE_REPLACED

A childhood and youth in Beirut, a life lived between Lebanon, Switzerland and Germany, and a unique voice in Arabic-language literature: "Beirut für wilde Mädchen" sees Lebanese ... END_OF_DOCUMENT_TOKEN_TO_BE_REPLACED

Surging coronavirus cases in many parts of the world have overshadowed the start of this year's Muslim holy month of Ramadan, with festivities once again curtailed by contagion ... END_OF_DOCUMENT_TOKEN_TO_BE_REPLACED

German Middle East analyst Guido Steinberg and television journalist Ulrich Tilgner have both published new books on the conflicts in the Middle East. Their analyses and their ... END_OF_DOCUMENT_TOKEN_TO_BE_REPLACED
Author:
Lena Bopp
Date:
Mail:
Send via mail

END_OF_DOCUMENT_TOKEN_TO_BE_REPLACED
Social media
and networks
Subscribe to our
newsletter