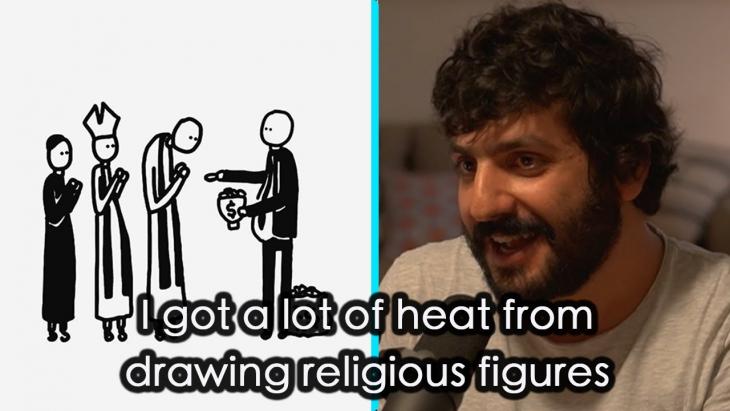 Lebanese cartoonist Bernard Hage has made a name for himself in a very short space of time, both at home and abroad. Now he sees no future for himself in Lebanon, and is about to make the move to Berlin. By Lena Bopp

Lebanon is a good country for cartoonists. Too good, perhaps. Bernard Hage, who has been dissecting its political and social life for almost three years now, with drawings published every Saturday in the daily paper L’Orient – Le Jour, is feeling under pressure. We speak one afternoon in a hipster cafe near the port, surrounded by the noise of building sites, where he tells me that his skill as a cartoonist is coming up with surreal and absurd scenarios to skewer real events.

But in a country where absurdity is a part of everyday life, that becomes difficult. One such moment occurred recently, when it became known that the country’s prime minister – who has stepped down but is still the acting premier – applied for a job in Qatar with a 130-page CV (which he denied, calling the story "ridiculous"). "That’s better than any cartoon!" Hage cries. "Sometimes it feels like a competition, as if I have to tell them: people, it’s my job to make these jokes, not yours."

Bernard Hage has made a name for himself in a very short space of time. A good three hundred people came to the recent launch of his new book, a collection of cartoons from the past few years, some equipped with footnotes so that people outside Lebanon could understand them. He also received congratulatory messages from Paris, from the head office of the "Institut du Monde Arabe", of all places. "I’ve never got that level of recognition from cultural institutions in my own country," he says. And yet his unmistakable, minimalist, blackly humorous cartoons, for which the French-language paper sometimes reserves whole pages and gives him a free hand, have made him the foremost chronicler of a time that has been truly devastating for Lebanon.

The timeline of disintegration

His book documents this decline, from the economic crisis and inflation, via the pandemic, to the explosion in the port of Beirut. Bernard Hage has left out none of the events that have taken away many Lebanese people’s standard of living – and often their hope, too – in the space of less than two years. In one cartoon, he relegates the "middle classes" to a display case in the "Museum of Extinct Species". In another, Lebanon is a sick man lying in bed, as the doctor gives his diagnosis: "I’m afraid you have Hezbollah."

Hage’s humour has grown darker over time. One of just a few non-sarcastic cartoons comes from the early days of the protests that brought the whole population, regardless of religious affiliation, out onto the streets in the autumn of 2019 – at least for a few weeks. At that time, he put forward a "Thaoura Vision 2030" (thaoura meaning revolution), with "things we would like to see in the near future". It was composed of small scenes showing a mother asking her child if he’d like to go and feed the ducks in the park; a policeman stopping a pedestrian with a dog from walking on the cycle path; a voice announcing the next stop on the metro. But those days when parks, metros and cycle paths didn’t sound utopian were quickly over. 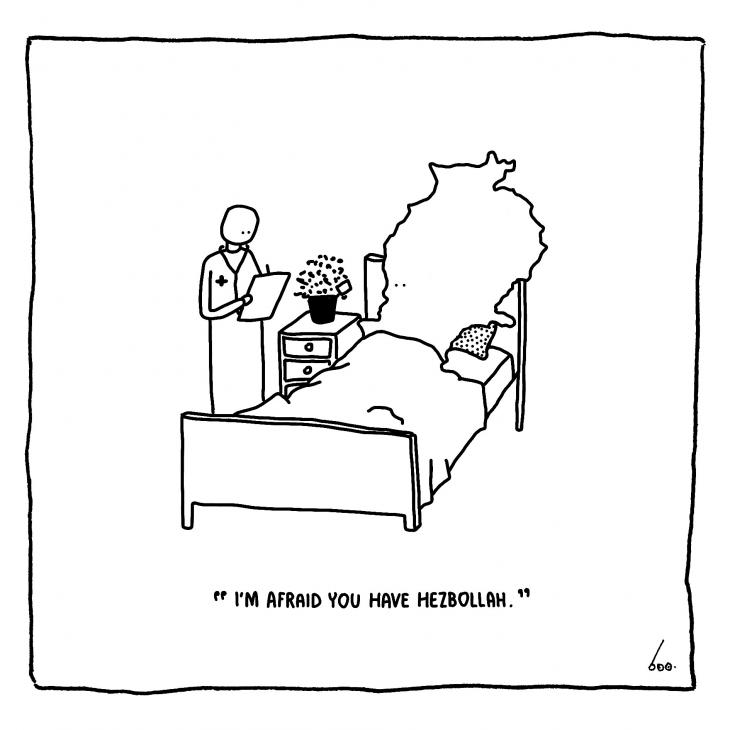 Lebanon is a sick man lying in bed, as the doctor gives his diagnosis – "I’m afraid you have Hezbollah": Bernhard Hage's acerbic cartoons document Lebanon's decline, from the economic crisis and inflation, via the pandemic, to the explosion in the port of Beirut. But in a country where absurdity has become part of everyday life, satire can feel impossible. "Sometimes it feels like a competition, as if I have to tell them: people, it’s my job to make these jokes, not yours"

As a Lebanese person, Hage jokes, you spend most of your life planning your emigration anyway. The recent cluster of crises has just accelerated his own planning. In a few weeks’ time, he is planning to set off for Berlin, where a few of his drawings are being exhibited under his pen name "The Art of Boo", alongside the work of the artist Paola Yacoub at the DAAD gallery. He has already learned German. "But I’m not going now to discover another culture – I’m fleeing. I’m setting off in a less dignified way than I wanted to."

Three of his closest friends have already left the country, all following the explosion, which also changed Hage’s own relationship with the city: "I barely recognise Beirut now, it’s like the city is in limbo." Gouraud Street, where he spent his youth, runs through the part of town that was worst hit. "My memory is attached to specific places, to a certain cafe, a certain house. Seeing it all destroyed is like someone breaking into my personal life and saying: this is nothing."

Bernard Hage grew up in a middle-class Christian family, studied graphic design and went to work for an advertising agency where he honed his talent for captions and sharpened his drawings. The style of his cartoons is markedly different from that of the country’s earlier great cartoonists, such as Pierre Sadek and Mahmoud Kahil (after whom the Mahmoud Kahil Award is named, an annual prize for the best comics and cartoons in the Arabic-speaking world).

For decades, they commented on events by drawing politicians as recognisable characters, which was always possible in comparatively liberal Lebanon. Things were different in Egypt, for example, where from the 1950s and the reign of Nasser at the latest, cartoonists could only express general opinions on corruption, poverty or abuses of power, and were unable to portray individual politicians without putting themselves in danger. Or in Syria, where Ali Ferzli, the first person who dared to caricature the eternal dictator Assad after revolution broke out in 2011, had both hands broken by the dictator’s henchmen. Or in Jordan, where just last September Emad Hajjaj spent a few days in prison after portraying the Crown Prince of Abu Dhabi in a cartoon that sneered at the rapprochement between his Emirate and Israel.

Bernard Hage’s characters aren’t individualised. In fact, they are more reminiscent of stick figures, only distinguishable from one another by their stature and clothing. The politicians wear suits stretched tight over round bellies. The ordinary citizens are tall, thin and frequently hang their heads. What they all have in common is the perplexed look on their faces; Hage’s figures have eyes, but no noses or mouths. "They can’t speak, they can only observe what’s happening. That came out of a sense of helplessness. The situation in Lebanon has been forced on us, and we can’t say anything that would change it." 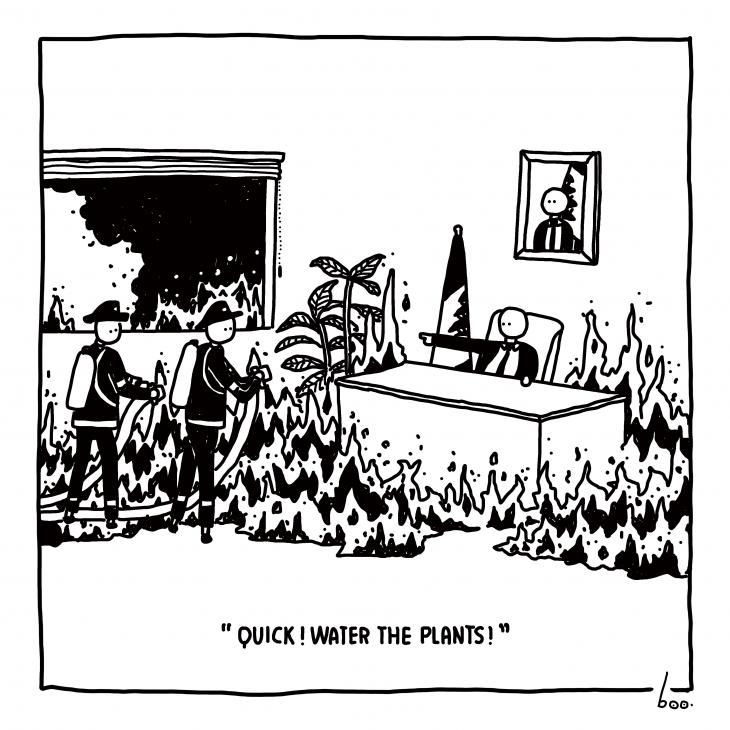 Lebanon burns while those in power merely seek to secure their sinecures: with his distinctive style, the Lebanese cartoonist for the French-language newspaper L'Orient - Le Jour has made a name for himself beyond Lebanon. His figures "aren’t individualised. In fact, they are more reminiscent of stick figures, only distinguishable from one another by their stature and clothing," writes Lena Bopp. "The politicians wear suits stretched tight over round bellies. The ordinary citizens are tall, thin and frequently hang their heads. What they all have in common is the perplexed look on their faces; Hage’s figures have eyes, but no noses or mouths"

Nor is it a contradiction that the same applies to politicians; for a long time now, they too have seemed like prisoners of the techniques that have been used to rule the country for decades, which rely on clientelism, corruption and a phenomenon known as  "wasta" – a network of connections that everyone needs in order to get anything done. To find a job, get a building permit, obtain an acquittal. Anything at all, in other words.

"Wasta" is also the name of a card game that Bernard Hage drew for the game developer Elie Kesrouwany, who runs a café for keen boardgame players on the outskirts of Beirut. The five hundred copies of the Arabic version sold out within two weeks, and demand was so great that Kesrouwany also designed an English translation of the game. The aim of "Wasta" is to bribe other players with cards of different values. Every possible facet of Lebanese life plays a role: neighbours, police officers, foreign powers, banks and thugs. The player who goes first is the one who in real life was the last to succeed in withdrawing dollars from their own bank account – a sarcastic joke, since customers have to make huge efforts before hard-hit banks will grant them access to their own dollars – if they do at all.

Lebanese humour, as Bernard Hage likes to say, is darker than a politician’s pocket. He himself discovered it when he was out and about in his home district of Gemmayze in around 2008, after the Syrians had withdrawn, when Beirut was regularly shaken by bombings. People had got into the habit of leaving notes with their phone numbers on in their cars, so that they could be contacted if someone thought a vehicle looked suspicious. Hage has a clear recollection of a white Seat. "Dear suicide bomber," said a note on the windscreen, "if you want to kill yourself, please don’t do it next to my car. I have only just bought it and am still paying off the instalments."

A key moment. "But black humour is a double-edged sword," says Hage. For a second it makes things that are difficult to change more bearable. At the same time, it costs sympathies that could possibly be used to seize any tiny remaining opportunity for change. But Bernard Hage no longer sees any such opportunities for himself in Lebanon. "I want a boring, European life," he says – with a laugh, of course. It’s quite possible his sense of humour will be well suited to it.

Works by Bernhard Hage and further information at: www.theartofboo.com

Home
Print
Newsletter
More on this topic
One year after the Beirut port blast: Young activists fight for a new LebanonBeirut in crisis: Can things get any worse for the people of Lebanon?Book review: Riad Sattouf’s graphic novel "The Arab of the Future": Between worlds Lebanese comic artist Rawand Issa and "Not from Mars": Being illegal is unbearable
Related Topics
Arab comics, Arab world, Arabic language, Art, Cartoons, Comics, Confessionalism, Gamal Abdel Nasser | Nasserism, Hezbollah, Performing arts, Satire
All Topics

Moncef Marzouki was Tunisia's first democratically elected president after the fall of dictator Ben Ali. Today he is the most prominent critic of increasingly counter- ... END_OF_DOCUMENT_TOKEN_TO_BE_REPLACED

Asef Bayat, professor of Sociology at the University of Illinois, Urbana-Champaign, has been studying revolutions and how they affect people since 1979. In his recent book, " ... END_OF_DOCUMENT_TOKEN_TO_BE_REPLACED

The 2020 Beirut port blast was a traumatic experience for many people in Lebanon. A large number sought therapy in the aftermath. But, with doctors leaving the country, help is ... END_OF_DOCUMENT_TOKEN_TO_BE_REPLACED

A pandemic, civil strife and an economic meltdown have conspired to bring Beirut's vibrant club scene to its knees. Yet the city needs parties more than ever. Kate Martyr reports END_OF_DOCUMENT_TOKEN_TO_BE_REPLACED

A group of 20 social media influencers in Lebanon is seeking to de-escalate political tensions and overcome sectarian problems. Their outreach is impressive among the young and ... END_OF_DOCUMENT_TOKEN_TO_BE_REPLACED

END_OF_DOCUMENT_TOKEN_TO_BE_REPLACED
Social media
and networks
Subscribe to our
newsletter