The Lebanese author Iman Humaidan-Junis has written a novel set in her country's civil war years. Her figures' stories, and thus the novel's atmosphere, are characterized by their disturbing and terrible ability to adjust to the reality of war. Angela Schader read the novel 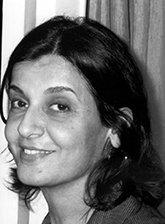 ​​A few more bullet holes in Beirut's facades, a few more deaths, a few more fire-blackened walls; after the most recent nightmare has died down, a return to a paralysing, tense state of relative calm – but for how long? The new scars will soon form in the face of the Lebanese capital, which today still holds traces of a decade and a half of civil war.

"The war might be finished, but my history is far from over." So ends Iman Humaidan-Junis' novel B as in Beirut,which revisits the tragic years between 1975 and 1990 from the perspective of four women, not as a tidy, convenient, retrospective history lesson, beginning instead directly with the women's violently disrupted living conditions. The action takes place in a tenement block where the characters all meet, forming a concave mirror to Lebanese society.

Lilian is a Christian, married to a southern Shiite, whose family are driven from their village in the war and claim their right to hospitality in her tiny Beirut flat with force. The psychologically delicate Warda, forced into a rushed marriage with a much older man, floats, unkempt round her room, living off coffee and cigarettes and mourning the loss of her daughter who her husband placed in others' care.

Lebanon, a nation bent on self-destruction: buildings in a Beirut street, destroyed from the civil war that lasted from 1975-1990

​​Maha, whose partner was killed in the civil war, runs the gauntlet of the leery, loitering militiamen on the streets, occasionally travelling to the village where she was born, steeped in the shame of war with empty houses from which the Christians, once neighbours and friends, have fled.

Kamilja, who like Maha comes from a Druze family, was dumped with her aunt and grandmother at an early age so that her parents could remain abroad to accumulate money in peace. As a young woman she now drifts between partners and political parties, fascinating everyone who meets her with her enchanting, outrageous self-confidence, which ultimately serves only to keep her deeper lack of orientation in check.

Written on the run

The novel was created from text fragments which Iman Humaidan-Junis wrote during the civil war, in constantly changing places of refuge, in other people's flats, in her village, at the steering wheel waiting at checkpoints. This experience of the fruitless search for safety is also written into the book:

"Each time they move into a new flat, they think the same thing. They arrange their personal effects, which become ever fewer because they gradually become millstones round their necks so that each time they move they shed a few more things. Once established in a new place, they soon forget the terrible things going on outside, and when the first pane of glass shatters, they are surprised again."

​​This disturbing, terrible ability to adapt to the reality of war characterizes the figures' narratives and thus the novel's atmosphere. The violence, largely restricted to the masculine domain, affects the protagonists only indirectly. Kamilja's first lover, a Christian, is found murdered in the mountains; the man she finally hopes to settle with, years later, is dispatched by a jealous rival in the brutal manner of civil war.

In her crowded flat, where intimacy is no longer possible, Lilian struggles with her physically damaged and psychically broken husband. Warda, herself spared from death because her father's body shielded her from a granite splinter, is forever plagued by demons, who never make it clear whose guilt they represent.

The delicate poetry of the Warda passages demonstrates the sensitivity with which the author is able to evoke and give form to the horror which forces its way into daily life, spreading intangibly. Things which might seem extreme and dramatic in an outline of the plot, are developed with control and without awkwardness. Lebanon's darkest period is unfolded with a wealth of nuance showing both the garishly unreal and the all too horrifically real experiences of a nation bent on self-destruction.

This review was originally published in the Neue Zürcher Zeitung and refers to the German translation of Iman Humaidan-Junis' novel, originally written in Arabic. The English title is B as in Beirut, translated by Max Weiss (Interlink Pub Group Inc, November 2007).

Article translated from the German by Steph Morris

Raschid al-Daif
Writing to Combat Memory Loss
Despite his literary transformation, the Lebanese writer Rashid al-Daif can still see the horrors of his country's civil war clearly in his mind's eye. Katja Brinkmann reports on the life and work of this author

END_OF_DOCUMENT_TOKEN_TO_BE_REPLACED
Social media
and networks
Subscribe to our
newsletter