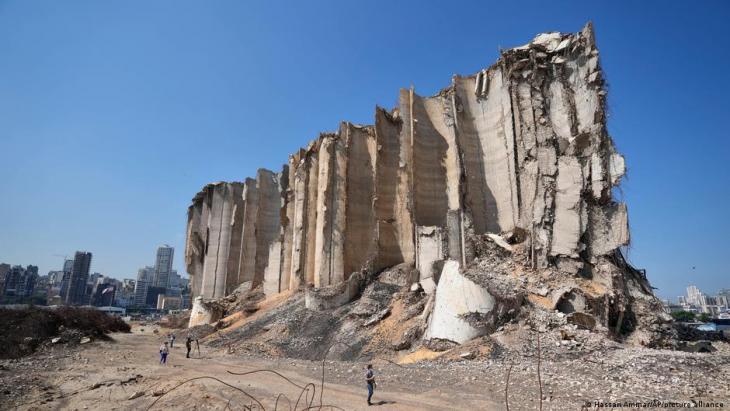 The watchdog recommended an independent UN investigative mission conduct its own inquiry, and advocated for broad international sanctions against top officials.

The explosion on 4 August 2020 of a shipment of ammonium nitrate fertiliser haphazardly stored at the Beirut port for six years killed more than 200 people and destroyed swathes of the capital, in one of the world's largest non-nuclear blasts.

Victims' families and the broader public widely saw the explosion as the result of incompetence and corruption on the part of the ruling class, but one year on, no official has been brought to justice.

A 126-page HRW report, released one day before the first anniversary of the tragedy, identified top officials in the government, customs, the army and security agencies who were aware of the shipment and its dangers but failed to take necessary action.

"Multiple Lebanese authorities were, at a minimum, criminally negligent under Lebanese law in their handling" of the ammonium nitrate shipment, said the report, which draws on interviews and official correspondence, including previously unpublished material.

"Evidence strongly suggests that some government officials foresaw the death that the ammonium nitrate's presence in the port could result in and tacitly accepted the risk of the deaths occurring," it said.

The report, entitled "They Killed us from the Inside: An investigation into the August 4 Beirut blast", accused authorities of violating the right to life and said that their actions could amount to "homicide" under domestic law.

The rights group recommended sanctions against "officials implicated in ongoing violations of human rights related to the August 4 blast and efforts to undermine accountability".

Sanctions, HRW said, would "provide additional leverage to those pressing for accountability through domestic judicial proceedings".

According to the HRW investigation, mistakes started soon after the chemicals arrived in Beirut in 2013 onboard the Rhosus, a Moldovan-flagged ship allegedly sailing from Georgia to Mozambique.

"Ministry of Public Works and Transport officials inaccurately described the cargo's risks in their requests to the judiciary to offload the merchandise," HRW said.

They also "knowingly stored the ammonium nitrate in Beirut's port alongside flammable or explosive materials for nearly six years", even after receiving reports warning that the chemical is "extremely hazardous", HRW said.

For their part, customs officials who were first alerted to the hazardous chemicals in 2014 and who could have acted unilaterally to remove the material from the port failed to take adequate steps to dispose of it, HRW said.

The Lebanese army, even after learning that the shipment's nitrogen grade classified it under local law as material used to manufacture explosives, "took no apparent steps to secure the material", the report said.

Instead, it brushed off responsibility, saying it was not in need of the chemicals, even though under Lebanese law, army approval is required to import or inspect material used to manufacture explosives.

Lebanon's State Security agency, which completed an investigation into the ammonium nitrate at the port before the explosion, was slow to report the threat to senior government officials and provided incomplete information about the dangers the chemical posed, HRW said.

"I then forgot about it, and nobody followed up. There are disasters every day," he told HRW.

Diab, along with the president, then received a State Security report at the end of July last year, but both failed to take action.

HRW said that the domestic investigation had been rendered "incapable of credibly delivering justice" and called for an investigation mission mandated by the UN Human Rights Council.

That mission should "identify what triggered the explosion and whether there were failures in the obligation to protect the right to life", it said. (AFP)

More on this topic
Lebanon after the explosion: Beirut's aftermath – shattering as 15 years of civil warOne month after the Beirut port explosion: "We sweep trauma under the carpet and carry on"Lebanese protesters call for systemic change: What now for Beirut, once the Paris of the Middle East?Interview with Lebanese author Elias Khoury: Beirut's ruling class – "The stupidest mafia there is"
Home
Print
Newsletter
MoreAll Topics

END_OF_DOCUMENT_TOKEN_TO_BE_REPLACED
Social media
and networks
Subscribe to our
newsletter