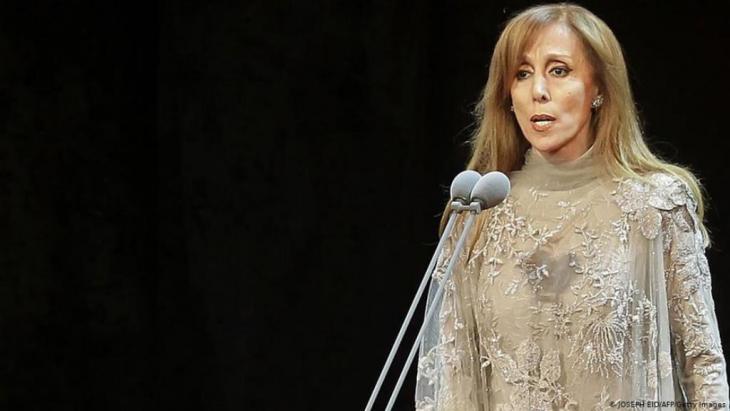 Revered as "Mother of the Lebanese Nation" and "Harp of the Orient", Fairuz is a legend all over the Arab World. Now she is celebrating her 85th birthday. By Suzanne Cords

She hasn't been on stage for a few years now, her most recent album was released in 2017 — yet Fairuz is omnipresent. Whether in Beirut, Baghdad, Dubai or Rabat, when you turn on the radio in the morning, you are sure to hear her familiar voice.

The Lebanese singer's songs have been part of the daily repertoire of Arabic-language radio stations for decades, as it behoves an icon. And she is very much an icon, reveals Moroccan music ethnologist Mohcine Ait Ramdan. "Fairuz is one of the cornerstones of Arab music and culture in general," said Ramdan. "She is still a key figure for the younger generation, too. You can tell by the fact that time and again, her songs are interpreted in talent shows like Voice Arab."

Her catchy, melancholic songs about love, longing, peace and solidarity with the native country have endeared Fairuz to millions of Arabs over the decades. Even today, her albums are among the best-selling in the Arab world.

At age 78, Fairuz was officially named an Ambassador of Arab Culture, having long since been unofficially revered as "Harp of the Orient" and "Mother of the Lebanese Nation".

She is so famous that even French President Emanuel Macron paid her a visit at her home in the Beirut suburb of Rabieh while on a state visit to Lebanon a month after the devastating explosion in Beirut in August 2020. Macron awarded her the Legion of Honour, France's highest order of merit for military and civil achievements, once established by Napoleon Bonaparte – and he stayed for dinner.

"Fairuz gives us hope," he said afterwards. He described her as "very beautiful, very strong" and called her a symbol of a country that knows pain and glory. The reclusive singer shared the meeting with her fans on Twitter.

Fairuz was born Nouhad Haddad on 21 November 1935, although according to some sources the date may have been 20 November 1934. The woman with the powerful onstage voice is a very private person and has never clarified the exact date.

She and her three siblings grew up in the historic centre of Beirut. In the summer she would visit her grandmother in a small village in the mountains. Those childhood experiences later enabled her to credibly speak to both rural Lebanon and the big-city elite.

As a teenager in the late 1940s, she sang in a choir on the radio. The song Itab made her famous overnight in 1952, but it wasn't until 1957 that she first appeared live on stage, at the Baalbeck International Festival – and was promptly awarded the prestigious Cavalier Artist Prize by Lebanese President Camille Chamoun.

That was the day that Fairuz, whose stage name means "turquoise" in Arabic, skyrocketed to fame as an iconic Arabic singer. And it wasn't just her unique voice, as Tunisian musicologist and singer Dorsaf Hamdani once told German public radio broadcaster Deutschlandfunk. "Fairuz led a revolution, one that changed the aesthetic code of music, the people around her — Fairuz changed Arab culture."

"Song is the secret to all existence"

Fairouz married Assi Rahbani in 1954. He and his brother Mansour established a new style of music in 1960s Lebanon, a country that was relatively stable politically and economically after the demise of the Ottoman Empire and the dissolution of the French mandate. That musical style contributed significantly to the identity of the young state.

The brothers composed folk music, but in a classicistic manner, setting poems by famous philosophers like Khalil Gibran to music in a country where folk song and classical Arabic music were once separate genres. When Fairuz delivered the line "singing is the secret to all existence", she touched the very hearts of her audiences.

The fact that she was never active in politics in any way also explains the secret of her success throughout the Arab World for decades, Mohcine Ait Ramdan said – even during the Lebanese Civil War from 1975 until 1990.

"There is no room for violence in her songs. She sings for peace, for light-heartedness," added Ramadan, emphasising that there is no trace of politics or religious messages in Fairuz' music.

In Syria, her songs are played on the radio, which is controlled by the Assad government, as well as on media held by the opposition. She was not resented for the release of a song honouring Jerusalem, Ramdan said.

Nor has the fact that she is a Christian ever been an issue in the Muslim World. "Most people probably don't even know."

Fairuz conquered the stages of the world in Cairo, Rabat and Amman as well as New York, London, Paris and Athens. She is said to have recorded more than 1,500 songs, released more than 80 albums and starred in at least 20 musicals.

At the beginning of this decade she re-invented herself and released the jazzy album "Eh Fi Amal" in collaboration with her son, the composer Ziad Rahbani. In "Bebalee" of 2017, she covered songs by French chansonnier Gilbert Becaud and sang an Arabic version of John Lennon's hit song "Imagine."

"These last albums were very contemporary. In particular, musicians from an older era usually don't manage to move on like that," Ramdan observed. This has earned her much respect among the younger generation, while older people sometimes don't know what to make of it. "Fairuz is a great singer," wrote Abdo Wazen, head of the feature section of the pan-Arabic Al Hayat newspaper. "But I think some fans wonder whether it was really necessary for Fairuz to sing something new in her last years."

Not needing to worry about criticism, Fairuz can rest assured of her status as a musical icon and legend. Today, on her 85th birthday, celebrations throughout the country might be more muted than usual due to coronavirus pandemic restrictions, but the Lebanese are sure to wish their Mother of the Nation "Tahanina" — Congratulations! – as do we.

November 2022 sees the Arab world firmly in the spotlight with the COP27 in Egypt and the FIFA World Cup in Qatar. Public trust in MENA governments is weak, thanks to their ... END_OF_DOCUMENT_TOKEN_TO_BE_REPLACED

"You are not my guide... I am the compass. Iranian women have spoken, freed themselves, and unleashed a revolution despite smelling death. They have cut their braids in anger; ... END_OF_DOCUMENT_TOKEN_TO_BE_REPLACED

In “The Wrong End of the Telescope”, Rabih Alameddine draws us away from the headlines and into the personal story of one individual. Mina is complex, compelling and very real. By ... END_OF_DOCUMENT_TOKEN_TO_BE_REPLACED

How are comic book artists in the Arab world responding to the political situation in the region? Lena Bopp talks to illustrators Lina Ghaibeh and George Khoudry about young ... END_OF_DOCUMENT_TOKEN_TO_BE_REPLACED

The clashes in Baghdad between supporters of Muqtada al-Sadr and pro-Iranian militias show that an intra-Shia power struggle is in full swing. An analysis from Cairo by Karim El- ... END_OF_DOCUMENT_TOKEN_TO_BE_REPLACED
Author:
Suzanne Cords
Date:
Mail:
Send via mail

END_OF_DOCUMENT_TOKEN_TO_BE_REPLACED
Social media
and networks
Subscribe to our
newsletter