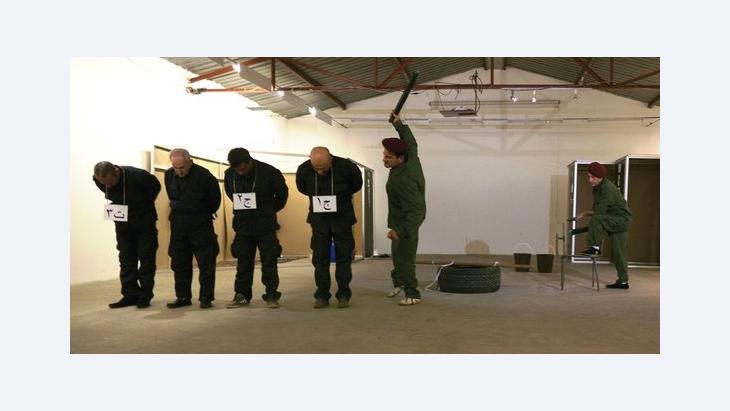 They were abducted and tortured. Now they have taken to the stage: In "The German Chair", Lebanese survivors of Syrian jails recreate the horrors of the civil war in a play. By Jannis Hagmann

Think of Palmyra and usually, images of golden shimmering pillars spring to mind, of dilapidated temples and the magnificent, desert-bound central boulevard of the ancient oasis city. But Palmyra also has a dark side: The city in eastern Syria is home to one of the nation's most feared prisons – primarily notorious for the terrible torture meted out to inmates.

Raymond Bouban knows about torture. He was abducted by the Syrians in the 1980s, during the Lebanese civil war. He spent 14 years in Syrian prisons – in Palmyra, and later in Saidnaya to the north of Damascus. Now, the 49-year-old bald-headed, moustachioed man sits in a theatre in the Berlin district of Kreuzberg and gets ready for the show. "Der deutsche Stuhl" (The German Chair) is the name the eight Lebanese men have given to their play, which they are performing for the first time outside Lebanon in Berlin, Stuttgart and Hamburg.

Bouban says that they have all sat on the German Chair, he himself a total of 19 times. The instrument of torture, which is called the kursi almani in Arabic, is a chair-like structure upon which the detainee is placed. It consists of movable parts which overstretch, and often break the spine of the person being tortured. 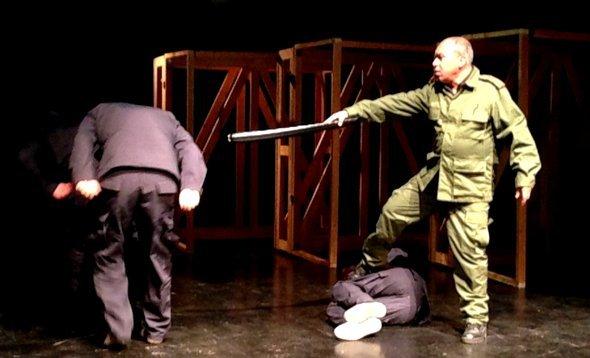 Terrifyingly authentic: The live performance "Der deutsche Stuhl" is a hard-hitting portrayal of the suffering of prisoners at the inhumane Syrian torture facility in Palmyra

It is thought that the method came to Syria via the Stasi, the security forces of the German Democratic Republic; other sources report that the brutal torture method was brought into the country by Nazi henchmen on the run.

In any case it is a fitting title for their play, says Bouban. Because this is the message that these survivors of Syrian jails want to convey – the horror of torture.

"I want to see blood"

On the left of the stage there is a communal cell, on the right three single cells. Props: Plastic buckets containing food for the detainees, a tyre, into which the twisted body of a prisoner is forced before the guard whips the soles of his feet until they bleed, before making him march on the spot. And of course the German Chair. In this case it is a regular German chair to symbolise the horrific torture instrument.

Strictly speaking, this is not theatre in the traditional sense. Apart from the guard roles, the former prisoners are playing themselves. There is also not much of a plot. The action takes place during the morning in the torture facility at Palmyra, a regular morning; after all, as the men explain to reporters beforehand, "there was less violence in the afternoons."

So this is a morning that becomes a life-threatening torment. While the prisoners eat out of the buckets, the guards strike them mercilessly with their leather whips. "Hey, man, you're dropping your food," yells the chief prison guard as one of his victims lets go of his bowl in pain. To a younger guard who is not cracking his whip hard enough he says: "I want to see blood, I always want to see blood!" Does the younger guard know who is serving out sentences here? "Bad, lowly guys, sons of bitches, spies."

The project is being coordinated and managed by Monika Borgmann, and the fact that the Lebanese have been able to bring their play to Germany after one performance in Beirut, is thanks to her. The German national has been living in the Lebanese capital for many years; not in the trendy part of town with all its bars and nightclubs, but in a poorer southern district controlled by Hezbollah. 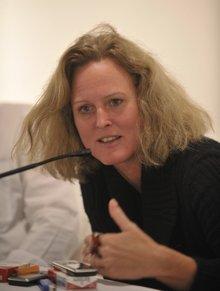 Bringing the horror of torture to the stage: Beirut-based filmmaker and journalist Monika Borgmann

​​"The Lebanese have done nothing to process the effects of the civil war," she says. More than two decades after the 1989 peace accord that ended the conflict and de facto installed the Syrians as occupying power, the country is still in a state of paralysis. "It was official policy just to turn over a new page," says Borgmann. The past should remain consigned to the past.

But Borgmann is convinced that in the long-term, no nation can recover in this way. This is the reason why she and her husband Loqman Slim set up the project "UMAM Documentation & Research". Its aim is to encourage processing of the war experience, as well to clarify human rights violations committed by Syria in Lebanon. It is thought that some 17,000 people disappeared during and directly after the civil war, and that some of these were taken to Syria. Human rights organisations say there are still more than 600 Lebanese nationals languishing in Syrian prisons.

At their expansive property in the south of Beirut, Borgmann and Slim have founded a large archive of documents about the war. The house resembles a library. There are rows upon rows of shelves full of books and newspapers, with computers, offices and even an exhibition room.

Words are not enough

When Borgmann met the ex-detainees in Beirut, a group of men loosely organised into a support group called "Former Lebanese Political Detainees in Syria" she relates how they repeatedly jumped up to recreate scenes and gesticulate as a way of expressing the terrible things that had happened to them in the past. The idea of turning their stories into a live performance seemed obvious. "Because words are not enough to describe this horror," says Borgmann.

After 45 minutes recreating this horror on the stage in Berlin, the former prisoners stand in front of the audience with their project manager Borgmann flanking Raymond Bouban, the 49-year-old with the bald head and the moustache. After he was released in an amnesty in the year 2000 and returned to Lebanon, it was initially difficult to find ways to talk about the injustice that had befallen him in Syria.

But ever since the Syrians left the country in 2005, Bouban has been talking about his experience and working closely together with survivor support groups. The whole world must learn about the horrors experienced in the past by his men, he says, and also about what's happening right now: "His cousin," says Bouban, pointing to one of the actors, "was with us and still hasn't returned yet."

When he's finished the performances in Germany, Bouban plans to return home to his family. He's married with two children – Peter and John – and works as a chauffeur. Maybe, he says, he and his men will perform the play in Switzerland. Or in Qatar. "But whether we do it or not, it doesn't really make any difference," he says. "Palmyra remains in our heads."

Captions:
Terrifyingly authentic: The live performance "Der deutsche Stuhl" is a hard-hitting portrayal of the suffering of prisoners at the inhumane Syrian torture facility in Palmyra.

Bringing the horror of torture to the stage: Beirut-based filmmaker and journalist Monika Borgmann

As Pride Month draws to a close, Richard Marcus delves into Saqi Books’ latest publication, "This Arab is Queer". Edited by Elias Jahshan, this anthology of essays is remarkable ... END_OF_DOCUMENT_TOKEN_TO_BE_REPLACED

A new exhibition, "Syria – Against Forgetting", at Cologne’s Rautenstrauch-Joest-Museum focuses on Syria's artistic and cultural heritage and pays tribute to the country before ... END_OF_DOCUMENT_TOKEN_TO_BE_REPLACED

With regard to gender justice, things look bleak in the Arab world. Laws typically discriminate against women, while national legislation all too often does not comply with the ... END_OF_DOCUMENT_TOKEN_TO_BE_REPLACED

This year’s Morgenland Festival opened with the premiere of Kinan Azmeh’s musical theatre piece, “Songs for Days to Come”, based on fifteen poems by contemporary Syrian poets. ... END_OF_DOCUMENT_TOKEN_TO_BE_REPLACED

Women in the Levant have long used needlework to depict the region’s history, its landscapes, customs and traditions. Intricately embroidered panels, varying in style, colour and ... END_OF_DOCUMENT_TOKEN_TO_BE_REPLACED

END_OF_DOCUMENT_TOKEN_TO_BE_REPLACED
Social media
and networks
Subscribe to our
newsletter