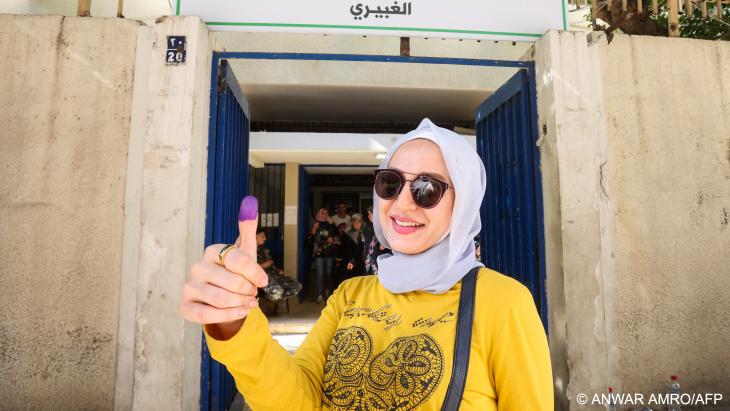 The results of Lebanon's first elections since multiple crises ravaged the country were expected on Monday, with opposition groups hoping for modest, but unprecedented gains.

According to provisional turnout figures, 41 percent of Lebanon's 3.9 million registered voters cast a ballot Sunday in 12 hours of polling that saw several irregularities and minor incidents.

A new generation of independent candidates hopes to kindle the kind of change that a 2019 protest movement failed to deliver, and looked likely to do better than the single assembly seat they clinched last time.

But most of parliament's 128 seats are expected to remain in the grip of the entrenched groups blamed for the country's woes – chiefly the economic downturn that plunged most of Lebanon into poverty.

For many voters, the election was a chance to vent their anger at the hereditary ruling elite that an October 2019 uprising, the country's financial default and a cataclysmic 2020 explosion in the heart of the capital failed to remove.

"These elections are first and foremost a means of rooting out this political class and getting back our Lebanon," said Shadi, a 38-year-old whose flat was destroyed in the Beirut blast, declining to give his second name.

Like many others who posted pictures on social media on Sunday, he chose to dip his middle figure in the bottle of electoral blue ink after casting his ballot.

Lebanon shares power among its religious communities, and politics is often treated as a family business. By convention, the president is a Maronite Christian, the premier a Sunni Muslim, and the parliamentary speaker a Shia.

The outgoing parliament was dominated by the Shia movement Hezbollah and its two main allies, the Shia Amal party of Speaker Nabih Berri, who has held the job since 1992, and President Michel Aoun's Christian Free Patriotic Movement.

Preliminary results from the Sunday election indicate that traditional parties will prevail.

But despite limited resources, opposition groups seemed optimistic about their results. Several breakthroughs were reported, especially in a district in south Lebanon, a stronghold for Hezbollah and its allies.

"It seems almost impossible to imagine Lebanon voting for more of the same," said Sam Heller, an analyst with the Century Foundation. "And yet, that appears to be the likeliest outcome."

One of the most notable changes in the electoral landscape is the absence of former prime minister Saad Hariri, which leaves parts of the Sunni vote up for grabs by new players.

Supporters of Hariri skipped elections and, in Beirut, some set up inflatable swimming pools to show their boycott of the vote.

Scuffles broke out in a handful of locations during voting and party supporters were seen shepherding people to polling stations, a recurring practice amid widespread vote-buying.

In a bankrupt country which can only supply two daily hours of mains electricity to its inhabitants, one of the main challenges facing the interior ministry was powering polling centres.

Despite government assurances, several outages were reported and in some polling stations, voters had to use the flashlights on their mobile phones to find the slot in the ballot box.

END_OF_DOCUMENT_TOKEN_TO_BE_REPLACED
Social media
and networks
Subscribe to our
newsletter