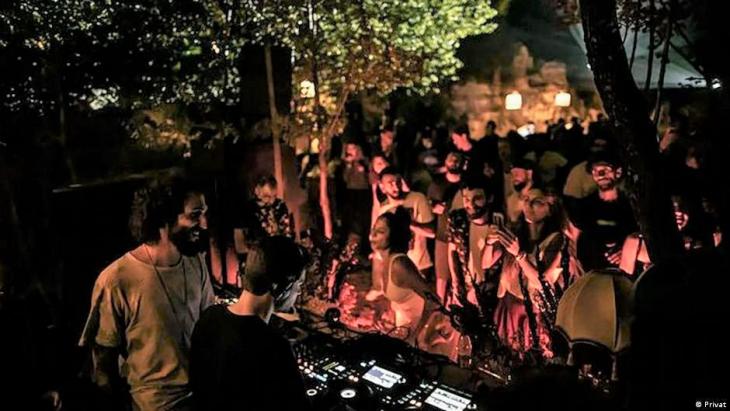 A pandemic, civil strife and an economic meltdown have conspired to bring Beirut's vibrant club scene to its knees. Yet the city needs parties more than ever. Kate Martyr reports

Once upon a time Beirut was the Middle East's nightlife capital. Party-goers from the region, as well as Europeans, headed to the city to enjoy its hedonistic nightlife culture where raving from Friday to Monday was nothing unusual.

"Two or three well-known international artists played every weekend," explained Rea, a Lebanese DJ and producer. Fees for artists could reach upwards of $100,000 (€88,000) as Beirut competed with Gulf party hub Dubai to book the biggest names.

But since 2019, residents of the city have been reeling from a financial crisis that has seen the Lebanese pound lose over 90% of its value in two years – propelling three-quarters of the country's population of approximately 6.7 million into poverty.

The nightlife industry has also had to contend with political instability, a huge explosion at the city's port on 4 August 2020 that killed over 200 people and caused extensive damage, as well as the COVID-19 pandemic.

Through it all, the club managers, DJs, producers and party-goers who comprise Beirut's nightlife have been determined to keep the party spirit alive. "Partying is one of the only outlets from thinking about [the political and financial] bulls***t, from drowning day by day," Raed al-Halabi, the manager of one of Beirut's remaining nightclubs, Ballroom Blitz, admitted. 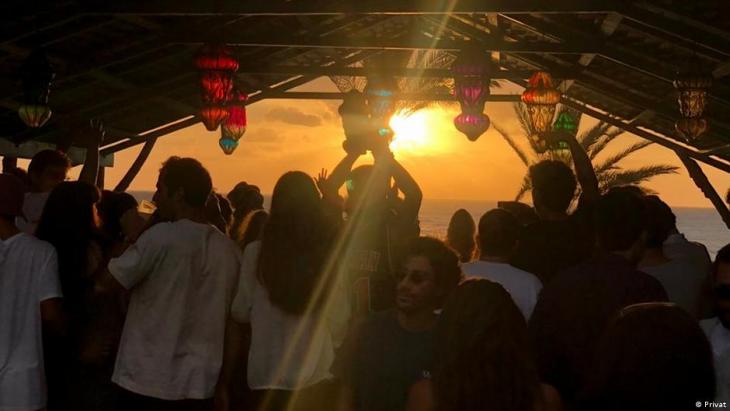 The city that never sleeps: once upon a time Beirut was the Middle East's nightlife capital. Party-goers from the region, as well as Europeans, headed to the city to enjoy its hedonistic nightlife culture where raving from Friday to Monday was nothing unusual. "Two or three well-known international artists played every weekend," explained Rea, a Lebanese DJ and producer. Fees for artists could reach upwards of $100,000 (€88,000) as Beirut competed with Gulf party hub Dubai to book the biggest names. Today, the clubs can no longer pay these fees and for some admission equals their monthly income

Ballroom Blitz is one of only two main electronic music-focused clubs that have survived the turmoil of the past years. Meanwhile, Beirut music institutions The Garden and Grand Factory were damaged in last year's port explosion and have not re-opened since.

Ballroom Blitz once booked international names "to try and introduce new sounds to a Lebanese audience," Raed explained, referring to Kode9, a Scottish DJ and Hyperdub label founder, and Afrodeutsche, a UK-based composer, producer and DJ.

But due to the falling local currency, the club is now unable to pay the fees required by international artists.

This has forced club management to return to its original plan of being a cultural institute – the club recently received funding from the Beirut-based Arab Fund for Arts and Culture to support local DJs and producers as part of an artist residency programme. "We have a gap as we can't import talent," Raed explained. "So it's very important to work on the talent we have here now."

Although several clubs have re-opened recently, the cost of entry and other related expenses of a night out have become prohibitively expensive for many Beirut residents, even with international artists left off the bill.

International students or NGO workers paid in U.S. dollars are among the few who can afford to attend, explained Beirut-based DJ Mira Barbara, who goes by the name Duchesse.

There has also been a revival of house parties, which provide a cheaper alternative for those struggling financially, according to Elie Aoun, a producer, DJ and one half of Beirut's Hypnotic Ltd music label, who goes by the name Lio.

It remains important to try and make parties accessible for all people because "rave culture started with oppressed people," Lio explains. "We need this clash of cultures [at parties]." 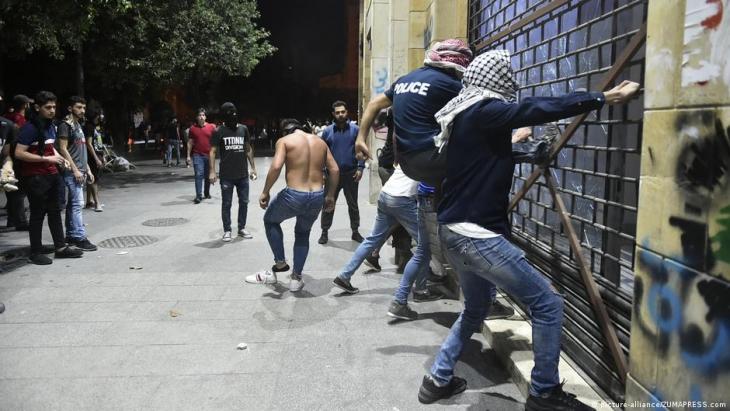 Demonstrators try to break into a shop during protests in Beirut in June 2020. The city has long since ceased to be the party capital of the Middle East. Since the explosion in the port in August 2020, the threat of state bankruptcy, political gridlock, the collapse of the Lebanese currency and galloping inflation, the outlook is depressing. "Partying is one of the only outlets from thinking about [the political and financial] bulls...t, from drowning day by day," Raed al-Halabi, the manager of one of Beirut's remaining nightclubs, Ballroom Blitz, admitted

In a bid to help out people hit by the financial crisis and coronavirus pandemic, Ballroom Blitz has also hosted the charity project, the Great Oven, which provides food for poorer communities.

While Beirut's struggling nightlife sector has sought innovative solutions, some of have not been able to overcome the challenges related to ongoing instability.

With some DJs now performing wedding sets to make money, according to Lio, well-established local artists are leaving Lebanon.

"Many DJ have moved to Dubai and Egypt, some have got 9-5 jobs in other Arab countries," Rea explained.

Lio himself is planning on leaving. "In Europe, you can think about what you want to do," he said, adding that he would be able to plan for the future overseas. He has his sights set on Barcelona. His record label partner has already moved to the Spanish city.

Rea is also considering moving on, saying that she felt producing music in the city would be traumatic after her newly-built production studio was wiped out in the port blast. Even though thick velvet curtains installed for soundproofing saved the room from being covered in broken glass, much of the equipment was destroyed and now she says she has no motivation "to fix anything".

While trying to organise an event a few months earlier, Rea said that the preparations were interrupted by protesters burning tyres and blocking roads, as well as fuel shortages and electricity cuts. "We were going to give up," she said.

Yet they decided to continue due to the "sense of freedom" that it provided.

The idea is to show that "we still exist, we're still here," Rea added. "Since everyone lost a lot, it has motivated us to come together and unite." Rea stressed that such community solidarity was key in a country that had experienced so much division.

On 14 October, street violence in Beirut killed at least six people, stirring memories of the country's 15-year sectarian civil war that ended in 1990.

"It's been a very community-driven year" for those in the nightlife industry, said Ballroom Blitz manager Raed. His aim is no longer to make money, "because there isn't any". But he wants his club to stay open because he "loves this place," he added. "It has brought people together and brings a lot to the country."

Moncef Marzouki was Tunisia's first democratically elected president after the fall of dictator Ben Ali. Today he is the most prominent critic of increasingly counter- ... END_OF_DOCUMENT_TOKEN_TO_BE_REPLACED

Asef Bayat, professor of Sociology at the University of Illinois, Urbana-Champaign, has been studying revolutions and how they affect people since 1979. In his recent book, " ... END_OF_DOCUMENT_TOKEN_TO_BE_REPLACED

The 2020 Beirut port blast was a traumatic experience for many people in Lebanon. A large number sought therapy in the aftermath. But, with doctors leaving the country, help is ... END_OF_DOCUMENT_TOKEN_TO_BE_REPLACED

A group of 20 social media influencers in Lebanon is seeking to de-escalate political tensions and overcome sectarian problems. Their outreach is impressive among the young and ... END_OF_DOCUMENT_TOKEN_TO_BE_REPLACED

Beirut in December was once a shopping extravaganza, where day-long traffic jams clogged streets decked out with flashing Christmas lights and building-sized billboards ... END_OF_DOCUMENT_TOKEN_TO_BE_REPLACED

Despite Syria's lengthy civil war, dictator Bashar al-Assad is now being courted by many governments in the Middle East as if nothing ever happened. The reasons for this vary. By ... END_OF_DOCUMENT_TOKEN_TO_BE_REPLACED
Author:
Kate Martyr
Date:
Mail:
Send via mail

END_OF_DOCUMENT_TOKEN_TO_BE_REPLACED
Social media
and networks
Subscribe to our
newsletter