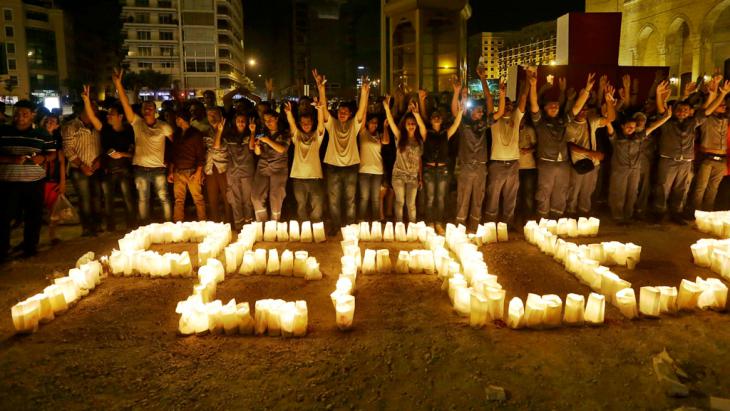 Lebanon: from amnesty to amnesia
Lacking a culture of remembrance

"In Lebanon, repression has become a permanent state of mind," says the journalist and Orientalist Monika Borgmann. With the archive "UMAM Documentation & Research", founded in 2004, she attempts to fill the gaps in the country's collective memory. Interview by Juliane Pfordte

Ms. Borgmann, there was civil war in Lebanon from 1975 to 1990. How does the country deal with memories of that time?

Monika Borgmann: The Lebanese state has never really come to terms with its past. We still speak today of the "war of the others", owing to the intervention of Syria and Israel, but in fact it was never just a war of the others. There is no national culture of remembrance, only individual memories that are coloured by each person's religious viewpoint. This is where the work of our organisation UMAM comes in: we want to make these fragmented memories accessible to all Lebanese – including the blind spots that are not talked about.

Can you give me an example?

Borgmann: Even today, the so-called "Wars of the Camps" that took place during the civil war in the Palestinian refugee camps are still a taboo subject. And the struggles within the various religious communities are another blind spot, although they were the most brutal battles of all because they took place in a confined space. Hardly anyone talks about the 1987 battles between the Shia Hezbollah and the Amal militia because both parties have common political interests today. In other words: the current political constellations determine what is discussed and what is swept under the rug.

What does your organisation do to close these gaps in collective memory?

Borgmann: We want to raise awareness about civil violence and memory among the general population through exhibitions, workshops and film screenings. For example, we showed the film "Shatila. On the way to Palestine", which deals with the Wars of the Camps, for the first time in Lebanon. We are also creating a public archive specialising in the civil war but also referencing the present. Our staff conducts daily research into whatever is being published and has been published on the civil war: from newspaper articles and scientific publications to photos of the 17,000 people still missing. We make these documents available to the public in the database Memory At Work. There is nothing else like this in Lebanon – a functioning national archive with documents relating to the civil war. 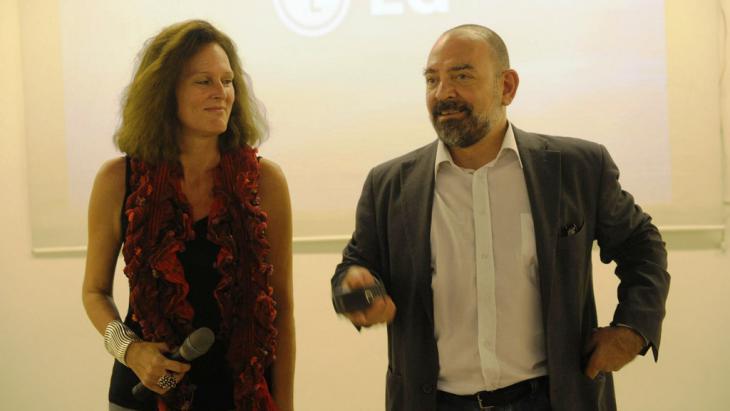 Monika Borgmann, born in 1963 in Aachen, studied Oriental studies and politics in Bonn and Damascus. She has lived in Beirut since 2001; in 2004 she founded the NGO "UMAM Documentation & Research" and the online archive "Memory at Work" with the Lebanese publisher Lokman Slim (shown right)

Why did you establish an institution like UMAM in Lebanon of all places?

Borgmann: I had already travelled to Lebanon several times during my student days in the late 1980s. The civil war made such a deep impression on me that I ended up returning there again and again. The country is incredibly intense – and full of contradictions. After my studies, I started working as a freelance journalist, mainly on the subjects of violence and memory. During my travels in Lebanon, I had come up with the idea of making a film about the perpetrators of the 1982 massacre of Palestinian refugees in the Sabra and Shatila camps. I began doing research on the ground in 2001, but I realised very quickly that there is no functioning national archive with documents relating to the civil war – nothing I could have used to back up the testimony of the attackers. Thus was born the idea for UMAM, which I founded in 2004 with Lokman Slim.

Your film "Massacre" is an essay on collective violence. The perpetrators of Sabra and Shatila tell of their experiences. How did you track down these men?

Borgmann: They are living in our midst. Lokman and I gained access to the milieu of the former Forces Libanaises, a Christian militia that was allied with Israel back then. We did not aim to become either their accomplices or their judges – it was a very complicated relationship. And it was even more difficult to build trust and to get the men to speak on camera. After the civil war, the amnesty condemned everyone to silence, victims and perpetrators alike. But after a while they forgot the camera and started to ramble on non-stop. Perhaps the only time in their lives they have ever done so. That was impressive.

The film was shown in Lebanon just once, on 25 September 2006. How did the audience react?

Borgmann: It was a historic day, because it was the day the Lebanese journalist May Chidiac was assassinated and we were unsure whether anyone would come. But the interest was so great that we had to organise a parallel screening in the foyer of the theatre. Many viewers were shocked and some left the auditorium. I was afraid at the time that survivors of the massacre, several of whom were sitting in the audience, would put pressure on me to reveal the identities of the perpetrators, because the men's faces were rendered unrecognisable in the film. Naturally we would not have given in to the pressure, but it turned out that just the opposite was the case: the Palestinians I was able to speak with were relieved. Finally, after 23 years, they heard the perpetrators' stories, which coincided with everything they had told themselves all these years.

The victims were Palestinian refugees. What role do their memories play in Lebanon?

Borgmann: The Palestinians' memories play no role at all in today's Lebanon. Some Lebanese perceive them instead more as a "threat", for two reasons: for one, the Palestinians were not merely victims during the Lebanese civil war, because the Palestine Liberation Organisation (PLO) was directly involved in the war until 1982. And for another thing, most Palestinians are Sunni Muslims.

Lebanon is a country with 18 religious communities and a confessional political system. And naturalising 300,000 to 400,000 mostly Sunni Palestinian refugees – in a country with four million inhabitants – would mean shifting the balance between the religions. At any rate, that's what many Lebanese fear. But the Palestinian refugee tragedy is also part of present-day Lebanon. So far, not many people in Lebanon have had the courage to openly admit that the refugees, who come mainly from northern Israel and not from the West Bank or the Gaza Strip, will probably never return to their former villages. Today, their frustration is immense: while Europe is opening its doors to the Syrians, the Palestinians have been living here since 1948 in miserable conditions without any prospect of improvement.

How does the fact that you are German influence what you do? 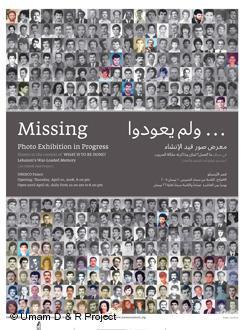 Borgmann: The German post-war discussion left a deep mark on me. It is completely natural for me to talk about the past, the Holocaust. On the other hand, Germany also had the "good fortune" of the Nuremberg war crimes trials. No such trials were ever held in Lebanon. Perhaps a closer "exchange" with Germany concerning how the Germans came to terms with the war would be of interest to the Lebanese. But unfortunately, the Holocaust is another taboo subject in Lebanon due to its political connection with Israel – a country that is at war with Lebanon.

Why is collective memory it so important?

Borgmann: A collective culture of remembrance could have helped Lebanon develop into a state with a national identity. Instead, religious affiliation takes precedence these days over nationality. Every country must confront its past at some point if it is to develop democratically. The example of Lebanon shows what happens when this is not the case: there is still no peace today. Many Lebanese wonder whether the war has in fact ever ended, or whether they are instead merely living through a different phase of it.

Forgetting can sometimes be crucial to survival. There have also been amnesties in other civil war countries, such as Spain.

Borgmann: Spain is an example of the success of this strategy, because the country has developed into a democracy since the amnesty of 1977. Although the memory of the Franco dictatorship was repressed for a long time, the country is now coming to terms with its past. In the case of Lebanon, repression has become a permanent state of mind. Neither amnesty nor forgetting has done anything to help: 25 years after the end of the civil war, the state is neither democratic nor functional. There is no President, no legitimate government and the state has not even managed to keep the Hezbollah from fighting in Syria despite the absence of a parliamentary resolution.

Racism exists in the Arab world. People with dark skin are discriminated against and often see their rights curtailed. Activists have had enough of such treatment and are starting ... END_OF_DOCUMENT_TOKEN_TO_BE_REPLACED

The work of artist Marwan Rechmaoui is both minimalist and complex and embodies the faultlines of his home city. Some of his latest pieces are now on show at a leading Beirut ... END_OF_DOCUMENT_TOKEN_TO_BE_REPLACED

Sex education – taboo in the Middle East. Or is it? Thanks to social media, millions these days are daring to ask everything about "it". Jennifer Holleis has the details END_OF_DOCUMENT_TOKEN_TO_BE_REPLACED

Newly discovered aerial photographs taken by the German Luftwaffe show what a keen interest the Germans took in British-controlled Palestine during the Second World War. Not only ... END_OF_DOCUMENT_TOKEN_TO_BE_REPLACED

Lebanon is suffering from the worst economic crisis in its history, which has led to a dramatic shortage of supplies. Electricity and petrol are hard to come by. ... END_OF_DOCUMENT_TOKEN_TO_BE_REPLACED

Lebanese cartoonist Bernard Hage has made a name for himself in a very short space of time, both at home and abroad. Now he sees no future for himself in Lebanon, and is about to ... END_OF_DOCUMENT_TOKEN_TO_BE_REPLACED
Author:
Juliane Pfordte
Date:
Mail:
Send via mail

END_OF_DOCUMENT_TOKEN_TO_BE_REPLACED
Social media
and networks
Subscribe to our
newsletter