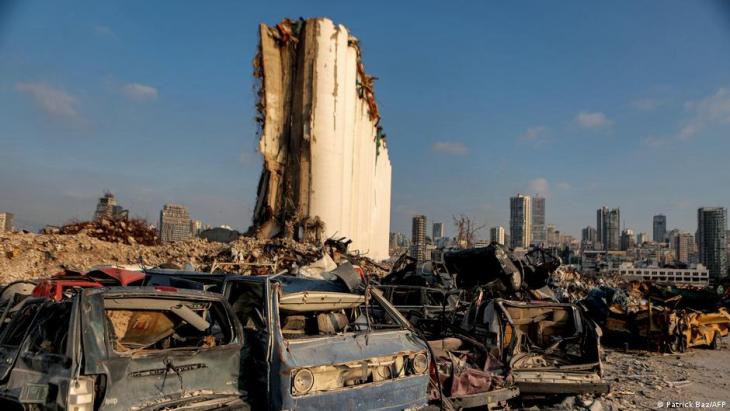 The 2020 Beirut port blast was a traumatic experience for many people in Lebanon. A large number sought therapy in the aftermath. But, with doctors leaving the country, help is not easy to find. Diana Hodali reports

It took a long time for Mira to talk about what she went through. On 4 August 2020, the day of Beirut's port blast, she was sitting in a coffee shop on the opposite side of the harbour. "Suddenly we heard a loud explosion," said Mira, who is 30 and asked that her real name not be used. "Windows shattered, and everyone took shelter on the ground." About 2,750 tons of unsecured stored ammonium nitrate had blown up, killing more than 200 people and injuring thousands.

"Since then, nothing has been the same for me," Mira said. "Ever since, I get scared when I hear loud noises or when I see smoke rising," she said. "I need to seek shelter indoors immediately." The death of a young female firefighter who did not survive the explosion particularly affected Mira:"I think of her often," she said. "She was engaged, like me." The fate of the young woman was all over the Lebanese media at the time. "I've always wanted to join the volunteer fire department, too," Mira said. "Only, my parents didn't let me do it." Though she didn't know the young woman personally, Mira said, "I feel guilty for having survived."

The images of the explosion were shocking for people around the world. Though some of the streets in the port area have since been rebuilt and repaired, many in Beirut continue to experience emotional trauma a year and a half later. "I have many friends who are seeking psychological help," Mira said. 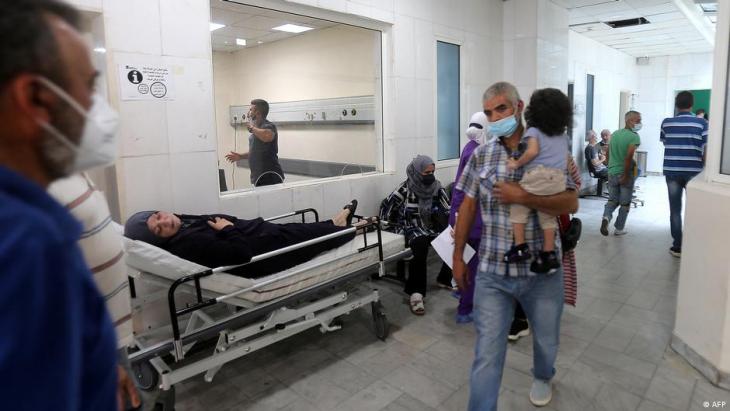 Hospital in Beirut. Lebanon's healthcare system has long since reached breaking point – not least because of the coronavirus pandemic. The cost of medicines has skyrocketed since Health Minister Firas Abiad announced in early November that subsidies for medicines for chronic diseases would be abolished. Medicines for mental illnesses such as depression and schizophrenia are now three times as expensive

"We don't have national surveys in Lebanon about the extent of mental health problems, but we can look at trends, at clinical trends, and look at what we see in clinics. And clearly, over the past two years, more people have been entering the mental health care system, seeing doctors, psychologists, therapists," reveals Dr. Joseph El-Khoury, a professor of psychiatry and the president of the Lebanese Psychiatric Society. A lot of these patients attribute – temporarily at least – their problems to that period or to events in that period. "We have seen a rise in post-traumatic stress disorder (PTSD) after the Beirut blast, as well as a rise in anxiety and depression, which are generally the type of mental disorders happening in response to stressful events," Khoury said.

Khoury said it was difficult to attribute mental disorders to a single cause and that emotional reactions do not always have to stem from the various crises in Lebanon, which is home to a unique combination of stressors.

One crisis follows the next as the country lurches toward bankruptcy. The Lebanese pound, which was pegged to the dollar exchange rate for three decades, has lost about 90% of its value in the past two years. In its recent Lebanon Economic Monitor report, the World Bank describes the situation as one of the deepest economic crises in recent global history. Four in 10 Lebanese people are without a job, which has been exacerbated by the pandemic. Many businesses have closed down, and people are unable to access their savings because of the economic crisis.

Fears for the future

All of this had had an impact on Mira months before the explosion. As early as in late 2019, when the economic situation was already worsening, she noticed that her social behaviour was changing. "I developed fears about the future and asked myself: 'How can I build a life in this country?' or 'How can I have children in this country?'" Mira said. "I became more and more withdrawn, sometimes not leaving my room for days – just functioning."

Mira fully collapsed after her dog was poisoned. In the beginning of the pandemic, fake news was spreading that pets could also pass the virus. "That was so hard for me," Mira said. Now, Mira is meeting up with friends again. She occasionally goes to coffee shops. But the fear of unexpected noises and smoke persists. 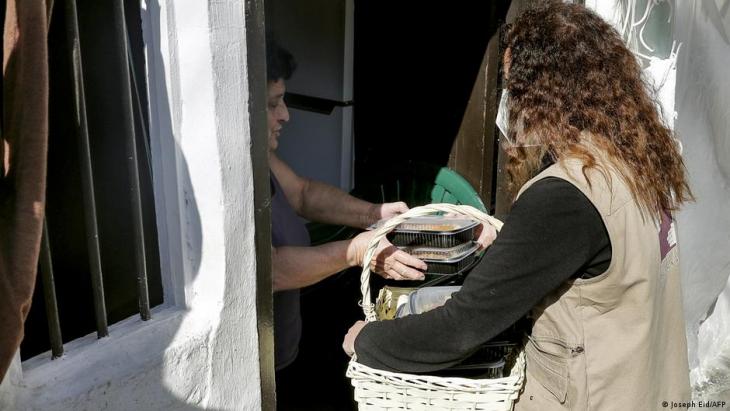 Many people are now dependent on food aid. Rampant poverty, political instability and the Corona epidemic are stressful factors that can trigger mental illness. "Over the past two years, more people have been entering the mental health care system, seeing doctors, psychologists, therapists," says psychiatrist Joseph Khoury. A lot of these patients attribute – temporarily at least – their problems to that period or to events in that period. "We have seen a rise in post-traumatic stress disorder (PTSD) after the Beirut blast"

Mira has confided in friends and asked for advice. "But, so far, I haven't found a psychologist," she said. "And I would like to have someone with experience in trauma." She doesn't want online therapy, which an increasing number of people are turning to. The psychologist Therese Ward said she has many patients who talk to her about their fears and worries in virtual sessions. "People are struggling to manage their everyday lives," Ward said. "They have fears about the future. They also often tell me about an inner emptiness."

In November, Lebanese Health Minister Firass Abiad announced a partial cut to subsidies for medication to treat chronic diseases. The cost of many drugs skyrocketed. For example, medicine for mental illnesses such as depression and schizophrenia are now three times as expensive as before the announcement.

"Most medicines have become either unavailable or extremely expensive since the governmental subsidy has been cut," Khoury said, adding that people are currently using what they have in stock, and some pharmacies are rationing. "Other people get medicine from Turkey, the UAE or Egypt," Khoury said.

Non-medicinal therapy is also expensive. "My insurance doesn't cover the cost of psychological treatments," Mira said. She would have to pay for her treatment herself. In the ongoing economic crisis, this is a challenge. Organizations such as the Lebanese NGO Embrace offer psychological support for free. But their service usually involves waiting periods, as more and more people seek free treatments.

Ward said a positive recent development is that there are fewer social stigmas about people experiencing mental illnesses now. Though she asked that her real name not be published in case future employers search for her on the internet, Mira talks openly about what is bothering her.

"I'm in limbo," Mira said. "I don't know yet what I want to do. I just know I need to seek help. I want to know why I feel this way, why I have these worries and fears, while those responsible for the explosion can sleep well at night."

To date, none of the people believed responsible for the port blast – one of the largest known non-nuclear explosions in history – have been brought to justice.

Over the New Year holiday, Mira, plans to visit some friends abroad with her husband. "We know that the next year will not be any easier," she said. "The Lebanese elections are coming up, and omicron is on the rise. So we want to get a little break."

Moncef Marzouki was Tunisia's first democratically elected president after the fall of dictator Ben Ali. Today he is the most prominent critic of increasingly counter- ... END_OF_DOCUMENT_TOKEN_TO_BE_REPLACED

Asef Bayat, professor of Sociology at the University of Illinois, Urbana-Champaign, has been studying revolutions and how they affect people since 1979. In his recent book, " ... END_OF_DOCUMENT_TOKEN_TO_BE_REPLACED

A pandemic, civil strife and an economic meltdown have conspired to bring Beirut's vibrant club scene to its knees. Yet the city needs parties more than ever. Kate Martyr reports END_OF_DOCUMENT_TOKEN_TO_BE_REPLACED

A group of 20 social media influencers in Lebanon is seeking to de-escalate political tensions and overcome sectarian problems. Their outreach is impressive among the young and ... END_OF_DOCUMENT_TOKEN_TO_BE_REPLACED

Beirut in December was once a shopping extravaganza, where day-long traffic jams clogged streets decked out with flashing Christmas lights and building-sized billboards ... END_OF_DOCUMENT_TOKEN_TO_BE_REPLACED

Despite Syria's lengthy civil war, dictator Bashar al-Assad is now being courted by many governments in the Middle East as if nothing ever happened. The reasons for this vary. By ... END_OF_DOCUMENT_TOKEN_TO_BE_REPLACED
Author:
Diana Hodali
Date:
Mail:
Send via mail

END_OF_DOCUMENT_TOKEN_TO_BE_REPLACED
Social media
and networks
Subscribe to our
newsletter