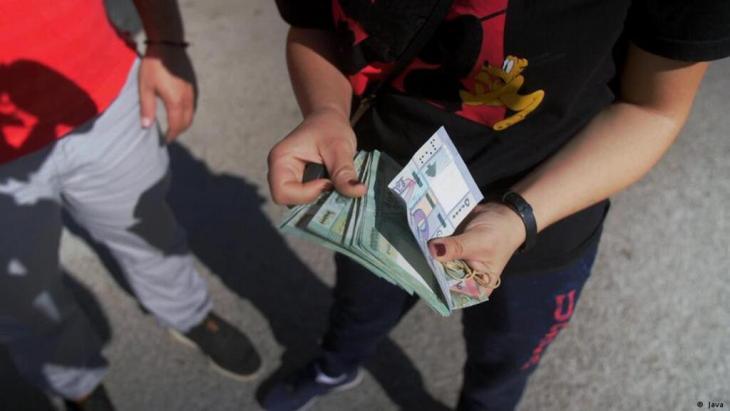 Lebanon was long viewed as the Switzerland of the Middle East. Until relatively recently, billions were deposited in its banks. Gulf states were among the foremost investors in Beirut. But this all came to an end in 2019. Now the troubled nation is gripped by the worst economic crisis in its history. Birgit Svensson reports from Beirut and Tripoli

A little girl sits at the bottom of the steps leading to the library and café Barzakh on Beirut's famous – or to be more precise, once-famous – shopping street, Hamra Street. The stars embedded in the pavement are reminiscent of the ones on Sunset Boulevard in Los Angeles, except the ones on Hamra Street are pitifully faded, just like the entire country.

Mira is begging for food, not for money or chocolate as children so often do in the Middle East. That's because Mira is hungry – and the six-year-old is not alone. "People are getting poorer and poorer," says Alexandre, commenting on the scene as he arrives at the café and orders an espresso, "and no one's doing anything about it."

It is claimed that even the soldiers serving in the Lebanese army no longer have enough to eat. On their US$50 wage, they can't afford to buy anything. Three years ago, that wage was still US$1,200. The Gulf state of Qatar donated food parcels for the soldiers at Christmas.

Military trucks loaded with these "care packages" from the emir in Doha were a common sight on the streets of Beirut. There are reports that such packages were distributed in Lebanon's second city, Tripoli, too. Lebanon, once the Switzerland of the Middle East, has become a poorhouse.

Shortly before Christmas at the port of Tripoli, a good hour's drive north of Beirut, a grain freighter docked and was swiftly unloaded. Clouds of dust rose up. The ship had come from Ukraine, said harbour workers, with a cargo of wheat. The "Razoni" hit the headlines back in August when it became the first ship to leave the port of Odesa five months after the start of the war and headed for Lebanon to avert the threat of famine there. 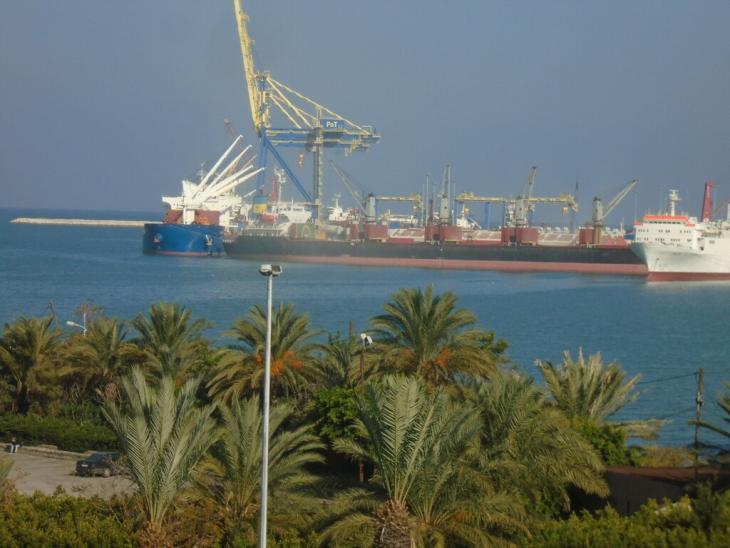 The port of Tripoli in Lebanon, where ships from Ukraine have been delivering grain since the UN and Turkey brokered a deal between Russia and Ukraine on the shipment of grain out of the war-torn country. The war in Ukraine and the resulting rise in grain prices has exacerbated an already difficult situation in Lebanon

The agreement between Russia and Ukraine brokered by the UN and Turkey to allow the grain shipments appears to be holding and has gone some way to alleviating the food crisis in Lebanon.

Bread continues to be subsidised and remains affordable. Nevertheless, more and more Lebanese citizens are slipping into poverty. It is estimated that 40 per cent of the country's population of 7.5 million are living below the poverty line on less than two dollars a day. It's thought that 300,000 Lebanese people have left the country since the beginning of the crisis in search of work so that they can support their families, who are no longer able to make ends meet. This has resulted in a brain drain that's taking its toll on Lebanon, as most emigrants are well-educated members of the middle and upper classes.

Political scientist Kristof Kleemann, head of the Friedrich Naumann Foundation in Beirut, which is affiliated with Germany's liberal Free Democratic Party, thinks it would be realistic to say that half of Lebanon's GDP now comes from abroad in the form of cash transfers from Lebanese people outside the country to their families back home. Kleemann's arrival in Lebanon coincided with the start of the economic crash in 2019, when mass protests exposed the creaking system and forced the government's resignation.

Kleemann's analysis is that this crisis is particularly pervasive, with inflation, national debt and a decline in economic output all at peak levels. "The banking and finance system has completely imploded," he says, adding that he witnessed how the wealthy Gulf states pulled their money out of Lebanon, thereby accelerating the collapse.

The Sunni Prime Minister at the time, Saad Hariri, had started to cooperate with the Shia Hezbollah. Saudi Arabia didn't like that at all. "But it wasn't just that," says Kleemann. "It was also the Lebanese who borrowed cheap money in Dubai and invested it for high rates of interest at home." The profits from this, which ran into the billions, were channelled abroad. Then, when the Lebanese banks could no longer pay the interest, the money was withdrawn. 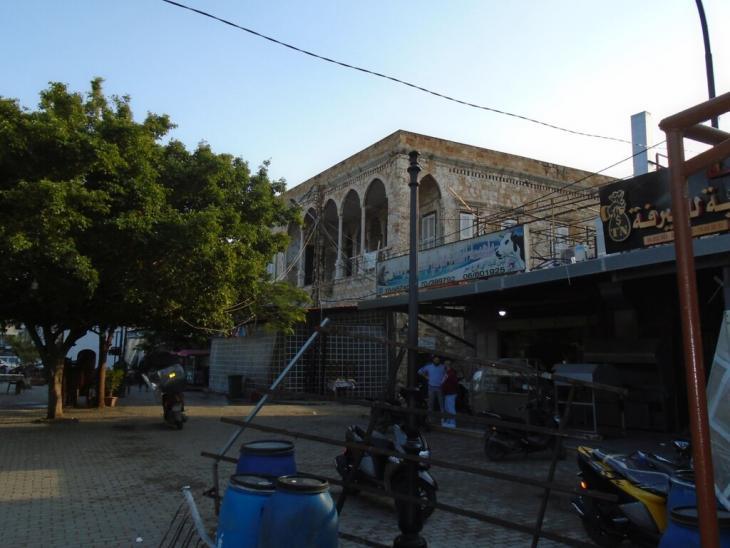 Lebanon in freefall: Political scientist Kristof Kleemann thinks it likely that half of Lebanon's GDP now comes from Lebanese people living abroad and sending money home to their cash-strapped families. It is estimated that 40 per cent of the country's population of 7.5 million lives below the poverty line on less than two dollars a day

"The state is bankrupt, and the losers are all those working in its service," says Mohammed Nasser, a lecturer in medical physics at the Lebanese University in Beirut. Before 2019, things were going well for him. He earned US$4,600 a month, was able to send his eldest son to the German school and was saving to buy a home for the family. He had US$60,000 in the bank.

Now he receives a monthly wage of US$152, his savings are frozen and he has had to take his son out of school because he can no longer afford the fees. Nasser's story is not unique. It's the same for teachers, doctors, judges, nurses, caregivers and many others.

Nasser is ready to take on any job abroad just to keep himself afloat. That's because everyone in Beirut fears that the national currency will experience a further downturn, especially as the Lebanese pound has been in freefall for months.

Recent events have lifted the lid on the extremity of the crisis in Lebanon. Between Christmas and New Year, the country's only functioning power plant couldn't even supply an hour of electricity daily. Generators provided a modicum of light and powered the small heaters protecting people against the cold and damp. Six kiloamperes cost between US$150 and 180 a month – that's the same as an average wage.

The government initially announced that people would be allowed to withdraw US$300 for Christmas; this amount was later reduced to US$200. Nevertheless, long queues formed at ATMs. This money was not a Christmas present from the government to the country's broken citizens; it is money that belongs to the account holders. However, because the government is afraid that it will run out of cash, withdrawals have been frozen and the banks closed.

In the midst of all this, news broke on the day before Christmas Eve that 35-year-old actor and TV presenter Stephanie Saliba, who is reported to be close to Riad Salameh, the 72-year-old governor of the Lebanese Central Bank, had between 2019 and 2022 allegedly funnelled billions out of the country to accounts in Europe, acquired three luxury properties in Beirut and drawn a monthly salary of US$25,000. As the Lebanese daily Al Akhbar reported, a court in Beirut has frozen her assets and launched an investigation against her.

Meanwhile at the Café Barzakh on Hamra Street, customers are certain that the powerful protector will find ways and means of ensuring that his young girlfriend emerges from the whole matter unscathed. 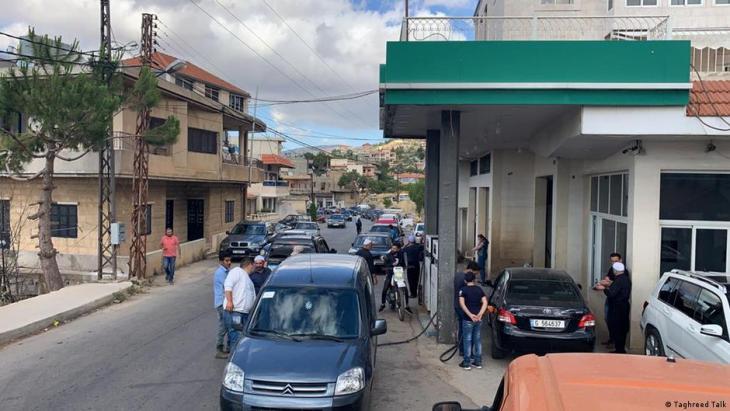 A shortage of petrol is yet another problem facing many Lebanese people. According to the autumn 2022 issue of the World Bank's Lebanon Economic Monitor, the economy of Lebanon continues to contract, and the Lebanese pound continues to depreciate sharply. This has caused surging inflation, which is impacting the poor and vulnerable the most

In Lebanon, business and politics are inextricably linked. The country's destructive system of confessionalism, which divides up power proportionally along ethnic and religious lines, fosters corruption and nepotism. The protest movement wanted to put an end to this system once and for all. It wanted a government of technocrats elected in a democratic poll. But those holding the political cards want to obstruct those goals at all costs.

The search is currently on for a new president after the tenure of the previous president came to an end. Presumably the new president will have to be a Christian, a Maronite, because according to Lebanon's system of government, the president is a Maronite Christian, the prime minister a Sunni and the speaker of the parliament a Shia. The fronts are entrenched.

"The explosion at the port in August 2020 completely pulled the rug out from under us," says hairdresser Nabil Hajjar. The words 'Haute Coiffeur' are emblazoned on the door of his salon. A wash and cut costs US$7, a price "that people can still just about afford to pay in this neighbourhood," he says.

Hajjar should have put his prices up long ago: he is exceptionally good at what he does and his energy consumption is enormous, with his generator running full throttle all day. "But then no one would come anymore," he says. Hajjar has worked in this salon for 30 years, which he took over only two years ago when he bought out his boss, who could no longer work.

When the warehouse exploded, he initially thought it was an earthquake. When he heard the second explosion, he thought it was a terrorist attack. Hajjar's salon is about 300 metres from the port as the crow flies. Even today, more than two years on, what remains of the huge warehouse thrusts into the Beirut skies like some sort of memorial. A section of the ruin recently caved in. There's still rubble on all sides, a reminder of the catastrophe that claimed the lives of more than 200 people.

French President Emmanuel Macron was recently forced to concede that his campaign to rescue Lebanon in the wake of the explosion had come to nothing. In August 2020, he organised a donor conference for Lebanon. But the reforms that were required by the conference were never introduced. "The leadership must go," said Macron shortly before Christmas. But just how the country is supposed to get a new government is anyone's guess – including Macron's.

Translated from the German by Nina Coon.

The book "The Invention of the Maghreb: between Africa and the Middle East" prompts us to review basic terminology. This includes terms that we use almost every day as if they are ... END_OF_DOCUMENT_TOKEN_TO_BE_REPLACED

Asmaa al-Atawna's debut novel "Missing Picture" has been published in German translation (Keine Luft zum Atmen – Mein Weg in die Freiheit). In it, she describes life in Gaza from ... END_OF_DOCUMENT_TOKEN_TO_BE_REPLACED

To celebrate the bicentenary of the deciphering of the Rosetta Stone, the British Museum is running an exhibition entitled "Hieroglyphs: unlocking ancient Egypt" until February ... END_OF_DOCUMENT_TOKEN_TO_BE_REPLACED

Since Russia invaded Ukraine, Europe has been trying to find alternatives to Russian gas, inevitably zeroing in on the Arab Gulf states. In his commentary, Yemeni politician ... END_OF_DOCUMENT_TOKEN_TO_BE_REPLACED

Nouara may be 65, but she is ready to join thousands of others who burn their ID and pay traffickers for the chance of a new life in Europe. Zineb Bettayeb reports END_OF_DOCUMENT_TOKEN_TO_BE_REPLACED

END_OF_DOCUMENT_TOKEN_TO_BE_REPLACED
Social media
and networks
Subscribe to our
newsletter