While the young activists started to get minimal media attention, the crowds attending the rallies grew larger. Speaking to my parents, older relatives and even older bystanders around the protests, they all had similar concerns. "What if this leads to instability and bigger problems?" they would usually ask.

It was obvious that they had the civil war at the back of their minds, which pitted Christian against Muslim, leftist against nationalist...etc. But the rubbish crisis was different in almost every way possible. The piles of festering rubbish didnʹt affect just one of Lebanonʹs 18 religious sects. It affected everyone. And the young men and women that did not live through the war were fed up. They could not just sit back and tolerate as their parents continued to. 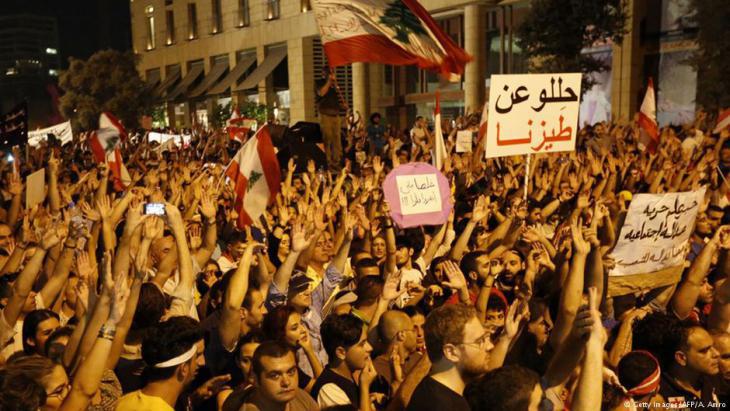 Weʹve had enough: triggered by a waste disposal crisis, a new movement formed in Lebanon. Yet the "You Stink" campaign was more than an initiative against unsolved rubbish problems; it was also a rebellion against Lebanon's family clans and confessionalism

Iʹve been to many protests over the years in Lebanon for a wide variety of issues and causes: secularism, opposing illegal Parliament term renewals, campaigning for a domestic violence law, LGBTQ rights, among others. This was different.

This was the first cause in many years that the whole country, which is divided along sectarian and political lines, could agree on. This was not a Christian issue or a Muslim issue, a religious issue or a secular issue. This was about corruption and the failure of our leaders, something all Lebanese could agree on.

This was rage at a government that clearly did not care about its citizens at all. I felt that the rubbish wasnʹt the only issue, but it was just on the top of the list. It was the final straw.

In Lebanon, the moment the police forcefully end a protest or when the government turns a blind eye long enough, the movement dies out. But this was different. When the police attacked protesters with water cannons, rubber bullets and mass arrests to try and stop protests from taking place, more people turned out and the crowds grew. When the police lobbed tear gas canisters, protesters threw them back. And, of course, people came back the next day in larger numbers.

When Iʹd ask several protesters whether they feared police violence and arrest, they would tell me that they had to be on the streets. "If not us, then who?" was a common response.

Local and international media were present and Beirut was centre-stage. Families from all backgrounds joined the young protestors. They chanted: "The people demand the fall of the regime."

This was a generation that hadnʹt lost hope the way the last one did. Living through 15 years of war is soul-destroying. The people that made up the majority of the protestors were willing to fight for a better life and were willing to take matters into their own hands.

While our parents put stability first, fearing another repeat of the civil war, this new generation saw things differently. Some of the older people did eventually take to the streets, but many others chose to support the protests from a distance.

Theyʹd sometimes tell people as they pass by that they are happy they are doing this or cheer them on from a distance. However, many would also observe with an emotionless look on their face, not being sure what to make of it.

The anti-Israeli Quds Day did not take place this year – a first both for Iran and Lebanon's Hezbollah. While Hezbollah leader Nasrallah sees his organisation in a state of siege ... END_OF_DOCUMENT_TOKEN_TO_BE_REPLACED

In Lebanon, the local currency has slumped to a record low, people are losing their jobs and the price of food is skyrocketing. Despite the threat posed by the coronavirus, ... END_OF_DOCUMENT_TOKEN_TO_BE_REPLACED

With social distancing impossible in tents, a coronavirus outbreak in one of Lebanon's Syrian refugee camps would quickly turn catastrophic. Yet, many Syrians have more ... END_OF_DOCUMENT_TOKEN_TO_BE_REPLACED

Lebanon's economy is imploding and with it social stability. While the country’s politicians understand the depth of the crisis, they have used the coronavirus lockdown, argues ... END_OF_DOCUMENT_TOKEN_TO_BE_REPLACED

Churches in the Middle East – Coptic, Eastern Orthodox, Maronite – typically share the conservative values of their Islamic surroundings. Yet the resistance of Arab Christian ... END_OF_DOCUMENT_TOKEN_TO_BE_REPLACED

According to the latest Reuters tally, more than 2.54 million people are now reported to have been infected by the novel coronavirus globally and 177,004 have died. As Muslims ... END_OF_DOCUMENT_TOKEN_TO_BE_REPLACED
Author:
Kareem Chehayeb
Date:
Mail:
Send via mail

END_OF_DOCUMENT_TOKEN_TO_BE_REPLACED
Social media
and networks
Subscribe to our
newsletter