The protests were like a snowball picking up speed and growing rapidly. Statements from authorities and political leaders were met with bigger protests and louder calls for the resignation of the government.

Given that my childhood wasnʹt tarnished by the war, I can understand why an escalation concerned my family, but as a journalist trying to cover the protests, I struggled to contain my excitement.

The police were ruthless; they shot rubber bullets from short range, causing many injuries. They beat protesters as they tried to run away. They attacked journalists and anyone who tried to help people caught in the chaos. Mohammad Kassir, a college student mere months from his engineering degree, was shot in the back of his head and fell into a coma. Though Kassir survived, his life will never be the same. 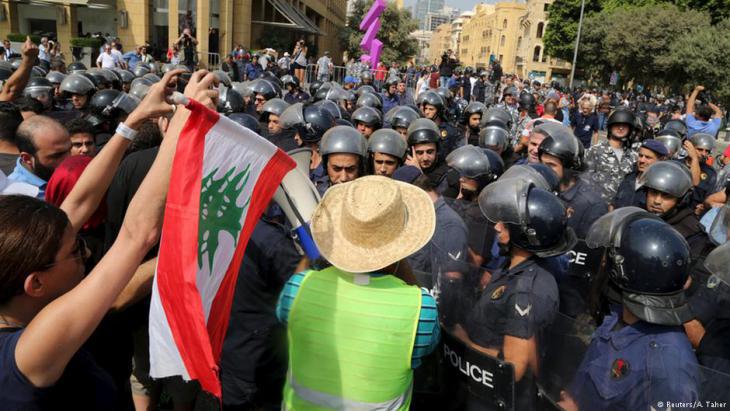 Fed up with political mismanagement: "With the government looking like it didnʹt care that we were drowning in filth, young people began to take the streets. It started out with small marches and rallies. There werenʹt more than a few dozen people. They carried signs and bullhorns. They called on people watching from their balconies to come down and march. And they did," recalls Kareem Chehayeb

I remember my parents and parents of friends heartbroken over the incident. They asked me and others who were covering the protests or protesting to not end up in his situation and to stay home instead and that it wasnʹt worth the risk. Lebanese Red Cross ambulances zoomed off to the nearest hospital every few minutes when clashes escalated.

Protests would go on all day and all night. At night, the riots escalated. But the protests only ended when people left the streets fearing their safety, or in an ambulance, or a police van. Standoffs between young protesters and riot police became routine.

Downtown Beirut was destroyed during Lebanonʹs civil war. It was rebuilt but without soul. It became an expensive area with nothing but banks, office buildings and pretty facades covering empty buildings. Where were the people?

The protests brought downtown Beirut back to life. For a brief period, downtown was full of people young and old. They talked. They laughed. They took selfies with their friends, sprayed graffiti, vented their frustrations and clashed with the police. They talked about possibilities that summer. They discussed what Lebanon could be.

When police built a concrete wall, artists painted anti-government murals within minutes. People gathered by the wall to continue their conversations, using it as shade.

The anti-Israeli Quds Day did not take place this year – a first both for Iran and Lebanon's Hezbollah. While Hezbollah leader Nasrallah sees his organisation in a state of siege ... END_OF_DOCUMENT_TOKEN_TO_BE_REPLACED

In Lebanon, the local currency has slumped to a record low, people are losing their jobs and the price of food is skyrocketing. Despite the threat posed by the coronavirus, ... END_OF_DOCUMENT_TOKEN_TO_BE_REPLACED

With social distancing impossible in tents, a coronavirus outbreak in one of Lebanon's Syrian refugee camps would quickly turn catastrophic. Yet, many Syrians have more ... END_OF_DOCUMENT_TOKEN_TO_BE_REPLACED

Lebanon's economy is imploding and with it social stability. While the country’s politicians understand the depth of the crisis, they have used the coronavirus lockdown, argues ... END_OF_DOCUMENT_TOKEN_TO_BE_REPLACED

Churches in the Middle East – Coptic, Eastern Orthodox, Maronite – typically share the conservative values of their Islamic surroundings. Yet the resistance of Arab Christian ... END_OF_DOCUMENT_TOKEN_TO_BE_REPLACED

According to the latest Reuters tally, more than 2.54 million people are now reported to have been infected by the novel coronavirus globally and 177,004 have died. As Muslims ... END_OF_DOCUMENT_TOKEN_TO_BE_REPLACED
Author:
Kareem Chehayeb
Date:
Mail:
Send via mail

END_OF_DOCUMENT_TOKEN_TO_BE_REPLACED
Social media
and networks
Subscribe to our
newsletter