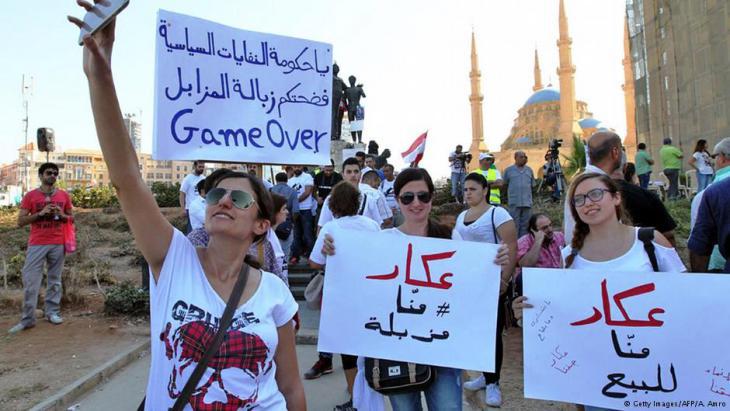 Triggered by a waste disposal crisis, a new movement has formed in Lebanon. Yet the "You Stink" campaign is more than an initiative against unsolved rubbish problems; it is also a rebellion against Lebanon's family clans and confessionalism, a system that divides up political power among the country's religious communities in proportion to their percentage of the population. By Karim El-Gawhary

For many Lebanese, it's not just the rubbish on the streets that stinks to high heaven, but their entire political system. In the course of their largest rally to date last Saturday (29 August 2015), tens of thousands from all over the country gathered in Beirut's city centre to demonstrate against their politicians in the name of the new "You Stink" movement.

The waste disposal crisis has now become a symbol: the political system, based on proportional power for religious groups and controlled by family clans, no longer works; the state is collapsing.

For more than five weeks now, no rubbish has been collected in Lebanon. Refuse is piling up all over Beirut. In many other areas, it is simply being tipped out in the countryside. The reason is that the previous waste disposal contracts with private companies have expired and a previously used landfill site filled up and had to be closed. The parties, Shia, Sunni, Christian and Druze politicians and corrupt civil servants have been unable to reach agreement on new contracts for months.

"The rubbish has roused the Lebanese from their slumber"

Marwan Maalouf is one of the organisers of "You Stink". In an interview with Qantara.de, he explained the background to the movement: "The whole thing reached the point where not only the rubbish on our streets stinks, but our politicians do too." For Maalouf, the issue is no longer about finally getting rid of the rubbish. "The rubbish has roused the Lebanese from their slumber. They know there's a corrupt political class; they know the way the religious communities are tied up in it. But they had to be woken up to this fact."

The mainly young organisers are attracting more and more activists with their demands. Although the movement was originally only concerned with getting the rubbish collected again at last, they are now demanding the environment minister's resignation within 72 hours. Aside from that, the interior minister is to be held accountable for the brutal police force used against demonstrators the weekend before last. 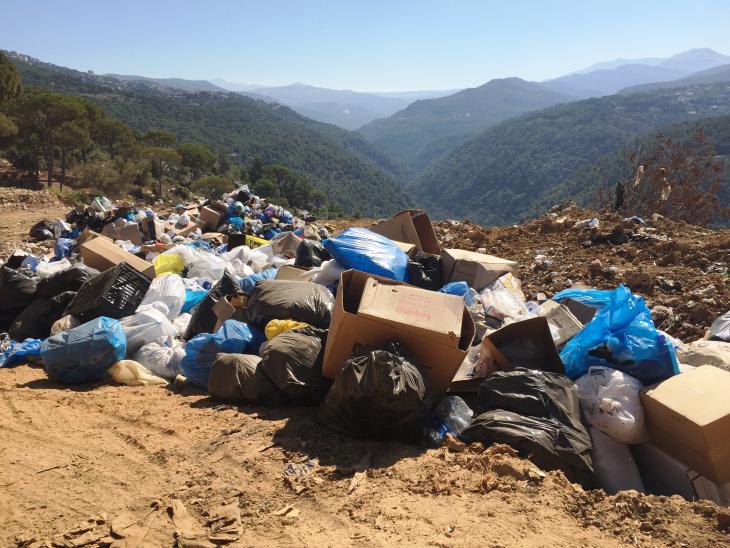 Environmental and political bankruptcy: in Lebanon, politicians' inability to get a grip on the country's rubbish problem is leading to the emergence of illegal rubbish dumps across the country, such as the one pictured here. Stinking piles of rubbish have also been mounting up on the streets of Beirut since July because one of the city's biggest landfill sites was full and had to close

The police used tear gas and water cannons when a small group tried to storm the government quarter, which was sealed off with barbed wire. Many peaceful demonstrators were among the 300 injured. Last weekend's demonstration, on the other hand, remained peaceful; many families attended and there was a festival atmosphere.

"This is just the beginning," announced Rasha Halabi, another leading figure in the movement, garnering thunderous applause from demonstrators in Beirut's city centre after reading the movement's demands, including a call for new elections. The country has been without a president for 18 months, and parliamentary elections have been postponed twice. For the "You Stink" movement, that raises the issue not only of the inefficiency of state services, but also of the legitimacy of both the parliament and the government.

Half an hour's drive away from Beirut, in a picturesque mountain landscape with a breath-taking view of the sea, a visibly frustrated young woman meets us. She wants to show us something, says the environmental journalist Nadine Mazloum. She takes us to an illegal rubbish dump for the Romana local authority. This is by no means an isolated case. The chirping of cicadas and twitter of birdsong is interrupted every few minutes by the rumble of an arriving truck. Each one drives up, reverses to the edge of a cliff and tips its load of waste into the countryside. The immense pile of rubbish gives off an unbearable stench.

"All this will seep into the ground water as soon as it rains. Then the rivers will carry it downstream and the wind, which is often strong in the winter, will scatter the plastic across the entire landscape," says Mazloum. Many of these illegal dumps, she says, are right on the coast. "It's only a matter of time before the tides carry the first rubbish towards Europe," she warns. "Everyone's talking about politics, but this is also an environmental disaster." When a car speeds up and an angry village policeman gets out, threatening to arrest her, she has to make a quick getaway.

Back in Beirut, Maha Yahia of the Carnegie Foundation explains that the crisis is far larger than the waste disposal problem. "The Lebanese have had enough of their political identity being determined solely by their religious affiliation." Corruption has reached a level "that is no longer bearable because it has negative consequences on everyday life."

Lebanon is suffering from the worst economic crisis in its history, which has led to a dramatic shortage of supplies. Electricity and petrol are hard to come by. ... END_OF_DOCUMENT_TOKEN_TO_BE_REPLACED

Lebanese cartoonist Bernard Hage has made a name for himself in a very short space of time, both at home and abroad. Now he sees no future for himself in Lebanon, and is about to ... END_OF_DOCUMENT_TOKEN_TO_BE_REPLACED

A new survey by Arab Barometer adds numbers to the narrative that COVID has led to a harsher reality for women in the Middle East and North Africa. By Jennifer Holleis and Razan ... END_OF_DOCUMENT_TOKEN_TO_BE_REPLACED

The young activists from the Minteshreen movement want to provide an alternative to the political corruption of the elites. For them, the state is more important than religion. By ... END_OF_DOCUMENT_TOKEN_TO_BE_REPLACED

They’ve already got the Louvre; they’ll soon have a Guggenheim Museum as well – and now the Emirates have added literature to their quest for cultural supremacy in the Arab world ... END_OF_DOCUMENT_TOKEN_TO_BE_REPLACED

END_OF_DOCUMENT_TOKEN_TO_BE_REPLACED
Social media
and networks
Subscribe to our
newsletter