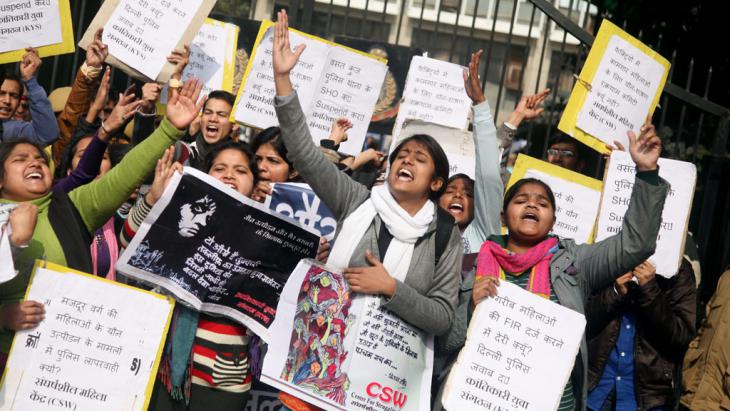 The Indian government's ban on the broadcasting of "India's Daughter", a documentary about the fatal gang-rape of a woman in New Delhi in 2012, has reopened the debate about the attitude to violence against women in the country. In the wake of this dreadful crime, women and activists are resorting to new measures to create awareness and challenge sexual harassment in the country. By Roma Rajpal Weiß

The Indian government's ban on the documentary "India's daughter" by Leslee Udwin, a British filmmaker, has once again put the spotlight on the problem of sexual violence in the country. Udwin's film documents the aftermath of the rape that took place in New Delhi on 16 December 2012 when a 23-year-old woman, Jyoti Singh (also known as Nirbhaya, which means "The Fearless One"), was brutally gang-raped by five men and a juvenile in a moving bus.

The Indian government has banned the broadcasting of the film in India on account of the "highly derogatory" statements made by one of the five convicted rapists, Mukesh Singh. The BBC broadcast the film last week, triggering a fiery debate.

Activists across India are divided about the ban. Twitter was flooded with hashtags such as #Indiasdaughter, #Nirbhayainsulted and #LifttheBan, reflecting the opposing opinions within Indian society. Some people believe that the film is insulting and tarnishes the image of the country. Others believe broadcasting the film is important.

There have been very mixed reactions in India to the banning of the documentary "India's Daughter" in which one of the men involved in the attack shows a lack of remorse for the rape and blames the victim for what happened. Some say the film prejudices the outcome of ongoing appeals and casts India in a poor light; others feel it is important that the shocking attitudes of the rapists are shown and discussed

A platform for a misogynist outlook?

NDTV, one of the country's largest English news broadcasting channels, was due to broadcast the film on International Women's Day, 8 March. In a letter to the channel, a group of activists are seeking a postponement of the screening of the film on the grounds that the "film infringes upon and compromises the rights of the rape victim and the accused men".

Mukesh Singh is in prison, waiting for the Supreme Court of India to hear his appeal against the death sentence. Experts fear that the "film carries the potential to prejudice the outcome of the legal proceedings." They believe that the interviews with the rapist and his defence lawyer advocate a misogynist perspective that treats women as objects deserving of sexual assault if they transgress patriarchal norms. This, they insist, works to push back the efforts of the women's movement in India, which is engaged in contesting and challenging this very mindset.

On the other hand, another set of experts is of the view that this is precisely why the film should be aired. Member of Parliament and cultural icon Javed Akhtar and actress Kirron Kher have voiced their concern over the ban, arguing that the film should be shown to create awareness about the existing mindset, paving the way for a wider discussion on the subject.

The Nirbhaya case marked an unprecedented change in many aspects. It made headlines across the world, and the death of the rape victim sparked an international outcry. In India, thousands took to the streets to protest against the ineffectiveness of the administration and the police. The government responded by passing several new laws and setting up fast-track courts. In the midst of all this, a wider debate opened up across all platforms and the silence was broken.

Suneha Kandpal, consultant for the International Center for Research on Women (ICRW) notes that since the Nirbhaya case, the number of crimes against women that have been reported has rocketed. People are actively discussing the issues of consent and a woman's freedom. "The subject of rape and sexual violence is no longer discussed in hushed tones; rapes and molestations were always happening, but the difference now is that people choose to talk about it on a public forum." 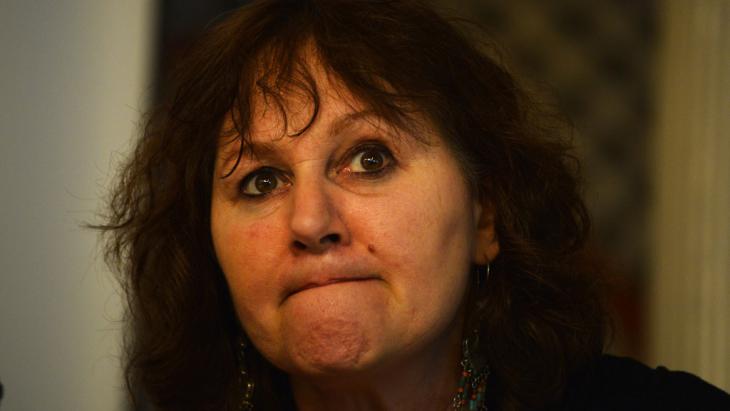 Leslee Udwin, director of the documentary "India's Daughter" (pictured here) has said that her whole purpose in making this documentary "was to give a gift of gratitude to India, to actually praise India, to single India out as a country that was exemplary in its response to this rape, as a country where one could actually see change beginning. The supreme irony is that they are now accusing me of having wanted to point fingers at India, defame India"

Smartphones are the new weapons

In the wake of the increased awareness that followed the Nirbhaya case, women in India are now also increasingly resorting to bolder measures. They are turning to social media, publicly shaming offenders as a means of fighting sexual harassment in the country. In a recent case, a businessman groped a woman travelling on a domestic flight in India and she immediately filmed the alleged perpetrator on her smartphone and uploaded the footage onto social networks. The public shaming of the man launched a debate on social media where many praised the woman's courage.

Kavita Krishnan, secretary of the All India Progressive Women's Association (AIPWA) thinks that public naming or public shaming is not necessarily a bad thing where sexual harassment is concerned. "When people capture something unacceptable on camera, it becomes something where there is a wider public conversation and the acceptance that the act was wrong."

Krishnan remarks that this case depicts the angry rejection of the fact that the perpetrator was counting on the fact that the woman would be so embarrassed by being groped that she would not take any action. "In the face of that assumption, there is an angry rejection of the assumption in that video. However, one has to be wary about the how the video is perceived by the viewer."

An important question is whether the viewer is simply a part of the mob on the social media that lauds the courage of this woman or whether the viewer is aware of sexual violence happening around him and decides to question it. Krishnan believes that such public shaming videos probe introspection in terms of the way we think about sexual violence.

"This is about people in society being self-reflexive about sexual violence. It is the voyeurs that need to be asked to think about themselves, it is about asking oneself, would you do this, would you be like this man on any occasion, has anyone else done it and you have covered it up, you have looked the other way, you have not stepped in, not intervened, not supported the victim." 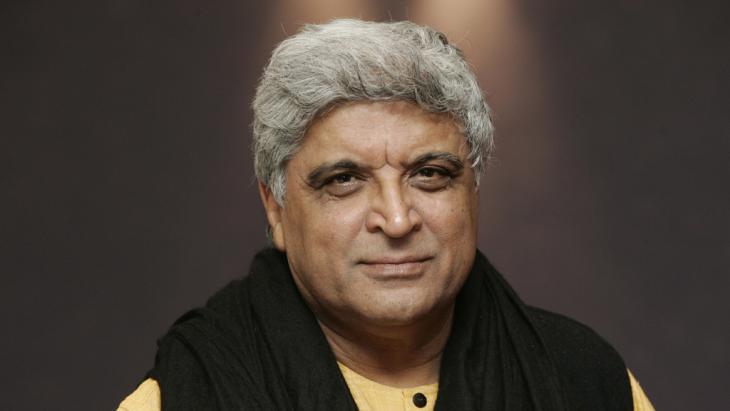 Several Indian MPs expressed their anger at the making of the documentary and the fact that it contained an interview with one of Nirbhaya's attakers. Writer and MP Javed Akhtar, on the other hand, welcomed it. Speaking in parliament, he said "It is good that this film was made, it will reveal how many men think like Nirbhaya's rapist"

A long way to go

While the need for introspection persists, Kandpal raises another important point. "The rape culture exists, and the debates around the issue are critical to create awareness. However, the problem is that concrete solutions are still at bay. Social media is a helpful but limited tool as it only reaches a certain socio-economic strata in society and this is not enough."

Kandpal travels by metro to work in the capital city and notices that the younger generation of men are lately a little more sensitised. Moreover, the problem of sexual harassment appears to have decreased a little because people are scared that somebody could pull out a camera and record the incident.

However, the larger issue of the mindset still needs to be addressed. Kandpal told Qantara.de "People are scared, but what is needed is that we as a society start taking responsibility and realise that we need to change first. In our society, it is a common belief that a woman and her honour lies in her vagina, so the vagina becomes the contested site for violence. This issue is at the core and it needs to be addressed urgently in a mature manner." She also says that there is a need to talk about these issues at school level so that boys learn to respect women at a young age.

Obscurantism is making it harder to prevent Covid-19, not only in Southeast Asia. Though India's lockdown was poorly planned, we must hope it will prove effective. By Aditi Roy ... END_OF_DOCUMENT_TOKEN_TO_BE_REPLACED

While some are beginning to protest the lockdown, others are unable to bury their loved ones in accordance with Islam. Here’s the latest from across the region END_OF_DOCUMENT_TOKEN_TO_BE_REPLACED

Coronavirus continues unabated. Iran remains a hub of infection, war-torn Syria has recorded its first case and Yemen is bracing itself for the worst. Here’s the latest from ... END_OF_DOCUMENT_TOKEN_TO_BE_REPLACED

As COVID-19 sweeps across the globe, it is forcing religions to adapt and take action to prevent infection. But experts warn against using the crisis to fuel conspiracy theories. ... END_OF_DOCUMENT_TOKEN_TO_BE_REPLACED

With borders closing and the opportunities for international travel shrinking by the hour, we take a look at coronavirus developments across the Middle East and the wider Muslim ... END_OF_DOCUMENT_TOKEN_TO_BE_REPLACED

As the global economy reels and everyday life grinds to a standstill, we take a look at the spread of coronavirus across the Middle East and the wider Muslim world – and the ... END_OF_DOCUMENT_TOKEN_TO_BE_REPLACED
Author:
Roma Rajpal Weiß
Date:
Mail:
Send via mail

END_OF_DOCUMENT_TOKEN_TO_BE_REPLACED
Social media
and networks
Subscribe to our
newsletter