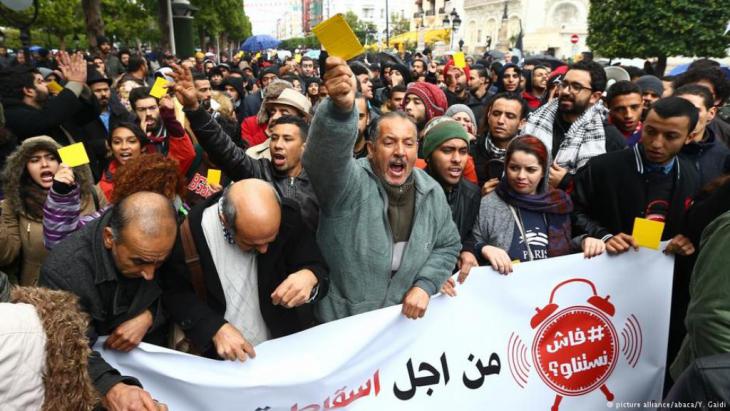 Lessons from the unrest in Tunisia

Free in name only

Although the protests in Tunisia are gradually dying down, the country′s political class still finds itself confronted with dissatisfaction from large sections of the population. Alongside political freedoms, the government now also needs to keep the social promises of 2011, says Tunisian journalist Ismael Dbara

In the winter month of January, scenes of protest and violence are nothing unusual in Tunisia. The North African country has seen events like these many times in the past, even before the 2011 revolution against Ben Ali′s regime.

January protests took place when tensions emerged between the Tunisian trade union congress, the "Union Generale Tunisienne du Travail" (UGTT) and the government of the late Habib Bourguiba in 1978, during the bread riots of 1984, the events in Gafsa in 2008 and the fall of Ben Ali′s regime in 2011.

In the years following the revolution, January has continued to be a "month of rage". But although it looks as though the protests are a direct reaction to the budget law, it is becoming clear that January 2018 must be viewed in a special light.

The demonstrators – most of them young Tunisians who also took part in the 2011 uprising against the Ben Ali regime – are still making the same demands seven years later. The economy is still in crisis, living conditions are still poor and they once again find themselves at the heart of social protests, though their calls for work, freedom and dignity are falling on deaf ears. 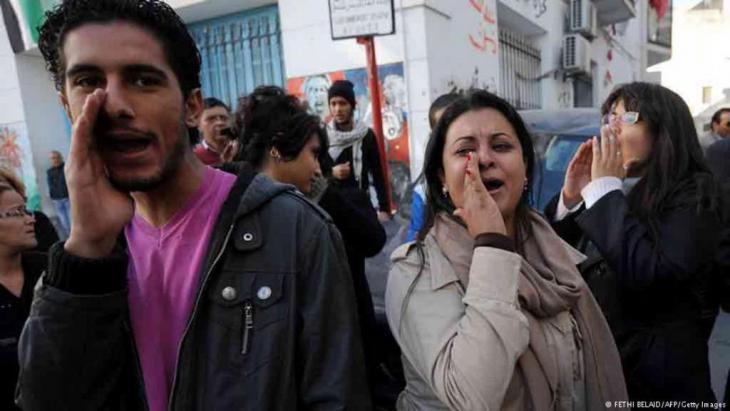 Cronyism and jockeying for position behind closed doors: many young Tunisians with excellent academic qualifications are frustrated by the ongoing unemployment among their generation, as well as by the unjust allocation of lucrative jobs in the education sector to those with close links to the country′s elite

This shows that the measures taken by successive governments to combat unemployment and bring price rises, inflation, debt and the trade deficit under control, as well as to halt the dinar′s fall in value against foreign currencies, have been unsuccessful.

In total, nine governments in Tunis′s Kasbah Square have failed to find a way out of the country′s increasingly acute economic plight, rekindling the Tunisian people′s rage day after day. The unemployment rate has now risen to around 15 percent, with the figure for the under-30s at almost 30 percent, while inflation has risen to 6.4 percent.

Production has now resumed in the incredibly important phosphate sector and income from tourism, which had suffered badly in the wake of terrorist attacks, is rising, but these things have had little positive impact on the socio-economic situation of many Tunisians. The same goes for the increased profits achieved by the agricultural sector in the past year.

Tunisia′s economic development has been on the same track since the mid-1980s. It began with the "programme of structural reform", which was essentially nothing but an asymmetrical mortgage in view of the international financial situation. Tunisia′s economy became dependent and increasingly vulnerable. As a result, it attracted increasingly modest volumes of investment, which it was only able to transform into jobs and growth in a very limited way. At the same time, workers′ social rights were gradually being stripped away.

The country′s economic decline resulted in a huge mountain of debt. Unemployment rose, the country′s middle classes were increasingly eroded and the regional divides between the better-off coastal areas and the economically underdeveloped interior widened.

Debt in itself does not necessarily present a problem, as long as it serves the creation of jobs and general prosperity. But here, the government borrowed increasing amounts to cover the budget deficit, rather than investing the money in the country′s development.

Tunisia now finances itself primarily through the scant support from its western partners and through taking on more debt. A major source of income is the money it receives via programmes and agreements with the International Monetary Fund (IMF), most recently three billion US dollars in May 2016. This took Tunisia′s foreign debt from 22.6 billion dollars in 2011 to 28.1 billion dollars by the end of 2016. A leap of around six billion dollars within five years: the national debt looks worryingly likely to pass the 30 billion mark in 2018. 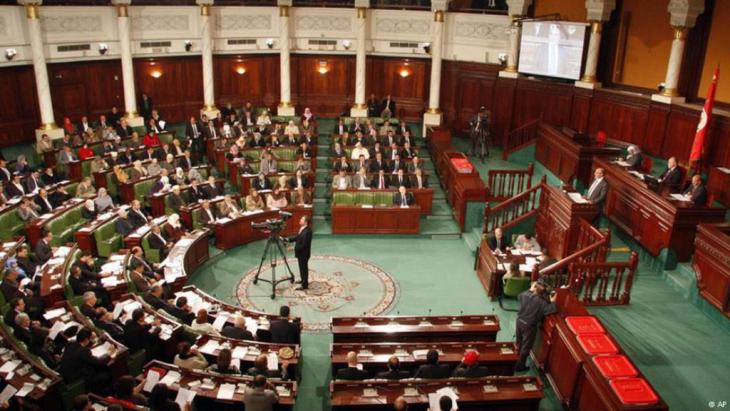 Massive trust deficit: "Parliament′s actions, the government′s explanations, the way that each faction has tried to blame the other and the heavy-handed response by the security forces, involving violence and arrests, had the combined effect of increasing protesters′ frustration still further and causing some demonstrations to escalate into violence," writes Ismael Dbara

Neither the government nor the opposition has reacted to the latest protests, which were spread geographically across 16 government districts, in an adequate fashion. Parliament′s actions, the government′s explanations, the way that each faction has tried to blame the other and the heavy-handed response by the security forces, involving violence and arrests, had the combined effect of increasing protesters′ frustration still further and causing some demonstrations to escalate into violence.

The government, under Prime Minister Youssef Chahed, has been waging a "war on corruption" for the past year and has now arrested a few high-ranking members of smuggling networks. But the fact that some senior members of his own party defended those who had been arrested, because of their relationships with them, caused outrage among the people of Tunisia.

The people′s faith in their government′s intention to put a stop to corruption and the hidden economy once and for all has been gradually broken down. And worse: critics accuse the government of pursuing policies that actually aim to protect or "legalise" these negative economic phenomena. This criticism is backed up by Tunisia′s low position year on year in the international rankings for combatting corruption, transparency, controlling and governance.

Parliament has also contributed to the mistrust and the gulf between the demonstrators and the political elite. There are a number of factors at play here: for one thing, parliament as a whole has a modest record in this area. For another, it has repeatedly passed laws intended to generate income for the treasury that have hit the poor hardest, while the wealthier sections of the population have been granted numerous economic privileges. 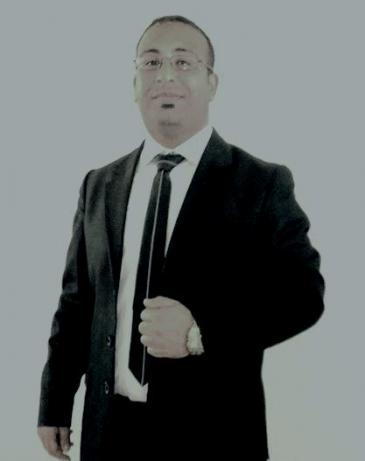 Time to act: "there is a need for a radically different approach to the solution of economic problems: imports bought with foreign currency must be more strictly regulated and more decisive action must be taken against the hidden economy and smuggling. More than half the gross domestic product is now attributed to the parallel economy – which means that no taxes or duties are being paid on 54 percent of Tunisia′s GDP… money that is not going into the state coffers,″ criticises Tunisian journalist Ismael Dbara

For many Tunisians, this has given parliament the reputation of being corruptible, which has led to further political alienation. To say nothing of the argument that years of neglect by politicians has created a kind of parallel society of dependents and the unemployed. As a result, the gulf between the privileged rich and the marginalised poor has widened and in economically deprived areas, a counter-culture to the political system and the elites has grown up. Criminality has spread, while material and symbolic violence has become a part of people′s identity in the poorest quarters of Tunisia.

Solutions kicked into the long grass

Opponents of the current ruling coalition of Ennahda and Nidaa Tounes, along with the majority of demonstrators, are well aware that influential corruption networks from the Ben Ali era have infiltrated the system, meaning that the majority of laws it has passed, decisions it has made and measures it has taken tend to reflect the interests of the wealthy, magnates and businessmen.

It looks as though Tunisia will only avoid the explosive social conflict that is now threatening to erupt through a change of track in economic policy. This change must be based on the new constitution, which advocates "positive discrimination" in favour of the deprived parts of the country and a decentralised leadership. So far, nothing more than lip service has been paid to these principles and they still haven′t been implemented.

There is also a need for a radically different approach to the solution of economic problems: imports bought with foreign currency must be more strictly regulated and more decisive action must be taken against the hidden economy and smuggling. More than half the gross domestic product is now attributed to the parallel economy – which means that no taxes or duties are being paid on 54 percent of Tunisia′s GDP… money that is not going into the state coffers.

Combatting tax evasion might provide the government with resources it could use to save it from rashly and pointlessly seeking salvation in debt, which has already failed as a solution in practice and has only intensified the crisis in recent times.

The implementation of these attempts to resolve the crisis, of course, conflict with the interests of a political elite that is closely linked to nepotism, corruption and political old-boy-networks adept at promoting their own interests. And this is the core of the Tunisian dilemma: the revolution only succeeded in getting rid of the tip of an authoritarian iceberg and establishing a government that is free in name only. Meanwhile, the pillars of the former regime, just like its economic and social networks, have been carried over practically unchanged.

The fact that the people of Morocco have responded with such maturity and responsibility to the protective measures imposed by the government to contain the coronavirus pandemic ... END_OF_DOCUMENT_TOKEN_TO_BE_REPLACED

The COVID-19 pandemic has triggered a public-health emergency and a steep reduction in oil prices, which represents a perfect storm for the Middle East, where everything from ... END_OF_DOCUMENT_TOKEN_TO_BE_REPLACED

Churches in the Middle East – Coptic, Eastern Orthodox, Maronite – typically share the conservative values of their Islamic surroundings. Yet the resistance of Arab Christian ... END_OF_DOCUMENT_TOKEN_TO_BE_REPLACED

Saudi Arabia has called on Muslims across the world to put their hajj preparations on hold for the time being. The corona pandemic is impacting one of the central pillars of ... END_OF_DOCUMENT_TOKEN_TO_BE_REPLACED

Ramadan begins this week even as the coronavirus pandemic up-ends life around the world. The crisis is forcing Muslims to re-think traditions and find new approaches to one of ... END_OF_DOCUMENT_TOKEN_TO_BE_REPLACED

END_OF_DOCUMENT_TOKEN_TO_BE_REPLACED
Social media
and networks
Subscribe to our
newsletter