Skip to main content
Letters to a Young Moroccan

The Country of Unrealised Plans

Life is not easy in Morocco. And this was the motivation for writer Abdellah Taïa to ask seventeen other Moroccan writers to write an open letter to their country-folk. These letters have now been published in a book entitled Lettres à un jeune marocain. Kersten Knipp read it 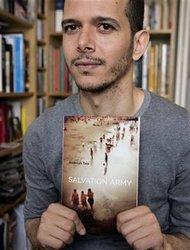 Born 1973 in Morocco, now living in Paris: Abdellah Taïa, the first Moroccan writer to come out as gay

In their form, yes; but their subjects are the same. The grievances are clearly stated, and they are the usual ones: poverty, lack of opportunity, corruption, unemployment and, arising from all this, fundamentalism and the wish to leave the country.

And yet the central motif for many of the writers is something else: the desperation, paralysis and despondency they see afflicting their country-folk. An existential hole opens up, a grey nothingness into which countless life plans fall. The will is there, but the stamina, the tenacity, is lacking. Morocco, many of the letters tell us, is the country of unrealised plans, good intentions come to nothing.

Could it ever be different?

In this country it takes a lot to avoid failing – more than elsewhere. Desires, hopes and talent are there – in excess indeed – but the conditions to make something come of them are seldom there.

Alongside this comes another factor: the dream of success without effort; the dream of a rapid ascent at no cost. Paradoxically it is exactly this dream which ties Moroccans to the rest of the world, which connects them to the cynicism international, to the un-earned celebrities, loudly proclaiming their status yet unable to explain what it is really founded on.

Tahar Ben Jelloun, at sixty-five by far the oldest of the writers assembled here, describes how Morocco too has become infected with the fever of money, with ostentatious wealth, with artifice and pretention. It is a burden which corrupts Moroccans and undermines their principles, he writes.

The illusion of intimacy

What this means, and how to react to it, is the question asked in most authors' contributions. And the answers they provide return the almost forgotten genre of the letter to the function it was once known for: it becomes a medium for exchange, for confidential communication, which does not lose its effect even when it is clear from the outset that this purportedly private correspondence is in fact open to a huge (reading) public. 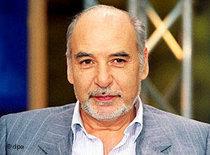 Morocco has become infected with the fever of money, with ostentatious wealth, with artifice and pretention, writes Tahar Ben Jelloun

Maybe this intimate form can only achieve its full effect when the form is in fact re-staged. This illusion of intimacy has a certain logic; the letters allow the confessions to express a genuine feeling of pain.

Hicham Tahir, for instance, born in 1989 and thus the youngest author in the book, addresses someone else's pain in his letter, describing the misfortune experienced by a young person who is unhappy in his country and wants to leave and try his luck elsewhere.

But would he make it anywhere else? Would he bring his life under control anywhere else? This is by no means clear. Why has he not finished his degree, Tahir wants to know. Because a degree doesn't get you anywhere anyway. But can he be certain of that?

Like many of the other writers Tahir notices an escalating fatalism which robs many Moroccans of exactly what they most need; their confidence.

This is precisely what distinguishes the generation of writers collected here, mostly born in the 1970s, from their predecessors: they can clearly see their society's institutional weaknesses. They refuse, however, to use this as an excuse for their own mistakes.

They are too young to have felt the euphoria of independence. Instead they take a sober look at the half-century which has passed since Moroccan independence was achieved, in which Moroccans have had more than enough opportunity to practice the art of repression.

"I revolt immediately, get wound up, go into a rage, when I hear this kind of talk, in which the blame for all the mistakes, the humiliation, all the signs of misfortune is put on others," writes the journalist Sanaa Elaji. "The USA, Israel, family problems, the government, poverty, ignorance, illiteracy, alcohol: the list is huge. I find it extraordinary how many people in this country believe the US is obsessed with destroying our values."

Such words are not easy to express, not even in a letter; because of an article published in the satirical magazine Nichane on jokes about religion currently spreading like wildfire, Elaji and the magazine's editor Driss Ksikes were given a three-year suspended sentence. 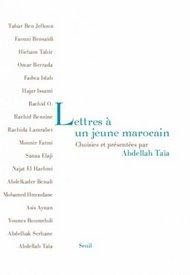 Lettres à un jeune marocain was distributed free with the Moroccan news magazine Tel Quel in a print run of 50,000 at the beginning of August

It is this kind of situation which Abdellah Taïa, the collection's editor, seeks to do something about. Two years ago he became the first writer in his country to come out as gay, unleashing an enormous debate on the subject in Morocco. And now comes the collection of letters.

In his own letter Taïa talks about his father, a man without roots; he was not the man he believed himself to be, his brother once told him. Their father was the result of an extra-marital relationship between his mother, Taïa's grandmother, and another man, but he was still allowed to use the name Taïa. Truth or fiction? This has never been established. But the suspicion remained and the father was hurt by it, right up to his death in 1996.

Some of the other writers also describe uprooting. Rachida Lamrabet, who lives in Belgium writes of the cult of manliness among young Moroccan men there, the desperate attempt to get their life together in a foreign country.

The artist Mounir Fatmi describes the poverty of his early years and his determination to overcome it.

Abdelhak Serhane makes an ironic investigation into the advantages of the politician's life.

The journalist Younès Boumhedi exhorts his generation not to leave the country; they, the younger generation, are needed urgently. Never let it make you despair, the authors tell us. Never despair about anything, even when, or exactly when, things are not easy.

END_OF_DOCUMENT_TOKEN_TO_BE_REPLACED
Social media
and networks
Subscribe to our
newsletter