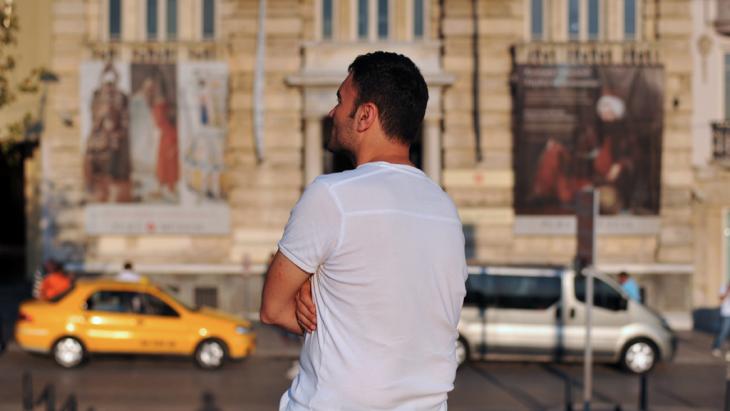 While it is a well-known fact that LGBT people face discrimination and violence in Muslim and Arab countries, it is not quite as well known that LGBT people seeking asylum in the West also face considerable difficulties and in some cases gross insensitivity. Some of those who have been granted asylum are now using the Internet to try and foster tolerance in their native countries. By Joseph Mayton

Ashraf is trendy. By any definition, he is a hipster. He might be all smiles today, but as he waits for asylum in the United States, life for this Libyan national is, at best, difficult. Ashraf is gay.

"I have been waiting for over a year now, and trying to figure out my life and my future is hard," he tells Qantara.de over coffee within a stone's throw of San Francisco's Mission Dolores Park, a favourite location for the LGBT community and others who enjoy sun-filled afternoons on the green slopes in the centre of the city.

For Ashraf, leaving Libya behind was hard enough, but now he faces a new challenge and one that will likely shape the rest of his life. At 33, he knows that getting asylum in the US would be a huge boost to his opportunities. Right now, he doesn't work; he is waiting for official documentation and a Green Card for permanent residency.

Asylum applications up in the US

In 2011, the US received 74,000 applications for asylum, up from 49,000 in 2008. While specific cases for sexual asylum are not noted in the official statistics, the same year, President Barack Obama ordered overseas federal agencies to provide asylum to LGBT individuals in places where they face discrimination and violence.

However, many US states still have laws against homosexual behaviour and acts, including sodomy, making an asylum case based on such acts much more difficult. The first sexual asylum case in the US was back in 1994. Since then, more and more immigrants have sought safety and freedom in America from homosexual persecution in their home countries. Even though these cases are obviously difficult to file, argue and even win, the number of applicants has slowly been rising. 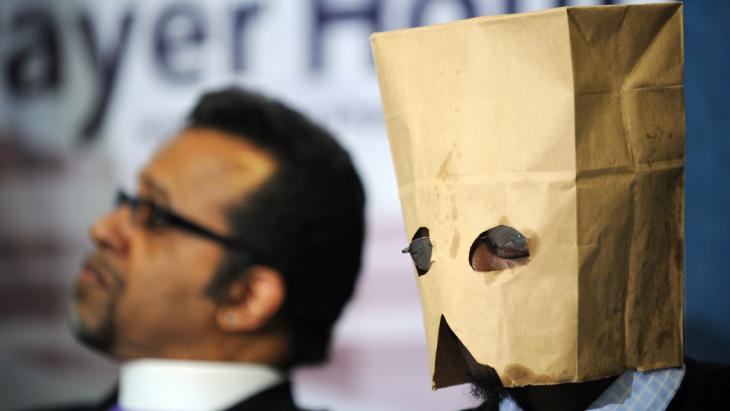 Moses (right), a gay Ugandan man seeking asylum in the United States, hides his face with a makeshift hood as he attends a press conference in Washington DC, February 2010. The press conference was organised to announce the formation of 'The American Prayer Hour,' a multi-city event to 'affirm inclusive values and call on all nations, including Uganda, to decriminalise the lives of gay, lesbian, bisexual and transgender people.'

Assem el-Tawdi faced widespread discrimination in his native Egypt before he fled to the United States a decade ago. He was on the now infamous Queen Boat during the police raid on a gay gathering in Cairo on 11 May 2001, when over 50 people were arrested. During the crackdown, 23 people were charged with defamation of Islam and were reportedly tortured and raped while detained by police. Some partygoers were sentenced to five years in prison with hard labour.

Fearing for his life, Tawdi fled Egypt and sought asylum in the United States. He applied, and after proving his homosexual identity, was given asylum in the US. He now lives in San Francisco. "Right now, the majority of people in the Arab world are not willing to tolerate our existence, and that has to change. That is what I am trying to do," he said recently.

To prove homosexual identity, asylum applicants must prove to immigration courts that they have claims "founded on persecution based on sexual identity" according to Migrationinformation.org. Essentially, this means that someone like Tawdi has to prove that his or her identity was the cause of persecution in his or her home country as opposed to homosexual acts, which are criminalised in some American states.

Tawdi is the founder of Arabs4tolerance, a website that seeks to advance understanding and tolerance of all walks of life in the Arab world. While he knows it is a difficult challenge, battling for his freedom and his LGBT community is close to his heart. "There is definitely a 'silent' revolution going on. LGBT Arabs across the Arab world and beyond are connecting with each other," he said.

And it's not just the United States that is feeling the heat from the global LGBT community. In the United Kingdom, reports on these struggles have become more commonplace in newspapers and on television, showing that leaving discrimination and fear of death behind in one's native country is an arduous and difficult process. 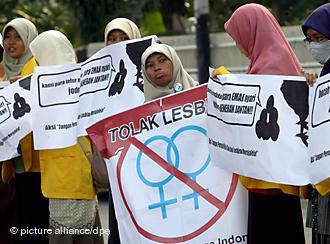 No tolerance at home: in 2010, dozens of Muslim students staged protests outside German cultural centres (including one, pictured here, outside the Goethe-Institut in Jakarta) demanding that the showing of gay and lesbian movies at the Q! Film Festival be banned

For Shrouk al-Attar, being gay meant she was living in sin. As a student in Egypt, Attar learned about the story of Gomorrah, the biblical town God destroyed because the residents were homosexual. It was her first insight into what homosexuality was and how she would be seen in Egyptian society. "My first insight into who I am was that I am a sin, inside and out, and that I'm better dead than alive," she said last year after she was given asylum in Britain.

Attar's journey to asylum in Britain began nearly eight years ago, when she and her parents moved to England. While her family was applying for permanent residency – they had been living in the UK temporarily – it became a drawn-out process and one that threatened their ability to remain in the country if turned down. Then Attar was advised to claim asylum in her own right and launched a case separate from her family. Her family was deported unexpectedly last year, but she was given the right to remain in the UK while her case was being heard.

"My mother had an ongoing asylum claim based on domestic violence. I did not understand the system then and just assumed that the UK [Border Agency] is fair and would let us stay here. So I came out to my friends, not [my] family, without considering the dangers of doing so if [I] returned to Egypt," she admitted.

From the safety of Britain, Attar says she started an online LGBT activism community and joined secret online Egyptian groups as well as public ones demanding greater LGBT rights in the Middle East, "or just a place where people could find like-minded others." She was then approached by an Egyptian atheist blogger who goes by the name BenBaz about writing on her situation and LGBT rights in the Arab world.

"We worked together on that and predictably, the online abuse and death threats increased. I did not realise how big that article would become, but within hours, my sister – who was blocked from all my social-networking accounts – found out about it and showed my mother. Needless to say, the house was in uproar that day and I was forced to leave," she said about her family’s discovery of her homosexuality.

Thanks to her individual case, Attar was allowed to remain in the UK until she was finally granted asylum in May. But for many gay immigrants, seeking sexual asylum in the UK is not an easy task. While only ten years ago, the process was fairly straightforward and the vast majority of applicants were granted asylum, today that has changed dramatically. 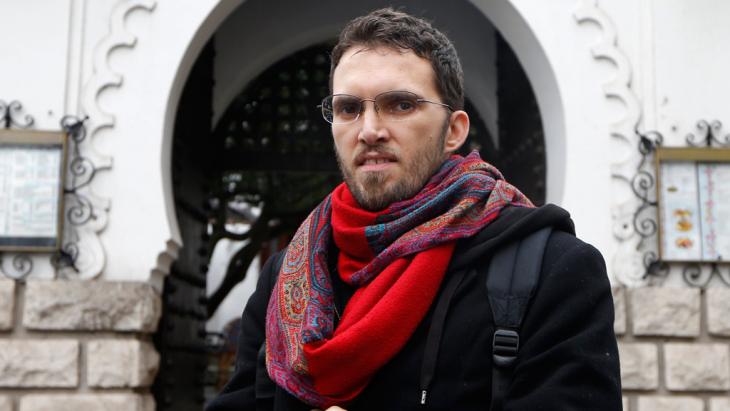 Ludovic-Mohamed Zahed, a French-Algerian homosexual Muslim, poses outside Europe's first gay- and lesbian-friendly mosque in Paris. Zahed is head of the "Homosexual Muslims of France" association, the initiative behind the mosque, which welcomes transgender and transsexual Muslims to Friday prayers

Immigration authorities have found themselves in the middle of controversies over asking "sexually explicit" questions to men and women applying for asylum based on sexual identity. Researchers have also begun to reveal what many LGBT activists have described as the "horrors" of the asylum process. For example, gay men have had to make sex tapes to prove they are gay, while women have been asked by immigration judges whether or not they use sex toys.

One of the leading researchers on the topic, Claire Bennett from the University of Southampton, who has conducted interviews with 12 lesbians from socially conservative countries including Saudi Arabia, Jamaica and Uganda, knows the process well.

She uncovered what she described as "inappropriate and insensitive" probing by judges in their assessment of whether an asylum claim was genuine or if they were at risk of persecution in their home country. Among the questions she said were asked included "Have you ever read Oscar Wilde?", "Do you use sex toys?," and "Why have you not attended a Pride March?" What’s more, judges have been known to argue that a claimant "doesn’t look lesbian", says Bennett.

Abortions are illegal in Egypt unless they are necessary to save a married woman's life. But that doesn't stop local women from having one. Egyptian society needs to acknowledge ... END_OF_DOCUMENT_TOKEN_TO_BE_REPLACED

Food prices doubled, salaries halved, banks restricting withdrawals: Egyptians now have the same problems as the Lebanese. But if things get worse here, the fallout will be far ... END_OF_DOCUMENT_TOKEN_TO_BE_REPLACED

Giessen, Eichsfeld, Kusel, Berlin – cars bearing old German number plates are the latest trend on the streets of Cairo. Many Egyptians regard the discarded plates as chic. What ... END_OF_DOCUMENT_TOKEN_TO_BE_REPLACED

Egyptian Sufis have been on the defensive against the country's Islamists for decades. Meanwhile, interest in mysticism is growing among the young members of Cairo’s middle and ... END_OF_DOCUMENT_TOKEN_TO_BE_REPLACED

Chinese President Xi Jinping's visit to Saudi Arabia in December 2022 may have rattled Washington, but it simply highlighted the Arabs’ desire to diversify their foreign relations ... END_OF_DOCUMENT_TOKEN_TO_BE_REPLACED

END_OF_DOCUMENT_TOKEN_TO_BE_REPLACED
Social media
and networks
Subscribe to our
newsletter