A Counter-Movement to Political Islam

In recent years Indonesia has seen the development of a network of various Muslim NGOs that convey a contemporary understanding of Islam, working to counter the advance of Islamization. Arian Fariborz reports

In recent years Indonesia has seen the development of a network of various Muslim NGOs that convey a contemporary understanding of Islam, working to counter the advance of Islamization. 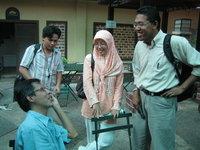 For a modern understanding of Islam: Liberal Islam Network activists in Jakarta, Indonesia

​​The island state of Indonesia has always been regarded as a prime example of tolerance in action, where ethnic groups and different religious communities coexist peacefully.

"Unity in diversity" is the self-image of the secular state based on the so-called "Pancasila" philosophy which attempts to integrate different religions such as Islam, Buddhism and Hinduism, as well as different languages and cultures.

However, amidst social problems that have been on the rise since the 1990s and are often stylized into religious conflicts, violent attacks on minorities have increased, and radical Islamic splinter groups threaten the country's social peace.

The end of the Suharto dictatorship and the beginning of the so-called "Reformasi" era in the late 1990s did bring tangible democratization to Indonesia's state and society. However, those who profited from the new freedoms included not only liberal parties and civil society actors committed to tolerance and democracy, but also proponents of radical Islam.

Today political Islam is gaining ground in Indonesia. Groups such as the Islamic Defenders Front (FPI) and the Prosperous Justice Party (PKS) preach a conservative, one-sided image of Islam. They demand the country-wide introduction of the Islamic penal code and crusade against everything in society they consider decadent and immoral.

The battle for public opinion

To offer a counterbalance to radical Islam in the world's most populous Muslim country, numerous liberal Muslim groups have been founded, such as the "Liberal Islam Network" (Jaringan Islam Liberal), which was established in 2001 in the capital of Jakarta. 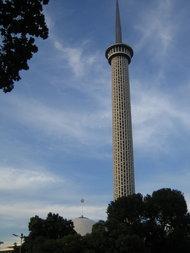 The minaret of Jakarta's Istiqlal Mosque, or Independence Mosque. The edifice is the largest mosque in the largest Muslim nation - and in all of Southeast Asia

​​The organization's stated goal is to encourage dialogue among Islamic groups with a liberal understanding of Islam and to create a journalistic platform for analysis, background reports and interviews. "We also conduct workshops, public discussions and radio talk shows to discuss the current challenges for Muslim society following the end of the Suharto era," explains Luthfi Assyaukanie, coordinator of Jaringan Islam Liberal.

The Islamic scholar and lecturer at the Paramadina University in Jakarta knows exactly what he is talking about when he emphasizes the significance of his organization's educational and publicity work: "We are now living in a democratic society. However, if we do not enrich it with our views, the radicals will try to fill this gap. We see ourselves as a reply to the rising Islamism in Indonesia."

Luthfi Assyaukanie's "Liberal Islam Network" is a small movement dominated by young journalists and Islamic scholars. They are committed to inter-religious dialogue and to maintaining the secularism and pluralism of Indonesian society.

The group emphatically rejects the literal interpretation of the Koran and advocates a contemporary Islam that respects freedom of opinion, women's rights and tolerance toward minorities and other religious communities. 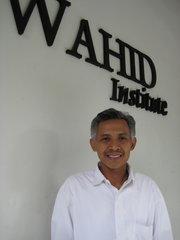 Trying to win over the "silent majority of Muslims": Ahmad Suaedy, Executive Director of the Wahid Institute in Jakarta

​​According to Assyaukanie, the network's activists see themselves as standing in the tradition of the 19th century Islamic reform movement. Their role models are Mohammad 'Abduh, Ali Abdel Razeq and Rashid Rida.

Similarly, for eight years the Indonesian women's rights organization "Rahima" has been taking an Islamic perspective on women's emancipation and fighting for a political voice for women in Indonesian society, among other things.

The organization sees educational work as its primary task, especially in the rural districts of Central Java. "Rahima" cooperates especially closely with teaching staff at Islamic boarding schools, the so-called "pesantren", and at other Islamic Institutions, where they advocate for a modern understanding of Islam.

Educational work on the local level

"When Rahima was founded, the primary goal of our work was to reach the Islamic boarding schools in the country and their directors (Qiay), the second step being to sensitize the teachers at these schools to our issues," explains "Rahima" director Aditiana Dewi Erdani.

At special seminars and training sessions, private lecturers are trained to act as mediators, communicating their liberal conceptions of Islam to students and teachers in the local communities.

This strategy is also shared by other liberal Islamic organizations: for instance, for years "Rahima" has cooperated successfully with the "Wahid Institute", named after the country's former president and probably its best-known Islamic scholar, Abdurrahman Wahid (Gus Dur).

Education and dialogue as the key to success

Founded in 2004, the "Wahid Institute" is another NGO committed to a tolerant, pluralistic Islam and to democratic reforms in Indonesia.

Just like "Rahima", the organization targets Islamic boarding schools (pesantren); forming an independent school system, they are largely free from state control and hence harbor the greatest danger that the advance of Wahhabism will subject students and teachers to Islamist indoctrination, says Ahmad Suaedy, deputy director of the "Wahid Institute":

"We make it easier for the 'silent majority of Muslims', the teachers at the Islamic boarding schools as well as the local leaders, to discuss Islam and peace, Islam and pluralism, and in some regions we enable them to talk together about their difficulties on the radio and in the local media", says Suaedy.

All the groups in the liberal Islamic network share one main approach toward curbing the influence of Islamist hardliners: education and dialogue as the key to mutual understanding in the multiethnic state of Indonesia.

Muslim Feminists in Indonesia
The Queens of Islam
Rahima is a Muslim organization that advocates women's equality based on modern and democratic ideas. Instead of traveling from conference to conference, Rahima members prefer to work at the grassroots level. A portrait by Christina Schott

Syncretism in Indonesia
Where Islam Mixes with Old Rituals
Many Indonesian Muslims still practice a rather syncretistic mix of beliefs, combining Islam with other cultural and religious traditions. They are often criticized by Muslim purists for their eclecticism. Christina Schott reports

Indonesia
Symbol of Defiance or Symbol of Loyalty?
In Indonesia, the headscarf has gained popularity since the 1980s, but although Indonesia is the world's largest Muslim nation, it is the political sphere that largely defines the meaning of the "jilbab" ("hijab"). Lies Marcoes-Natsir reports