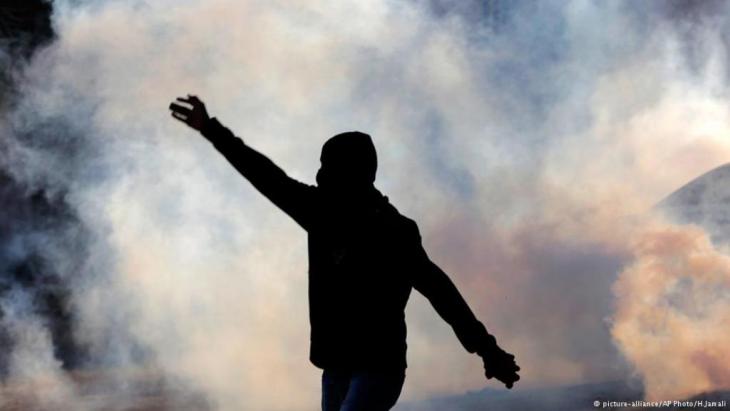 Liberalism in the Arab world

Arab liberal thinkers are seemingly unable to come up with realistic solutions to the ongoing socio-political crises and armed conflicts in the Arab world. An essay by the Lebanese journalist and writer Karam Hilou

Public opinion across the Islamic world is unanimous: since the 1990s, the Arabs have been experiencing what is possibly the worst crisis in their history, a crisis you could liken to the Biblical trials of Job. Top of the list is Iraq: between 1990 and 2015, it fell victim to US occupation, degenerating into a failed state over which violent groups are now fighting. It is very hard to imagine how the various denominational, religious and ethnic components of this country will ever unite again under one flag in a nation state that is no longer subject to foreign interests.

But this was not the only Arab crisis between 1990 and 2015. The southern part of Sudan also seceded from the North; to this day, civil war still rages in parts of the country. Somalia also collapsed and has been disintegrating as a nation state ever since. For its part, Libya is now nothing but a minefield of warring tribes from whose coast migrants set sail on overcrowded boats in an attempt to escape this hell.

In this age of conflict, Syria too has descended into a destructive civil war. Wracked by terror, the country looks set to sink in the misery of its own quagmire, shattering into smithereens in a manner reminiscent of Somalia and dissolving into regional and international spheres of influence, held by foreign rulers who couldn't care less about the national interests of the Syrian people and their ambitions.

Yemen is yet another victim of the tug-of-war in the region: the institutions of this nation state are in the process of disintegrating, which has left Yemen a battlefield on which foreign proxy wars are being fought. This is driving the different parts of this already divided country even further apart and exacerbating the already immeasurable suffering of the Yemeni people.

Even Lebanon has been gripped by a profound crisis: the country is sinking deeper and deeper under the weight of towering debt and groaning beneath the pressure of a burgeoning rubbish crisis. Until very recently, the election of a new president seemed completely impossible. In Egypt, meanwhile, the Al-Sisi regime has been whipped up into such hysteria by the omnipresent spectre of terrorism and firebrand militant Salafist ideology, that it no longer knows how to feed its massive population.

The colossal failure of the ruling elites

In view of all these trouble spots, it is not surprising that any attempt at development in the Arab world continues to be doomed to failure. Here, poverty, illiteracy and the inability to invest in productivity and education in order to keep pace with the modern age stubbornly refuse to go away, while elsewhere, courageous steps are taken to forge new paths in science and technology. 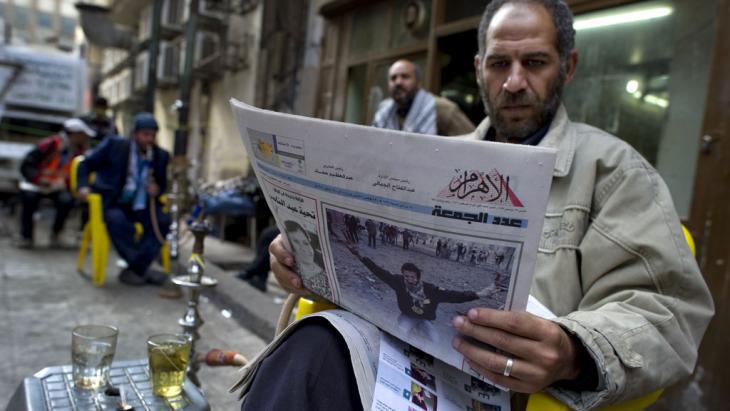 "The biggest failing on the part of Arab liberals is that they insist on addressing an audience that subscribes to an entirely anti-liberal way of thinking and absolutely rejects this discourse. It makes no sense for the liberal forces to denounce the backwardness and the decline of the Arab peoples, while at the same time trying to win over the uneducated, impoverished masses that have been fired up by fundamentalism to such principles and values," writes Karam Hilou

So how do the ambassadors of Arab liberalism react to all this? Disappointed, confused and impotent, they watch this multiple tragedy play out and blame the advance of radical fundamentalist rhetoric and reality-distorting myths on a lack of tolerance and willingness to engage in dialogue and mutual respect.

They lament failed reforms, the widening of the gulf between rich and poor, the dissolution of societal bonds and the resurgence of tribalism, while bemoaning the lack of serious efforts by the nation state and the decline and fall of their culture and civil societies.

Arab secularists discuss the authoritarian behaviour of the state and the way it pokes its nose into everything and anything, its complete subsummation of society, the conscious withdrawal of freedoms and the renunciation of the concept of the common good. They drone on about the advance of terrorist movements and their obscure ideology, complaining that this ideology is increasingly influencing the way the general public thinks now that the state is no longer showing an interest and the masses have been left entirely to their own devices.

Elitist and out of touch with reality

Today, Arab liberals philosophise about all these factors from their supposedly cosy position as the representatives of their countries' elites, who do not want to have anything to do with the common people. In doing so, they behave as if they were distinct from society and politics, removed from the problems and the crises in their countries. But they are not.

The liberal elites prefer to drone on about fighting corruption, putting an end to the senseless waste of public money and distributing resources fairly. They point to the importance of values such as rationality, tolerance, dialogue and proportionality and consider the co-operation between state and civil society to be imperative for the implementation of these tasks. 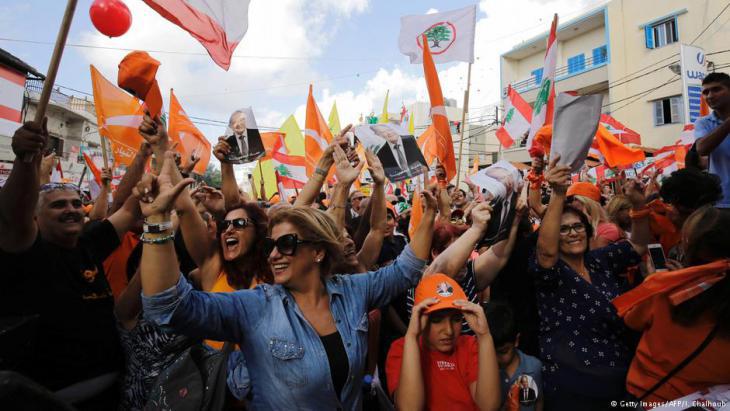 Post-election euphoria: after nearly two and a half years without a president, Lebanon now has a new head of state: Michel Aoun. In a fourth round of elections the ex-general was voted in as president by the parliament at the end of October. Although the 81-year-old Maronite Christian is an ally of the powerful Shia militia Hezbollah, he also received the support of Lebanon′s former prime minister Saad Hariri, a Sunni by conviction. In return Aoun has since named Hariri head of his new government

They are particularly focused on the drafting of an education policy that incorporates all these values and principles and a comprehensive cultural programme of information that will firmly anchor such values and principles in society. The liberals are convinced that it is the intellectuals and educated classes who must be at the forefront of disseminating these approaches. They, say the liberals, are obliged to assume this educational role because they ′develop and pass on thought′ and because culture is the only means to fight all ′reactionary and fundamentalist thought′ – a view that must, they feel, be shared by the religious scholars and the media too.

Such utopian recommendations, which are completely out of touch with reality, are also made by the authors of the recently published work ″Between Salafism and reactionary, excluding terrorism: an interpretation of ideas″ by the Centre for Studies on Arab Unity. This work is typical of the weaknesses in the liberal discourse in the Arab world.

However, quite apart from these weaknesses, the biggest failing on the part of Arab liberals is that they insist on addressing an audience that subscribes to an entirely anti-liberal way of thinking and absolutely rejects this discourse. It makes no sense for the liberal forces to denounce the backwardness and the decline of the Arab peoples, while at the same time trying to win over the uneducated, impoverished masses that have been fired up by fundamentalism to principles and values that have not even fully taken root across Western societies, where liberal traditions run much deeper.

Western liberalism has at least managed to take root in all those European societies that long ago abandoned superstitious, regressive thought and progressed through the industrial revolution. Marxism spoke to the impoverished proletariat, which had nothing more to lose.

As a result, both ideologies were able to win over huge numbers of people to their respective political outlook and values. These people became disciples, who then adopted these ideas and developed them. Arab liberalism, on the other hand, seems strangely homeless, rootless, stunted in its historical growth and without prospects of any kind. And this, in essence, is its real failure.

Home
Print
Newsletter
More on this topic
Social fabric and solidarity in the Arab world: The indifference of the Arab middle classnterview with Rami G. Khouri: Fragmentation of the Arab world Political transformation in the Arab world: Forget the people
Related Topics
Arab Spring, Arabellion, Democracy and civil society, Human rights, Rule of law, Secularism in the Islamic world
All Topics

Lebanon is suffering from the worst economic crisis in its history, which has led to a dramatic shortage of supplies. Electricity and petrol are hard to come by. ... END_OF_DOCUMENT_TOKEN_TO_BE_REPLACED

Lebanese cartoonist Bernard Hage has made a name for himself in a very short space of time, both at home and abroad. Now he sees no future for himself in Lebanon, and is about to ... END_OF_DOCUMENT_TOKEN_TO_BE_REPLACED

A new survey by Arab Barometer adds numbers to the narrative that COVID has led to a harsher reality for women in the Middle East and North Africa. By Jennifer Holleis and Razan ... END_OF_DOCUMENT_TOKEN_TO_BE_REPLACED

The young activists from the Minteshreen movement want to provide an alternative to the political corruption of the elites. For them, the state is more important than religion. By ... END_OF_DOCUMENT_TOKEN_TO_BE_REPLACED

They’ve already got the Louvre; they’ll soon have a Guggenheim Museum as well – and now the Emirates have added literature to their quest for cultural supremacy in the Arab world ... END_OF_DOCUMENT_TOKEN_TO_BE_REPLACED

END_OF_DOCUMENT_TOKEN_TO_BE_REPLACED
Social media
and networks
Subscribe to our
newsletter