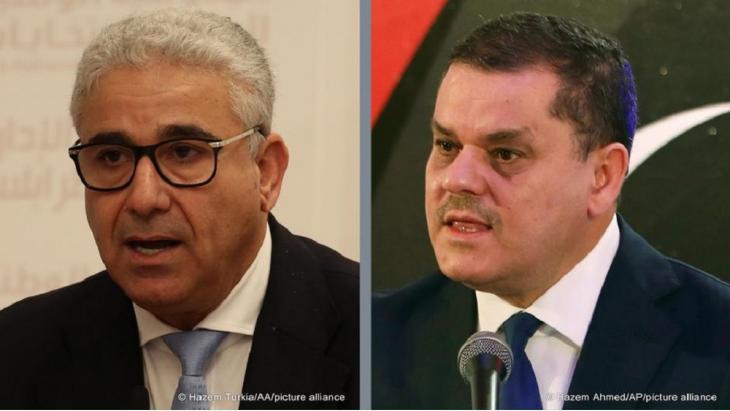 Libya and the Ukraine conflict
The ever-present threat of war

A ceasefire has been in effect in Libya for the past year and a half. Yet after Russia's attack on Ukraine, another proxy war looms in Africa's most oil-rich country. Mirco Keilberth reports from Tunis

The situation in Libya is growing more unstable by the minute – a side-effect of the Russian attack on  Ukraine. "We Libyans are soon likely to once more be spectators to a proxy war waged on our turf," says analyst Younis Issa. The former minister of culture in the Tripoli regime until 2014 witnessed last week just how fragile the ceasefire has become.

"First, fighting broke out on the border with Chad, between parties vying for control of the gold-mining towns in the Sahara," says Issa, who lives in the region. Then a detachment under Field Marshal Khalifa Haftar, leader of the "Libyan National Arab Army" (LNA), along with unknown foreign soldiers, entered Qatrun to arrest a supporter of the Islamic State. The United Nations Observer Mission dispatched to the area is rarely deployed and knows little about what is going on, laments Issa.

A ceasefire has been in force in Libya for the past year and a half. Yet after the Russian attack on Ukraine, the proxy war between Turkey and its Western partners on one side and Russia on the other is threatening to flare up again. Europe is intent on taking advantage of Africa's largest oil reserves, while Moscow suffices itself with blockading them.

For 18 months, Field Marshal Khalifa Haftar attempted to seize power in Tripoli, a city of two million people. In the summer of 2019, his troops came within eight kilometres of the official residence of then Prime Minister Fayez al-Sarraj. But the prime minister had called on Turkish President Recep Tayyip Erdogan for military assistance.

Haftar's army eventually fled before the Turkish Bayraktar drones, back to eastern Libya. Fighting alongside Haftar at the time were more than 2,000 mercenaries from the Kremlin-affiliated Russian paramilitary organisation Wagner, equipped with state-of-the-art MiG-29 fighter jets and laser-guided artillery. Libyan military experts believe that the battle for Tripoli was a kind of dress rehearsal for Wagner mercenaries in the lead-up to the current attacks on Ukrainian cities.

Following a Russian-Turkish ceasefire agreed in June 2020 and signed a few months later, over 300,000 displaced persons were able to return to the bombed-out south of Tripoli. The end of bloodshed brought lucrative contracts and Libyan oil to the two powers backing the parties at war in Libya.

Russia holds sway in the east; the EU, USA and Turkey support the west

Since then, Africa's most oil-rich country has been divided into an eastern and a western sphere of influence. The Cyrenaika province on the border with Egypt is the source of the majority of Libya's high-grade oil, and Moscow now holds sway there. It is in fact only thanks to the Wagner mercenaries that Haftar is able to maintain his grip on eastern Libya and currently advance once more into the western and southern parts of the country. Washington, Brussels and NATO member Turkey are backing Abdul Hamid Dbeibah, the popular head of government in western Libya.

Another supply headache for #oil markets. #Libya's production is down to just 100k bpd (a tenth of 2021 output) as political protesters shut ports. Traders are already paying more for North Sea crude, which is similar in quality to Libyan oil. https://t.co/VV0fiJmvAy @S_Elwardany pic.twitter.com/6i3ZiNbLS9

Meanwhile, Haftar is trying to take advantage of the power vacuum in Libya to expand his pull through new tribal alliances. And more and more mayors and militias in the southern Fezzan province are joining him, as a militia commander from Qatrun confirmed to the Suddeutsche Zeitung by phone. At the same time, the Russian-East Libyan alliance is putting its military adversaries, the Turkish army and the militia cartel of western Libya, to the test.

At dawn on 17 May, for example, a long convoy of armed pickup trucks arrived in the Tripoli suburb of Tajoura. The capital was apparently still asleep. In one of the vehicles sat Fathi Bashagha, a businessman and politician from the port city of Misrata. The 59-year-old was elected by the Libyan parliament as the new head of government in January. But his rival Abdul Hamid Dbeibah still resides in the government building on Tric Al Sikka Street in Tripoli.  And the multimillionaire has no thought of leaving, even though his mandate expired back in December. Dbeibah was actually only supposed to prepare the ground for the parliamentary and presidential elections scheduled for last December and then step down.

But when Khalifa Haftar declared his candidacy, along with Muammar al-Gaddafi's son Saif al-Islam and other controversial figures, Dbeibah decided to run as well, in defiance of a promise he had made when taking the oath of office a year earlier.

Now the militias on both sides of the frontline were seeing red. They feared that the election would put them under the rule of former enemies and thus threatened to storm the polling stations. Two days before the 24 December election date, the head of the electoral authority called off the vote. Abdul Hamid Dbeibah simply remained in office. His popularity stems from lavish financial gifts he has made to engaged couples, pompous media coverage of reconstruction projects and generous payments to the militia cartel in Tripoli. In Benghazi in eastern Libya, by contrast, where Haftar is in charge, people feel forgotten by Tripoli, as they did in the days of Muammar al-Gaddafi.

Moscow backs alliance between Haftar and head of state Bashagha 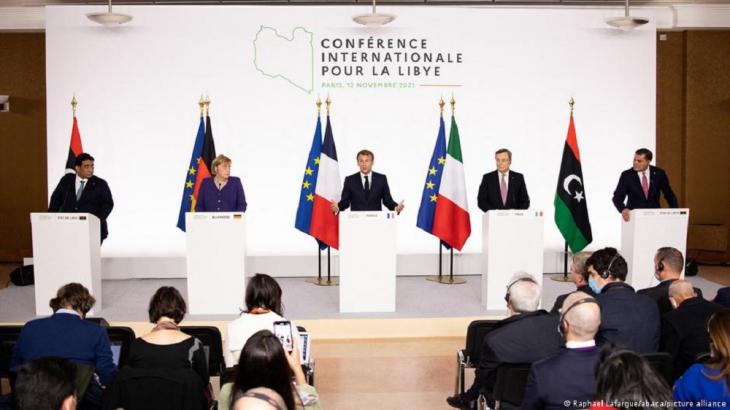 All or nothing in the Libyan civil war: Political observers fear that Libyan self-made field marshal Khalifa Haftar, leader of the "Libyan National Arab Army" (LNA), might try to take power in Tripoli. Haftar is promising the people living in the neglected east and south a fairer distribution of wealth. He is supported by the United Arab Emirates, Russia and Egypt

Haftar promises people living in the neglected east and south a more equitable distribution of wealth. He has formed a strategic alliance with Fathi Bashagha – even though the two hail from the hostile cities of Benghazi and Misrata. They are backed by the United Arab Emirates, Moscow and Cairo, which are doing everything in their power to harm the dreaded Muslim Brotherhood, Haftar's main enemy.

When Bashagha's motorcade passed through the deserted suburb of Tajoura on 17 May, the capital militia opened fire on the "Nawassi" brigade accompanying him. But they deliberately aimed just above the vehicles. Bashagha's men retreated without firing a shot, and now he intends to take up his governing duties in the central Libyan city of Sirte.

Stephanie Williams, the United Nations Special Adviser on Libya, has met with the two competing government leaders several times to urge negotiations. The American diplomat had once helped the multimillionaire Dbeibah into office at a United Nations conference in Geneva.

But Williams and the United Nations Support Mission in Libya (UNSMIL) are likely to have little impact on the current power struggle. Although Williams acts in the capacity of head of UNSMIL, her status is in fact merely that of adviser to UN Secretary-General Antonio Guterres. A Russian veto in the UN Security Council prevented her from being officially appointed as UNSMIL mission chief and thus the post remains vacant.

Iliasse Sdiqui, analyst with the security firm Whispering Bell, believes the parallel government in Sirte will quickly expand its sphere of influence around the capital. "In recent days, militias from groups loyal to Bashagha and Haftar have taken up positions around Tripoli. And the Wagner mercenaries are very active in Sirte itself. But as long as Dbeibah has access to the central bank in Tripoli, he is assured of the support of the militias there. Tripoli cannot be taken by force of arms at this time."

Few of those sitting in Tripoli's cafes anticipate renewed conflict. It was the same back in April 2019, when Antonio Guterres travelled to Tripoli for the first time to announce a peace conference. But while the UN Secretary-General was speaking in front of rolling cameras, Haftar gave the marching orders to capture Tripoli.

"We should not let ourselves be fooled by the current diplomatic and military stalemate," warns former Culture Minister Younis Issa. "Haftar will make a second attempt to take power in Tripoli. If he succeeds, Vladimir Putin would have influence over 2,000 kilometres of Mediterranean coastline. Then Europe will wake up to a second war right on its borders."

Civil War in Libya: What is Russia really up to?

Khalifa Haftar's role in the Libyan civil war: The fight against political Islam

Algeria‘s regime is again cracking down on anti-fracking activists and the unemployed in the country‘s south. Yet EU countries remain keen to scale up their energy cooperation ... END_OF_DOCUMENT_TOKEN_TO_BE_REPLACED

The murder of a female student at Mansoura University in the Nile Delta has sparked a long overdue debate on femicide in Egypt. Karim El-Gawhary reports from Cairo END_OF_DOCUMENT_TOKEN_TO_BE_REPLACED

Syria, Egypt, Saudi Arabia and the UAE are among those countries increasingly misusing cybercrime legislation to silence dissent and curb freedom of speech. Could a new global ... END_OF_DOCUMENT_TOKEN_TO_BE_REPLACED

Egypt hopes to jump-start the action needed to face a warming world when it takes the presidency of major UN climate talks in November, but warns that countries need a "reality ... END_OF_DOCUMENT_TOKEN_TO_BE_REPLACED

It is the biggest order in the history of the Siemens Group: a 2,000-kilometre railway network for high-speed trains is to be built in Egypt. But the project raises numerous ... END_OF_DOCUMENT_TOKEN_TO_BE_REPLACED

Archaeologists have discovered 250 sarcophagi and 150 bronze statues during excavations in the necropolis on the western bank of the Nile. ... END_OF_DOCUMENT_TOKEN_TO_BE_REPLACED
Author:
Mirco Keilberth
Date:
Mail:
Send via mail

END_OF_DOCUMENT_TOKEN_TO_BE_REPLACED
Social media
and networks
Subscribe to our
newsletter