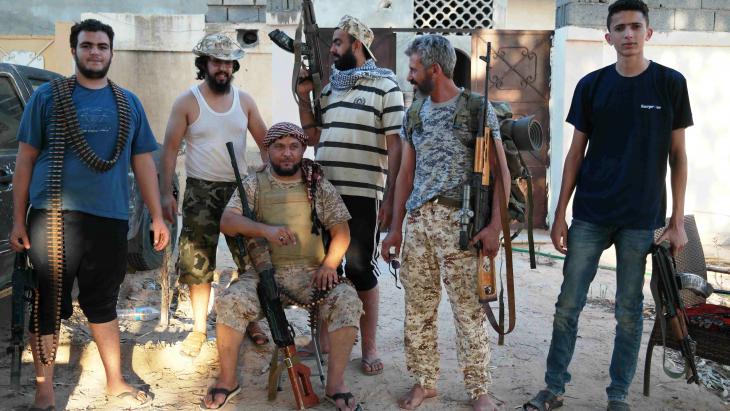 The war against the Islamic State Group is taking a heavy toll on Libya, especially on the youth at the front line, and a military victory is only the first step toward stability, writes Valerie Stocker

"The Daesh fighters believe that their path leads straight to paradise, but I sincerely hope they land in hell." Clad in a light summer shirt and flip-flops, a dusty Kalashnikov in hand, Abdelshafi stands atop the last hill of sand separating his troop from the terrorist group. 150 metres further on, an identical sand mound can be made out, behind which figures are moving.

This is one of several front lines in Sirte, the IS stronghold in central Libya that has been under siege by pro-government troops from western Libya since early May. Behind the troops is the Zaafran roundabout they have already taken, where, during its one-year reign in Sirte, IS hung executed opposition members on billboards as a warning to the population. The 17-year-old Abdelshafi and his comrades, some of them only 15, consider themselves hardened fighters. "We've already fought on other battlefields – we are used to war," they claim, sounding both proud and weary. They see this war as their absolute duty.

"First of all, we're doing the right thing. We must rid our country of Daesh, because they've committed terrible crimes. They're not interested in religion but only in power," says Abdelshafi, adding "and secondly, I'm ready to die a martyr's death." His comrades laugh at the question of whether they are afraid of the future. "What future?" they ask. Their frustration is evident. "What benefit is there in speaking to you?" asks one. "Other foreigners have been here before you but we still aren't getting any support."

"Sirte is their grave!"

Behind the front, troops are ransacking the captured buildings for ammunition and explosives. A fighter drives by, triumphantly brandishing weapons they claim they seized in close combat with IS shooters. "No Daesh terrorist is going to leave this town alive – Sirte is their grave!" he shouts.. 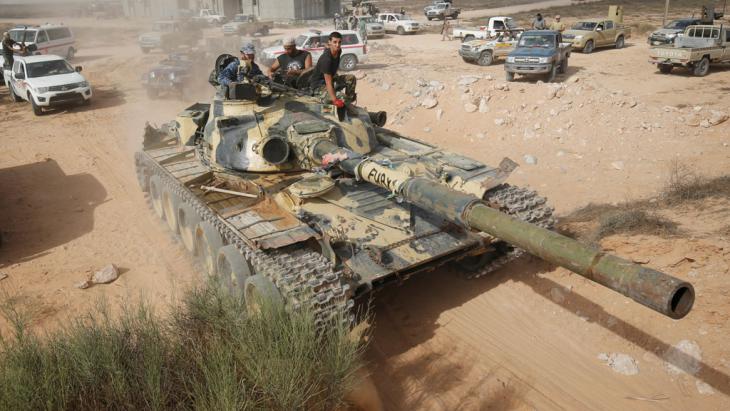 Joining forces against the "hellhounds of IS": The militias consist of former rebels who fought long-time ruler Gaddafi in 2011, before he was detained and killed. In the chaos following the toppling of Gaddafi, the armed rebel groups developed into rival militias whose power struggles continue to dominate the country

Another man displays objects that dead IS fighters were carrying on them, including credit cards issued by a Nigerian bank. It is believed that most IS members in Libya are foreigners – young men of diverse backgrounds whom the terrorist group has lured with brainwashing and generous salaries.

"Every day we take new positions, and Daesh controls no more than a 5km-area in the city centre," says Mohamed al-Ghasri, spokesman for the west Libyan anti-IS coalition Al-Bunyan al-Marsus ("Solid Architecture") in Misrata. The confidence displayed by the coalition leadership conceals just how brutal the war really is. Over 350 Bunyan Marsus members have been killed since May, and some 2,000 injured.

Abdelshafi, too, suffered minor injuries in early July, a few days after we met at the front, when an IS suicide bomber blew up the vehicle he was standing next to. Since then, the secondary school student has been back home in Misrata, studying for his exams. The municipality postponed the tests back in early summer, supposedly to allow the young people to go to war. "As soon as I'm finished, I'm going back to the front," says Abdelshafi. He is worried about a seriously injured friend. "Send me the photos you took of him," he requests. 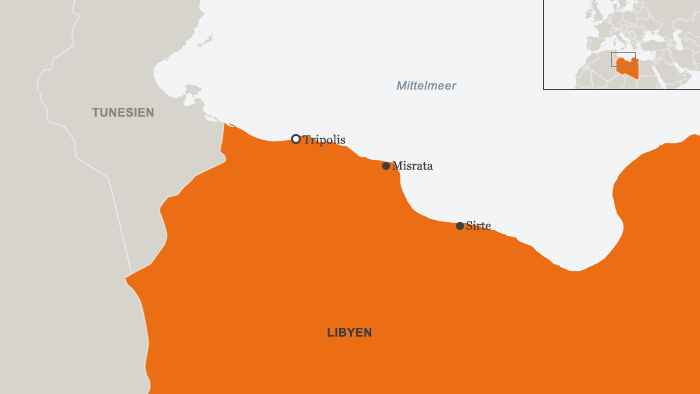 Battle for the IS stronghold of Sirte: The offensive to free the Libyan city of Sirte from the hands of IS began two months ago. But the unity government forces that are gradually recapturing more areas of Sirte are made up of numerous armed militias. They come from several cities in western Libya and primarily from Misrata, which is located 200 kilometres to the east of Tripoli and halfway between Tripoli and the home town of the former Libyan ruler Muammar Gaddafi

Not everyone is in favour of sending minors to the front, but even reluctant parents cannot always hold their sons back. In addition to army members, Bunyan Marsus relies heavily on the participation of civilians, as well as so-called "revolutionaries" who joined brigades either during or after the overthrow of the Gaddafi regime.

As early as the spring of 2015, the parliament in Tripoli at the time dispatched Brigade 166, a revolutionary group steered from Misrata, to Sirte to prevent IS's takeover. But the brigade lacked political and military backing, and by mid-2015 IS had consolidated its power in the town. "In a sense, Brigade 166 handed over the city to Daesh back then," says Ahmed* [his name has been changed] from Sirte. His brigade – Al-Jalet – tried in August 2015 to incite an uprising against IS – in vain. "It was all over in three days and we had to flee the city. We didn't stand a chance," Ahmed remembers.

In the following months, the terrorist group expanded its territory further and further along the coast, often attacking forces from the city of Misrata, 250 km west of Sirte. The turning point came at the end of April 2016, when the army leadership in eastern Libya under General Khalifa Haftar and decision-makers in Misrata, independently from one another launched major offensives against the IS stronghold.

While the east Libyan troops stopped before reaching Sirte due to political tensions with Misrata, the leaders of Bunyan Marsus in Misrata put their operation at the service of the UN-backed unity government in Tripoli. Haftar, for his part, refuses to work with "the government imposed by the West" and its "militias". The UN and other international stakeholders continue trying to bring together the two hostile camps, but despite talks continuing - most recently in Tunis and Cairo in July, there is no breakthrough in sight. 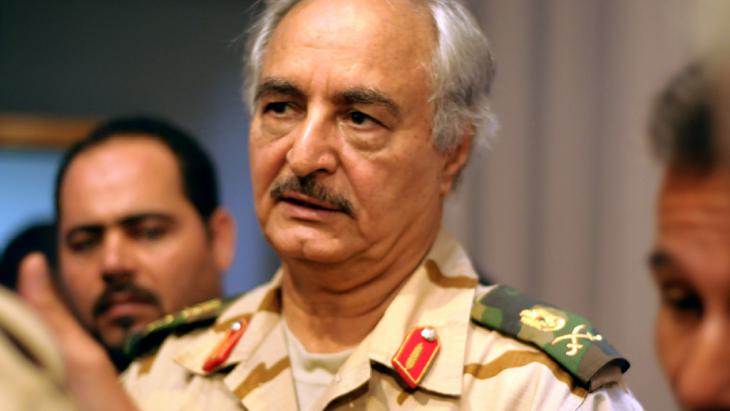 Only interested in his own throne: Many militias are critical of General Khalifa Haftar. Libyan army units that have sworn their loyalty to the unity government are taking part in the Sirte offensive. Other units are remaining loyal to the parallel government based in the east of the country. They are led by General Haftar, whose spokesman has described the unity government and its forces as "illegitimate"

At the front, the scenario of an agreement at the highest level still seems very remote. Many of the west Libyan fighters view General Haftar as a tyrant who is exploiting the fight against extremists and IS to expand his power base in eastern Libya. "Haftar will not join the war in Sirte – he is interested only in the throne," one man comments. Others even accuse Haftar of conspiring with IS. Nor is the West above suspicion. "Why aren't the Americans doing anything? If they wanted to, they could eliminate Daesh in a matter of days. The problem is that the West supports both civil war camps," says Mahmud, a businessman from Misrata who is accompanying the fighters.

As a matter of fact, the USA, the UK and several EU states already sent special units to Misrata as well as Benghazi months ago to help combat IS. The support apparently consists chiefly of logistical assistance and the exchange of data, even though recent audio recordings from Benghazi suggest that air strikes are also being coordinated with Western help. Two weeks ago the killing of three French Special Forces near Benghazi forced France to officially admit its engagement on Haftar's side.

Both civil war camps are demanding modern equipment and weapons, but this is only possible if the UN-sanctions committee grants exemptions from an arms embargo. Due to fears that supplying weapons will exacerbate the civil war, the decision is still up in the air, despite the IS.

Notwithstanding the political impasse, the Bunyan Marsus fighters still hope that a victory over IS will promote greater unity, at least on the regional level. "We need to stick together as Libyans and Muslims. I hope that this war against the Daesh hellhounds will weld us closer together," says Jamal, a military police officer from Tripoli. "Misrata, Zawiya and Zintan [local powers in western Libya] have to keep negotiating until they find a common denominator."

Task for the future: restoring trust

The people of Sirte, which has been deserted by the vast majority, hope above all that the IS occupiers will soon be defeated. "It doesn't really matter to me which side helps us, I just want to see my city liberated," says Ahmed. Leaning more toward the east Libyan army at first, he and a few comrades from the Jalet Brigade have now joined the Bunyan Marsus operation instead. A Salafist group from Sirte is also part of the coalition.

The inclusion of forces from Sirte is important, because relations between that city and Misrata have a troubled past. As Gaddafi's birthplace, power base and last refuge, Sirte was a thorn in the side of the revolutionaries, who disarmed the local tribes after the overthrow in 2011 and imposed their own rules. The resulting power vacuum, and the bitterness of the local population, facilitated the take-over by IS four years later.

Even with good will on all sides, however, it will not be easy to fill the power vacuum and to restore trust, because the municipal administration in Sirte ousted by IS is also politically divided, according to Ahmed. "All of the stakeholders have forfeited their legitimacy and credibility. We have to start all over again."

Arab youth express their hopes and wishes for the New Year, spanning everything from civil and political rights, to education, to arts and culture. By Rafiah Al Talei END_OF_DOCUMENT_TOKEN_TO_BE_REPLACED

Ankara is seeking to improve its relations with several states in the Middle East – such as the United Arab Emirates, Egypt and Israel. There are several reasons for this. ... END_OF_DOCUMENT_TOKEN_TO_BE_REPLACED

Despite Syria's lengthy civil war, dictator Bashar al-Assad is now being courted by many governments in the Middle East as if nothing ever happened. The reasons for this vary. By ... END_OF_DOCUMENT_TOKEN_TO_BE_REPLACED

Racism exists in the Arab world. People with dark skin are discriminated against and often see their rights curtailed. Activists have had enough of such treatment and are starting ... END_OF_DOCUMENT_TOKEN_TO_BE_REPLACED

Unauthorised immigration to Europe went down at the peak of the pandemic. As EU countries re-open, migrant flows are back up. What does it mean for the EU – and for migrants? By ... END_OF_DOCUMENT_TOKEN_TO_BE_REPLACED
Author:
Valerie Stocker
Date:
Mail:
Send via mail

END_OF_DOCUMENT_TOKEN_TO_BE_REPLACED
Social media
and networks
Subscribe to our
newsletter