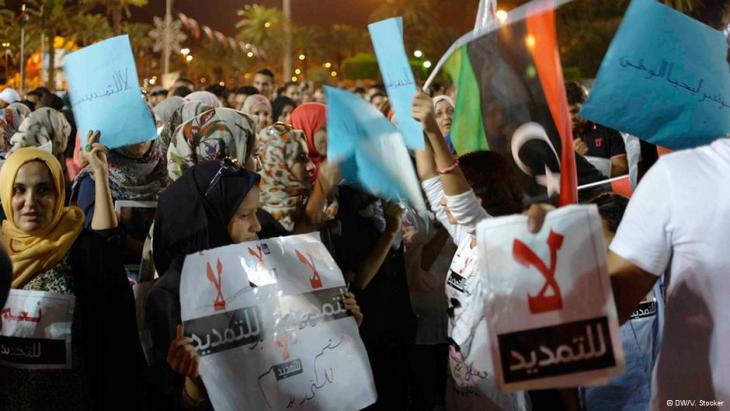 Dozens of protesters were killed and hundreds wounded in militia violence in Tripoli. Public anger is aimed at a weak government. Now, more militia fighters are marching toward the capital to fill a power vacuum. Valerie Stocker reports from Tripoli

Spared from violence for some time, the Libyan capital, Tripoli, has now again become the scene of an increasingly brutal battle for power. A week ago, existing rivalries between armed militias from different parts of the country began escalating. Those militias have been fighting for influence in the capital since the revolution in 2011. On Friday (15.11.2013), dozens of unarmed protesters were killed and at least 450 injured, according to official figures, when they called on troops from the coastal town of Misrata to leave Tripoli.

Militia violence continued into Saturday, when local authorities in Tripoli announced a "three-day general strike in all public and private sectors starting Sunday" in response to the violence.

Prime Minister Ali Zidan, who was briefly abducted by militiamen last month, appealed for "restraint and a halt to the clashes," warning that "the coming hours and days will be decisive for the history of Libya." 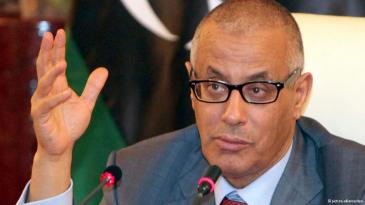 The abduction of Libya's Prime Minister Zeidan, brief though it was, highlights the chaotic nature of the country's slow, arguably stalled transition toward a functional democracy

This week's escalation has its origin in an early November debate in Libya's parliament, where parliamentarians disagreed over the role that should be played by a revolutionary umbrella group comprised of several militias from the city of Misrata, roughly 200 kilometers (120 miles) east of Tripoli.

Parliamentary Chairman Nuri Busahmain decided in August to hand over protection of the capital to the Misrata group of militias. The decision was broadly considered a tactical move to weaken Zidan's government and to strengthen the influence of the Muslim Brotherhood-dominated opposition. Zidan's detainment by members of that operation cell in early October only strengthened that impression.

Zidan's government is shaped by a deep political rift which hinders the demobilization of the various battle groups. Influential local politicians and members of parliament rely on their respective military henchmen rather than the country's institutions to solve problems. Militia members themselves also press for influence.

In addition, rivalries between the armed groups for spheres of influence often escalates into violence. In a recent series of battles, former allies from Misrata and Tripoli suddenly faced off with heavy artillery. Embassies, government buildings and the Radisson Hotel, a first port of call for both diplomats and business travelers, were in the firing line. It was that incident which triggered civil protests in the capital that led to recent violence.

Calls for a new beginning 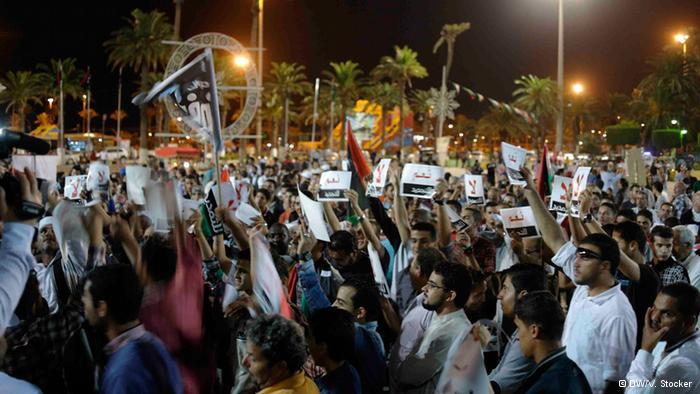 The newly formed democratic alliance: the "Movement of 9th November" called for parliament to resign after the legislative period ends in February 2014, a parliamentary promise made in back in 2011

Popular outrage, however, has targeted not only the brigades, which often continue pursuing their own interests even after they're integrated in the police force and the army, but, increasingly, the country's new leadership.

During a nationwide protest last Saturday (9.11.2013), the newly founded "November 9th movement" called for parliament to resign after the legislative period ends in February 2014, a parliamentary promise made in back in 2011. Since the, members of parliament had announced their desire to extend their mandate. Protest banners reading "No to extension" and "Yes to renewal" decorate the walls everywhere in Tripoli - even in public buildings.

An increasing number of Libyans see the current situation as hopeless. Many believe a comprehensive restructuring of the political system is the only solution. But there's disagreement about the details.

Hatem Abubakr, who coordinates the protests in Tripoli, stressed that he doesn't intend to undermine the legitimacy of the elected institutions by any means. Instead he wants to wake up public officials and speed up the decision-making process by increasing civil pressure.

"The ongoing arguments in parliament also cause a rift in our nation," he told DW. "While the members of parliament use every legal loophole to their advantage, they're dragging their feet in terms of establishing a constitution - and there is no end in sight." 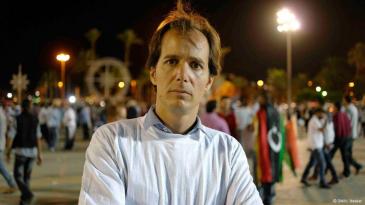 The coordinator of the protests in Tripoli, Hatem Abu Bakr criticizes the policy of the interim government: "The disputes in parliament also split our people"

Positions have become so entrenched that it doesn't look like the tensions in the country will disappear any time soon.

"We are entitled to Tripoli," said Misrata's head of militia Taha Bashaga. "We shall only leave the town in our coffins."

Reinforcement troops from Misrata are said to be on their way.

But even if there ultimately is a ceasefire, it remains unclear who could possibly manage to ease tensions in the country - and get all conflict parties to sit down at the negotiating table.

A ceasefire has been in effect in Libya for the past year and a half. Yet after Russia's attack on Ukraine, another proxy war looms in Africa's most oil-rich country. Mirco ... END_OF_DOCUMENT_TOKEN_TO_BE_REPLACED

Libya's first-ever skate park opened at the end of May in downtown Tripoli to the delight of local youngsters. Built on a site once used by former dictator Muammar Gaddafi's ... END_OF_DOCUMENT_TOKEN_TO_BE_REPLACED

United Arab Emirates strongman Sheikh Mohammed bin Zayed al-Nahyan, who was formally elected president on 14 May, has led a realignment of the Middle East, creating a new anti- ... END_OF_DOCUMENT_TOKEN_TO_BE_REPLACED

Russia's ranking on the World Press Freedom Index has fallen again over the Kremlin's wartime censorship of the Ukraine conflict. From Myanmar to Mexico, journalists continue to ... END_OF_DOCUMENT_TOKEN_TO_BE_REPLACED
Author:
Valerie Stocker
Date:
Mail:
Send via mail

END_OF_DOCUMENT_TOKEN_TO_BE_REPLACED
Social media
and networks
Subscribe to our
newsletter