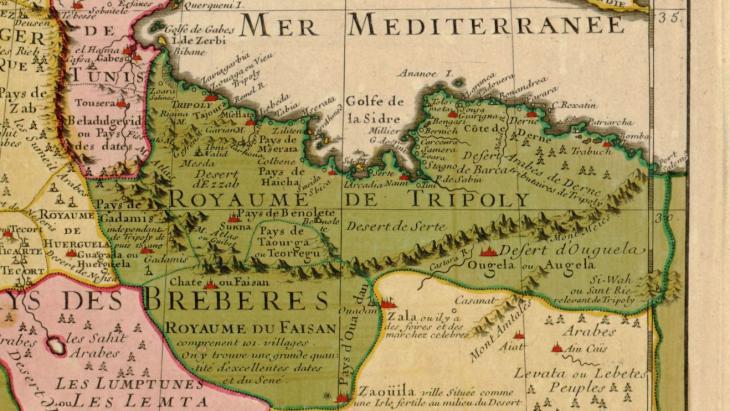 In 1816, a collection of letters written by the sister-in-law of the British Consul in Tripoli was published as Narrative of a Ten Year Residence at Tripoli in Africa. Between 1783 and 1793 Miss Tully wrote over 100 epistles, painting an incredibly vivid picture of life on the Barbary Coast. A review by Sherif Dhaimish

″Previous to entering the Bay of Tripoli, a few miles from the land, the country is rendered picturesque by various tints of beautiful verdure: no object whatever seems to interrupt the evenness of the soil, which is of a light colour, almost white and interspersed with long avenues of trees; for such is the appearance of the numerous palms planted in regular rows and kept in the finest order.″

Consul Richard Tully was a close associate of the reigning Pasha (Bashaw) and lived his life amongst the extravagance of Barbary aristocracy. The Tullys' upheld an intimate relationship with the country′s rulers for many years, which allowed this book to inherently become ″the only exact account which has ever been made publicly known of the private manners and conduct of this African Despot″.

Like all other Westerners who ventured to the Orient, Miss Tully was accustomed to the fundamental differences of life between the two and her letters rather innocently contribute to the epistemological ramification of shaping Europe′s other:

…you live where the traces of ancient customs no longer exist, while here primitive manners are depicted in the deportment and habit of every Moor and Arab with few deviations. 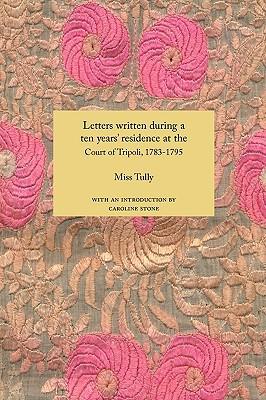 "Rather unobtrusively, her anecdotes are historical artefacts making them all the more attractive for the casual reader and scholars alike. Her insider knowledge of the Consul and Palace allows the narrative to really take shape, particularly when Tripoli is facing a crisis," writes Dhaimish.

Nevertheless she expresses a deep compassion for Tripoli and is as attentive to the cultural traits and quirks as she is fascinated. Tripoli was acknowledged as the ″most civilised″ of the Barbary States, Algiers and Tunis being the other prominent locales. The Moors, Arabs, Berbers, Ottomans, African slaves and a small number of Europeans formed the population, all of whom lived under the rule of Bashaw Karamanli, who was part of an illustrious Ottoman dynasty that spanned from 1711-1835.

Tripoli′s whereabouts meant it was a hub for the slave trade. Caravans from sub-Saharan Africa would arrive after months of travel and ″ship-loads of unfortunate blacks″ would be taken to market from the port, where rich merchants would purchase them for a pittance.

Much to her dismay, Tully wrote about her observations on 30 January 1788 when the ″interesting attachment of two negroes″ caught her attention. She tells of the heart-wrenching ordeal when these two lovers are forced to separate, bringing human status to a crisis that was largely overlooked at the time by most. Despite living amongst the aristocrats of Tripoli, Tully was as attentive to the lower classes as she was to the rulers.

Only a couple of years into her venture, a deadly plague reached Tripoli, which had repercussions for many years after. The disease was spreading like wild fire through the city′s surrounding areas; however, due to the Sahara′s vastness, it would take a number of years to reach Benghazi and Cyrenaica. In the first outbreak in 1785, a quarter of Tripoli′s 14,000 inhabitants were wiped out in just two months. Tully expresses her shock at the incompetence at Moorish medical attention to the sick. European medicine was undergoing rapid advancements as enlightened practitioners operated in newly established hospitals; the Moors, however, continued to use fire as ″one of their chief remedies″ and relied heavily on ritualism.

When a person is thought to be dying, he is immediately surrounded by his friends, who begin to scream in the most hideous manner, to convince him there is no more hope and that he is already reckoned amongst the dead! The noise and horror of this scene cannot but surely serve to hurry the patient, worn down already by sickness, to his last state. If the dying person be in too much pain, (perhaps in a fit), they put a spoonful of honey in his mouth, which in general puts him out of his misery. 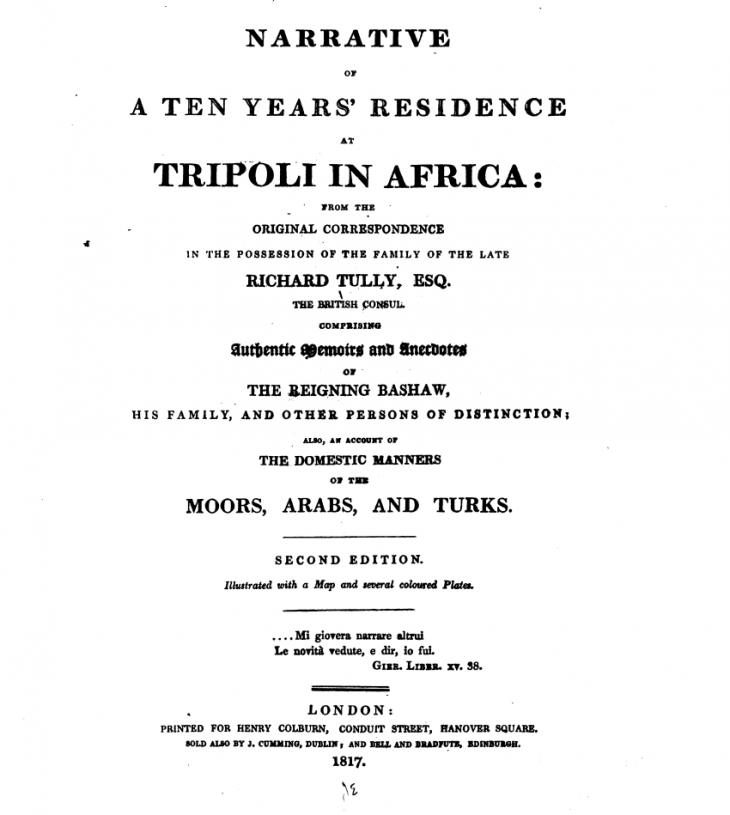 Rather unobtrusively, her anecdotes are historical artefacts making them all the more attractive for the casual reader and scholars alike. Her insider knowledge of the Consul and Palace allows the narrative to really take shape, particularly when Tripoli is facing a crisis. When a Turk named Ali Ben Zool arrives on Tripoli′s shores in 1793 to depose the Bashaw, forcing the royalty into hiding in Tunis, Tully′s letters confide the state of conflict and disarray that sweeps the city.

Ali Ben Zool was still on board and messengers were passing continually from the castle to and from him. At seven in the evening, it was thought quite necessary for us to take advantage of the commodore′s offer and go on board the frigate…

She was referring to Ali Benghul, a Turkish officer who seized Tripoli in 1793. His arrival cast doubt on the future of the land as she leaves the country and settles into Gibraltar. Two years later Yusuf Karamanli returned from Tunis and muscled his way to the throne, continuing the Karamanli dynasty. He proved incapable of filling the boots of successful predecessors – Tripolitania was beginning to crumble and civil war broke out after Yusuf abdicated in 1832.

Unlike many literary accounts of African life from the 18th century, Tully′s Letters was never meant to be published and has never received the widespread critical and popular attention it deserved. What struck me at the end was a recurring theme throughout Libya′s history – those who have been forced to depart its shores tend to leave their heart behind on the Mediterranean coast. ′Sidy Useph′ (Yusuf Karamanli) left an uncanny legacy that the world has become all too familiar within the last five years:

[He] tore the country with intestine broils and laid it open to a series of troubles, which have long rendered it the theatre of murder and desolation; and it is not easy at present to conjecture when its tragedies will end.

You took the words right out of our mouths, Miss Tully.

Home
Print
Newsletter
More on this topic
Libya's rich legacyBook review: ″The New Waw: Saharan Oasis″ by Ibrahim al-Koni: Cultivating the strange "Translating Libya": Non-political stories of love and hardshipLibya: A sanctuary for radicals and militants
Related Topics
History of the Near and Middle East, Literature, Women in the Islamic world
All Topics

The history of Jews and Muslims is far more entangled than you might imagine – but you have to listen out for it. In "Recording History", Christopher Silver takes us on a sonic ... END_OF_DOCUMENT_TOKEN_TO_BE_REPLACED

Welcome to the world of Al Qasar, where Arabic music collides head-on with punk and psychedelic to create something powerful and beautiful. "Who Are We" is a raucous, subversive ... END_OF_DOCUMENT_TOKEN_TO_BE_REPLACED

The southern shores of the Mediterranean Sea are losing sand faster than almost anywhere else. The ecological and economic damage is immense. The good news is, there are ways to ... END_OF_DOCUMENT_TOKEN_TO_BE_REPLACED

To understand Islamic mysticism, we must first clear up a number of misconceptions, as Marian Brehmer writes in his essay – part 1 of a new series on Sufism END_OF_DOCUMENT_TOKEN_TO_BE_REPLACED

END_OF_DOCUMENT_TOKEN_TO_BE_REPLACED
Social media
and networks
Subscribe to our
newsletter