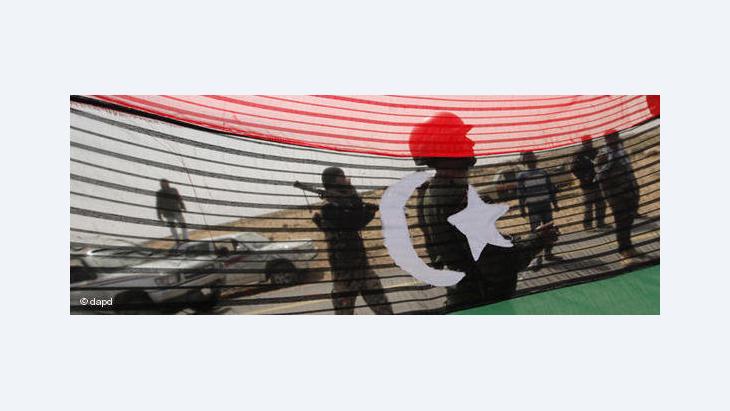 Out of the Frying Pan and into the Fire?

There is unbridled joy at the toppling of Col. Gaddafi – not just in Libya, but also in the West. But who exactly are the men serving on the so-called Transitional Council? And what was the true motivation behind the military action against the Libyan dictator? Werner Ruf comments

The revolutions of Tunisia and Egypt inspired the people of Libya triggering a wave of protest action there too. But unlike in the two afore-mentioned countries, demonstrators in eastern Libya stormed police stations and army barracks on the second day of the uprising, arming themselves for the battle against the regime. A "National Transitional Council" was formed in Benghazi, which was immediately recognised by France and subsequently by around 30 other nations as the "legitimate representation of the Libyan people".

The fact that this legitimacy is founded neither on the results of any elections or any other measurable form of popular support is due to the circumstances, or more specifically: the decisive will of western governments.

Now Libya's foreign assets will be transferred to a council that has found flimsy legitimacy in this manner. This is because Gaddafi had invested a significant portion of oil export revenues in the state-owned Libyan Investment Agency, while kleptocrats Mubarak and Ben Ali had transformed stolen public assets into the private property of their family members. Now the council will be in a position to pay for the weapons supplied by its western friends.

Rebels with a past 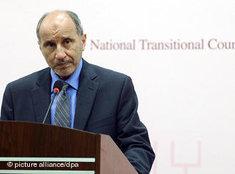 Former prop of the Gaddafi regime: Mustafa Abdel Jalil served as justice minister until February, but resigned when protests in Benghazi were brutally crushed by Gaddafi's henchmen

​​In the pro-revolutionary enthusiasm of the West, it is studiously ignored or simply not mentioned that of the 40-or-so members of this council, only just over a quarter of them are actually known by name. These include Mahmoud Djibril and Ali Tarhouni, two US-educated neo-liberal economists, Mustafa Abdel Jalil, Gaddafi's former justice minister who switched allegiances to the rebel side in February, Ahmed al Senussi, a relative of King Idriss I., ousted by Gaddafi in a 1969 military putsch, and around 10 other individuals.

Just how heterogeneous, indeed just how divided this council is, is not only evident from the fact that it has already undergone a necessary reshuffle, but primarily from the fact that the rebels' commander-in-chief Abdel Fattah Younes was brutally murdered along with three aides by another rebel group. Since then there no longer appears to a common command structure in place, as different groups and militia wage uncoordinated battles against remnants of the army and Gaddafi loyalists in Tripoli.

The West's enthusiasm for the rebels also fails to consider the significance of their red-black-and-green banner, which is that of the old Libya during the rule of King Idriss I.: Idriss was head of the Islamic-conservative Senussi Order, which exerted an influence as far as Senegal and Indonesia in the early 20th century. Following the liberation of Libya from fascist Italian rule, Idriss was installed as King in Benghazi under the influence of the British. It remains to be seen to what extent the choice of this banner is not only indicative of eastern Libyan separatist ambitions, but also perhaps of a restorative-conservative programme of reform.

What is certain is that the unknown members of the Council include die-hard Islamists who formed the core of resistance against Gaddafi over at least the last 30 years. Of the Libyan volunteers drafted to fight first against the Soviet Union in Afghanistan, then against the US and to bolster the Islamic resistance movement in Iraq, they formed the second largest number of recruits after Saudi Arabia.

Western chancelleries must be well aware of all this. And this gives rise to the question of the true aim of this intervention. Gaddafi was not only an eccentric person, he was one of the few Arab heads of state who always insisted that Libya maintain control of oil exports through appropriate investment in oil companies. 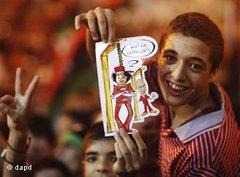 Euphoria after the end of Gaddafi's rule: Yet, according to Werner Ruf, Libya's future looks to be moving towards a dissolution of central statehood and anarchy

​​Following his numerous fruitless attempts to form an alliance between Libya and other Arab states thereby creating a certain counterbalance to the power of the West, he succeeded in building up the African Union – he served as the organisation's first ever chairman – into a system that functioned to a certain degree, with the explicit intention to achieve greater supremacy for African nations and greater control over their commodity wealth.

This was the reason for the passage of Resolution 1973 at the UN Security Council, not human rights violations. If human rights had been the trigger, then the West would have had to impose sanctions on Saudi Arabia a long time ago, or at least denounce the invasion of Bahrain, carried out by Saudi Arabia and the Gulf Cooperation Council in the shadow of the Libyan war – an act aimed at crushing the pro-democracy movement there.

This is why in the "Third World", but primarily in Africa, the 20,000-plus airstrikes launched by the coalition of the willing under NATO command to bomb a path to Tripoli for the rebels, are being seen not as an act of liberation, but as a neo-colonial enterprise.

The battles in and around Tripoli and the mass executions that have apparently begun show that Libya's future looks to be moving towards a dissolution of central statehood in which tribes, secular and Islamic groups fight each other in a state of anarchy.

Whether we are going to see an implosion of statehood, or a disintegration of the country into two or perhaps three states: the reconstruction of Libya's devastated infrastructure and the new regime whose survival is dependent on the support of the West, now at last grants international firms unfettered access to Libyan oil production, and perhaps also throws up the opportunity to divide the only commodity cartel in the "Third World", OPEC.

Werner Ruf is professor emeritus for International Relations at the University of Kassel, Germany.

Political analyst Taqadum al-Khatib argues that Egypt can, in co-ordination with its European partners, develop a common vision to solve the complex conflict in Libya. For this to ... END_OF_DOCUMENT_TOKEN_TO_BE_REPLACED

Libyans have mixed feelings about the EU. On the one hand, they admire what Europeans have achieved, but on the other, they feel let down. Moutaz and Walid Ali report from Tripoli END_OF_DOCUMENT_TOKEN_TO_BE_REPLACED

Libya is in turmoil and no political solution is in sight. The EU's inability to take concerted action in the country, meanwhile, is being exploited by third parties, such as ... END_OF_DOCUMENT_TOKEN_TO_BE_REPLACED

In the wake of the Arab Spring, not one Arab dictator has faced charges for creating a police state and inducing terror among citizens. Similarly, none has been prosecuted for ... END_OF_DOCUMENT_TOKEN_TO_BE_REPLACED

Facing the risk of exploitation, violence and torture, aid groups warn Libya is not a safe country for refugees. They argue that is reason enough for the EU not to send asylum- ... END_OF_DOCUMENT_TOKEN_TO_BE_REPLACED

In their field journal “The Crack” photographer Carlos Spottorno and journalist Guillermo Abril report the unfolding of Europeʹs migrant crisis from Africa to the Arctic over the ... END_OF_DOCUMENT_TOKEN_TO_BE_REPLACED
Date:
Mail:
Send via mail