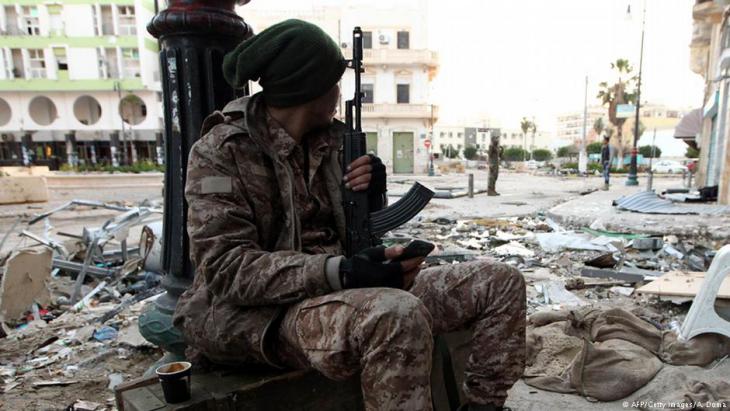 Libya
The Gulf States′ proxy war: Baiting at a distance

Of the civil wars ravaging the Arab world, the one Westerners hear least about may yet prove the most dangerous: Libya. Commentary by Joseph Hammond and Suhaib Kebhaj

The civil war that has been raging in Libya since 2011 is, in many ways, a proxy war pitting Qatar and its Muslim Brotherhood allies against the United Arab Emirates (UAE) and Saudi Arabia.

The Qatari-Emirati rivalry, which became front page news earlier this year when Saudia Arabia and its allies severed diplomatic ties with Qatar, has been the significant factor in the continuation of the current Libyan civil war, much more so than nationalistic or Islamist ideologies.

Qatar and the UAE are both punching above their weight in the conflict because, unlike in Yemen or Syria, the role of the United States or other major powers is somewhat muted.

At stake for both Gulf monarchies is influence in post-war Libya as well as economic opportunity. The country is home to some of the last significant under-explored oil and gas basins in the Middle East. Outside the oil sector Qatar has financial deals with Libya that date back to the Gaddafi era. The Emirates have also sought controlling positions in the Libyan financial sector and were also early investors in the country.

Chaos of the three coalitions

After disputed elections in 2014, Libya has once again descended into chaos with numerous factions. These include Berber militias, IS terrorists, repentant former members of Gaddafi′s military and many other factions. Over the last three years, however, Libyan politics have been defined by three large coalitions, each claiming to be Libya′s legitimate government. 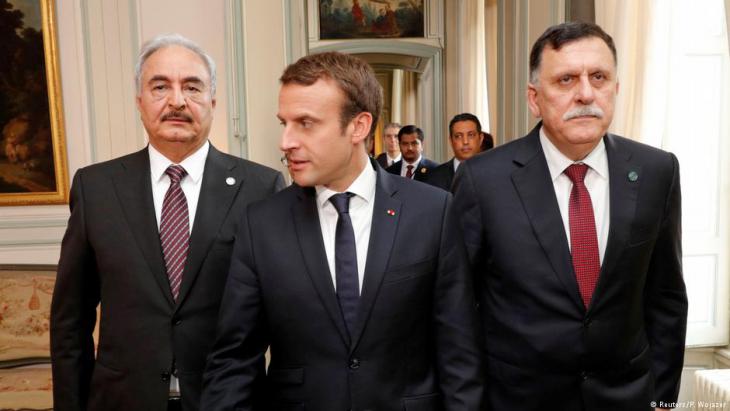 "If Libya fails, the whole region fails with it": Macron′s assessment of the situation is all too accurate. Despite the ceasefire agreement signed between Sarraj and Haftar in Paris in July this year, which reserves armed force "strictly" for use in counter-terrorism operations and foresees elections at the beginning of 2018, how will this latest development be viewed by the rival Gulf states?

The General National Congress is largely Muslim Brotherhood-influenced and is supported by Qatar. Conversely, the UAE along with Saudi Arabia now support General Khalifa Haftar and his Libyan National Army (LNA). The LNA claims to represent Libya′s House of Representatives, a rival government based in Tobruk.

Both of the above factions pay lip service to the Government of National Accord, the body recognised by the United Nations as Libya′s legitimate government. Yet both sides also have other allies too. Egypt also supports Haftar and in the past the General National Congress has received support from Turkey.

Qatar has long been involved in Libyan politics and had ties to the Islamist opposition since the Gaddafi era. When the Arab Spring uprisings of 2011 began, it supported the Muslim Brotherhood, which was the best organised political force in several Arab states.

Qatar was the first country to recognise the Libyan rebels and had begun sending them arms early in 2011 as they fought to topple Gaddafi. Media reports also suggest that Qatari special forces were deployed to Libya and at least some Libyan rebels received military training in Qatar.

The Emirates also sent weapons to rebel groups early in the conflict but, failed to build lasting ties. Instead the Emirates turned to General Haftar, a supposed former CIA asset who as recently as 2011 was living in exile in Northern Virginia.

Alaa Abd el-Fattah, arguably Egypt’s most prominent democracy activist, has just been handed another lengthy prison sentence. Despite this, a book of his writing has recently been ... END_OF_DOCUMENT_TOKEN_TO_BE_REPLACED

People in Arab countries have been talking more openly about sex and sexuality for some time now, especially on social media. And for the first time ever, they have the vocabulary ... END_OF_DOCUMENT_TOKEN_TO_BE_REPLACED

A prominent rights group in Egypt, the Arabic Network for Human Rights, is ending operations just as the country braces for a controversial NGO law. Is this the beginning of the ... END_OF_DOCUMENT_TOKEN_TO_BE_REPLACED

Moncef Marzouki was Tunisia's first democratically elected president after the fall of dictator Ben Ali. Today he is the most prominent critic of increasingly counter- ... END_OF_DOCUMENT_TOKEN_TO_BE_REPLACED

Asef Bayat, professor of Sociology at the University of Illinois, Urbana-Champaign, has been studying revolutions and how they affect people since 1979. In his recent book, " ... END_OF_DOCUMENT_TOKEN_TO_BE_REPLACED

Every year in December, the team at Qantara.de takes a look back at the articles that proved most popular with our readers. This year is no different. Here is a run-down of the ... END_OF_DOCUMENT_TOKEN_TO_BE_REPLACED
Author:
Joseph Hammond & Suhaib Kebhaj
Date:
Mail:
Send via mail

END_OF_DOCUMENT_TOKEN_TO_BE_REPLACED
Social media
and networks
Subscribe to our
newsletter