Muammar al-Gaddafi believed that he had set an intellectual milestone with the political and social theories he developed in his "Green Book." Education, culture, and, intellectual life in Libya has since had to limit itself to a dance around this Golden Calf. By Fakhri Saleh 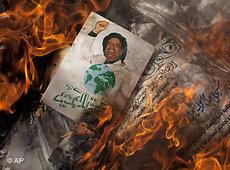 "Gaddafi declared war on everyone and everything that didn't agree with the ideas propounded in his Green Book," writes Fakhri Saleh

​​A dictator does not only seize all political power; he also claims complete sovereignty over thought. He doesn't only throw the body in prison, but attempts to control and condition the mind as well. This is what Muammar al-Gaddafi has done for 42 long years.

In the process, he has destroyed all of the intellectual and cultural achievements that Libya had built up in the 1950s and 1960s. This was an era in which the country was looking to develop a modern civil society, a vision that had also attracted Libya's immediate neighbours.

Yet, while Egypt, Tunisia, Morocco, and Algeria established the foundation for a secondary and university educational system, resulting in a flourish of intellectual and cultural life, Libya's educational system came apart at the seams and there was a withering of culture. The reason was that Gaddafi, obsessed with his theories of revolution through which he planned to radically transform thought, politics, and society in Libya, declared war on everyone and everything that didn't agree with the ideas propounded in his Green Book.

Thus began the exodus in the 1970s of the country's best minds, while Gaddafi drew the more pliant souls among the cultural elite and academics into his fold and let them celebrate the great thoughts and ingenious insights laid down in his peculiar concoction of a book. The Green Book was to serve as the ideological bible of Libya, form the world view of its citizens, and provide the basis for all knowledge and scientific endeavours.

Gaddafi not only blocked the development of civil society in Libya, but also drove away the country's leading intellectuals, artists, scientists, and politicians. Those who remained became court jesters in the service of the sovereign. In order to further praise the "Brother Leader", already raised to the pantheon of the gods, roundtable and panel discussions were held to analyse his philosophy, the intellectual achievements of his Green Book, as well as Gaddafi's numerous and seemingly endless speeches, which the people somehow tolerated with remarkable patience.

​​And to make the farce perfect, the revolutionary leader also felt called upon to take on the mantle of author with his 1993 work "Escape to Hell and Other Stories". Although he managed to find critics willing to pay homage to this collection of essays, it would be vastly unjust to apply the term literature to this banal assembly of texts.

Artists and thinkers unwilling to submit to the prevailing forces also fell victim to this climate of intellectual decline. Some resigned themselves to silence in internal exile, while others left the country. One could say that the crime committed by the revolutionary leader upon his country's cultural life is no less heavy than his offences against society or his political and economic sins.

If we cast a glance back in history, then one is doubly struck by the silencing of all serious voices in Libya. For example, back in 1957, the thinker Khalifa Muhammad at-Tallisi, who died only last year, published his groundbreaking studies on Khalil Gibran and the poet Abu al-Qasim ash-Shabbi. In 1966, the philosopher and translator Ali Fahmi Khashim published a fundamental work on Mu'tazila's rationalist school of Islamic thought, followed by translations of Apuleius' "The Golden Ass" and G. W. Southern's "Western Views of Islam in the Middle Ages", as well as completing a whole range of other works and translations.

Yet, the so-called intellectual life fostered by the sovereign and his mediocre and talentless adherents forced such significant authors into isolation or silence. Whoever has visited the country within the past two decades is left with the question as to where the representatives of the Libyan intelligentsia have disappeared. It is certainly impossible to hear their voices in the noisy and hollow chatter of panel discussions, where the thoughts of the revolutionary leader are acclaimed. Despite the fact that intellectual life and politics are completely without substance, one is left even more aghast at the incomprehensibly wretched state of education and culture.

In the numerous countries where Libya's creative elite have found refuge for both life and dignity, their literary talents have left a mark not only on Arab cultural life, but they have also shone in other languages, particularly in works published in English.

Here, one could point to the novelist Hisham Matar and the excellent poet and translator Khaled Mattawa, who has done an immeasurable service in rendering numerous literary works and poems from Arabic into English. 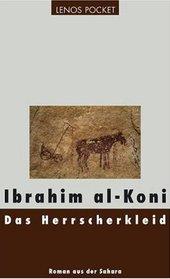 Inspired by Gaddafi's personality: Cover of the German edition of "The Tumour", Ibrahim Al-Koni's bleak analysis of power

​​In addition, the writer Ibrahim al-Koni conceived his most important works while in exile in Switzerland, where he has lived since 1993. These are novels that focus on the austere life in the desert and the existential bonds between man, beast, and nature. He writes of the inner hardships of life in a material world, which burden the delicate soul that only longs for liberation from this earthly prison.

It is remarkable that al-Koni, an admirer of Dostoevsky and explorer of existential issues of being and non-being, published "The P" a few years ago, a completely different sort of work in which he offers a bleak analysis of power. It almost seems as if al-Koni was inspired by Gaddafi's personality in this novel, first published in Arabic under the title "Al-Waram", in which he examines the nature of power and its submerged dimensions and structures.

In the novel, the ruler's robe grows into his very skin and the attempt to take it off threatens to tear off his flesh. Here, al-Koni finds a fitting symbol for the fateful fusion of man and power. The denial of power means a slow and painful death, shattering both mind and soul in the process. This almost seems prophetic in light of Gaddafi's determined attempt to hold on to his crumbling power. It is as if al-Koni could see this moment coming and transformed it into a metaphor that could apply to the misuse of power and tyranny throughout the whole of Arab history.

In the prisons of the Libyan secret police

Hisham Matar, born in 1970 and now living in exile in Britain, provides a moving account of Gaddafi's regime of terror, in which those suspected of treason or undesired political activity simply vanish without a trace. 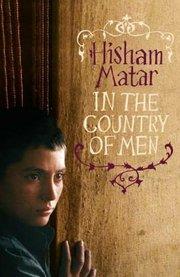 ​​His novel "In the Country of Men", published in 2006, is written from the viewpoint of a child and deals the anxieties of a family expecting the father will be arrested any day by Gaddafi's blood-hounds on suspicion of counterrevolutionary activities.

Matar, whose own father was arrested in Cairo in 1990 by Mubarak's security forces and handed over to Libya, where he disappeared in the prisons of the secret police, attempts to shatter the borders of the autobiographical account. With stories of a childhood in the shadow of a murderous dictatorship, he has constructed a similarly valid depiction of power to that of al-Koni.

The glory and grandeur of the ruler is thereby presented from the viewpoint of the "rats, cockroaches, and bacteria" – names that Gaddafi has used to refer to his own people in recent days.

Matar's recently published second novel in English, "Anatomy of a Disappearance", also revolves around the trauma of growing up with the knowledge that one's father was kidnapped and disappeared. Although the author has attempted to alter the autobiographical events by transposing the narrative to Egypt, the deeply-felt pain that has burdened Matar for years remains evident in the novel. Even now, he has been following recent events day and night with the last glimmer of hope in an attempt to discover if his father is still alive.

In 1996, a letter reached his family in the recognized, precise handwriting of his father, Matar told the Guardian newspaper. In 2002, as well, they received information that led them to hope he was not among the victims of a massacre in the feared Abu Salim high security prison in Tripoli, where, according to human rights organizations, more than 1200 prisoners were killed.

Can there be anything more horrible than these stories from the realm of the "revolutionary leader", who does not even recoil from inflicting yet another bloody slaughter against his own people right now?

Fakhri Saleh is a literary scholar and cultural editor for the Jordanian newspaper "Al-Dustour". He also writes for other major Arab newspapers.

The Libyan Writer Ibrahim Al-Koni
"The True Trade Is Life"
Ibrahim Al-Koni, scion of a Libyan Tuareg family, is regarded as the great writer of the Sahara. In his new novel "The Puppet" Al-Koni perceptively depicts the way in which the modern world intrudes into the Tuaregs' traditional society. Kersten Knipp presents the novel

END_OF_DOCUMENT_TOKEN_TO_BE_REPLACED
Social media
and networks
Subscribe to our
newsletter