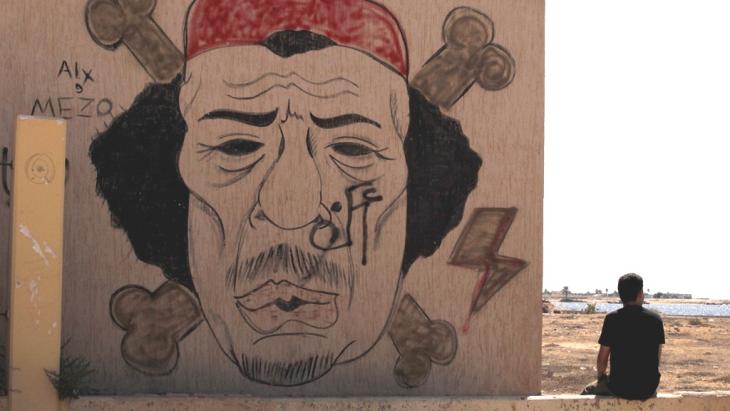 As senior officials of the former regime face war crimes charges in a trial, Libyans are struggling to come to terms with their past. Unhealed wounds and renewed social strife is endangering the country's fragile democratic transition. Valerie Stocker reports from Tripoli

Once overlooking the city from almost every billboard in the capital Tripoli, Muammar Gaddafi still inhabits the cityscape, through fading revolutionary graffiti and old banknotes still in circulation. And he's still rather very present in peoples' minds. Held responsible for all of Libya's ills by some, and posthumously hailed as guardian of stability by others, the fallen leader has become a frame of reference for a nation in search of identity.

"Most importantly, the tyrant died", Libyans comment to cut short laments about the problems of the transitional phase. But many cannot yet turn the page. "We got rid of one Gaddafi, now we have six million – one in every Libyan's head" is a widely heard metaphor that expresses people's frustrations as they realise that getting rid of its leadership does not automatically change a system. Both heroes of the revolution and victims of past crimes feel betrayed by Libya's democratically elected parliament and its government.

On August 16 the country observed Martyrs' Day, which commemorates the hanging of freedom fighter Omar Mukhtar by the Italian occupants in 1931 but nowadays also serves as reminder of students hanged in the two decades following the 1969 coup, as well as 1,200 inmates of Gaddafi's infamous Abu Slim Prison killed in 1996. 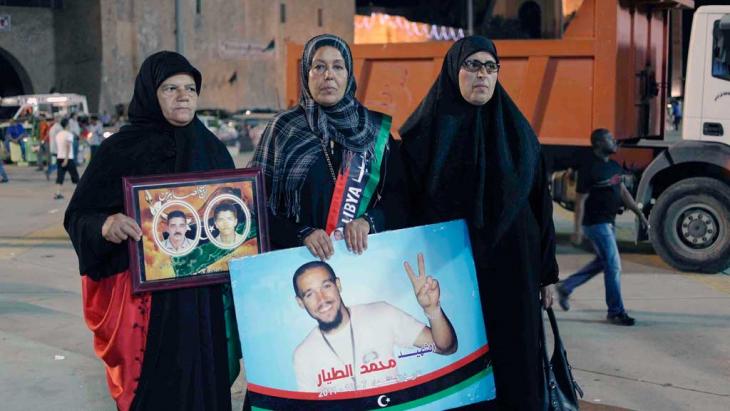 Like many Libyan mothers, Fatima Tayar (center) mourns the death of her sons: Her first son died in the prison massacre and the second two years ago, when rebels stormed the regime's last stronghold in Tripoli

Last but not least homage is paid to the many rebels who died fighting the regime in 2011. Amina Mezdawi's family was struck not just once: Her first son died in the prison massacre and the second two years ago, when rebels stormed the regime's last stronghold in Tripoli. After years of fear and shame, the "Women of Abu Slim" can now express their sorrow openly, but they are still waiting for in-depth investigations. "The government pretends it cares for us but in fact we are no less marginalized than before", says Amina.


Fatima Tayar, whose son died in the revolution, joins in: "Their blood was spilled and nothing has changed, except for the flag and the anthem!"

Refusing to give up hope

Wafia Qantri brought her 10-year-old son to the event. He is all she has now, as five others were taken away when regime forces broke into her home during the revolution, vanishing without trace. But in all her distress, Wafia refuses to give up hope: "They might be held in secret detention centres in neighbouring countries. Only international organizations can help me now!"

Meanwhile, Prime Minister Ali Zeidan's commemoration speech at Congress is interrupted by angry relatives of those who died and disappeared. "We set up a Ministry for Martyrs' Affairs…", he sets out several times but his voice is swallowed by the clamour. As Martyrs' Day comes to an end and Tripoli's central square is cleaned up, the mothers are the last ones to leave, disillusionment written on their faces.

In the adjacent public gardens, children jump about on trampolines to the tune of a famous revolution song. "The blood of our martyrs will not be forgotten" is one of its lines. For the young generation life goes on, but even they carry their share of the burden. 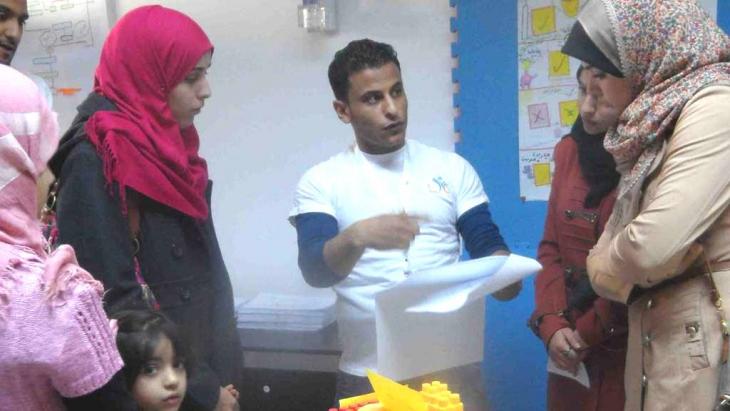 "I wish we could achieve national reconciliation": social worker Mahmoud at the Libya Youth Center

27-year old Mahmud, social worker at the Libya Youth Center, which offers counselling and group activities to children and teenagers affected by past and current violence, considers the weak educational system a main reason for the youngsters' inability to project themselves into the future and find a meaningful purpose in life. "Out-dated pedagogy and indoctrination of schoolchildren have led to a rise of ignorance." The effects of it will be felt for many years to come, he says.


"We'd really have to start from scratch, because although history and social studies curricula have changed, the black-and-white thinking hasn't." Children are still too often drawn into political debates, forced to take sides in debates they are too young to understand. "Some say that teachers focus on slandering supporters of the former regime rather than putting forward national unity."

Recently the headmaster of a girls' school raised controversy by making pupils demonstrate against the government. "I wish we could achieve national reconciliation, but moreover security problems are such that no one can guarantee agreements will be respected", Mahmud believes.

In a divided society in which warfare has resulted in traumatisms and excessive violence, arguments are more often carried out with guns rather than discussion. Young men remain enrolled in revolutionary brigades, which give them a sense of belonging. Their return to civilian life is hindered by the lack of job opportunities and persisting local conflicts.

Clashes break out frequently between tribes and towns in the western Nafusa Mountains and in southern Sebha, where Arab residents and Tebus, an ethnic minority, rival for influence. International and local NGOs are promoting dialogue, building on traditional modes of consensus seeking. But civil society actors are frustrated at the slow pace of the reconciliation talks, as community leaders agree on the principle, but not on the details. 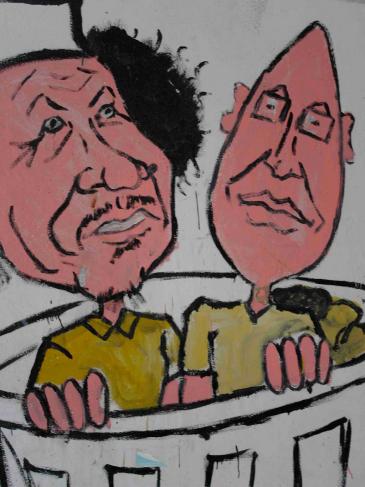 "We got rid of one Gaddafi, now we have six million." Pictured: A graffito depicting Muammar Gaddafi and his son Saif al-Islam, who is currently on trial

"The same arguments are brought forward again and again but neither side admits it is blocking the process," sighs Mossadeq, who is involved in facilitating peace talks. There have been some local agreements, but they often fall short as tribal leaders fail to keep the young fighters under control. The police are virtually powerless as brigades continue to rule much of the country.

The war crimes trial against Gaddafi son Saif Al-Islam, ex-intelligence chief Abdallah Senussi and dozens of other former regime members, which began on 19 September with a first general hearing in Tripoli, is seen as a landmark step by victims or families of the dead.

Most in Libya agree there cannot be peace without justice. But the latter case highlights persistent divisions in a country where local communities and armed groups act according to their own rules and interests.

Zintan, whose fighters captured Saif Al-Islam, refuses to hand him over to authorities in Tripoli or to transfer his case to the International Criminal Court. "We keep him in an undisclosed location to protect him from a revenge killing", says Ajmi Al-Ateri, the brigade leader in charge of the detention facility.

The man once considered Gaddafi's heir did not appear at the Tripoli hearing will first be tried in Zintan on minor charges involving an alleged escape plan. "There is not yet sufficient evidence for us to bring up the war crimes case," Al-Ateri commented on this matter.

Meanwhile, more urgent tasks lie ahead. "How can we focus on transitional justice when people continue to get killed and abducted every day?" asks Hamed, a security staff member in Tripoli. Security and reconciliation go hand in hand. Struggling to impose the rule of law, the government recently announced a comprehensive national dialogue initiative. Many are sceptical but concede that no option should be left unexplored.

The southern shores of the Mediterranean Sea are losing sand faster than almost anywhere else. The ecological and economic damage is immense. The good news is, there are ways to ... END_OF_DOCUMENT_TOKEN_TO_BE_REPLACED

A ceasefire has been in effect in Libya for the past year and a half. Yet after Russia's attack on Ukraine, another proxy war looms in Africa's most oil-rich country. Mirco ... END_OF_DOCUMENT_TOKEN_TO_BE_REPLACED

Libya's first-ever skate park opened at the end of May in downtown Tripoli to the delight of local youngsters. Built on a site once used by former dictator Muammar Gaddafi's ... END_OF_DOCUMENT_TOKEN_TO_BE_REPLACED

United Arab Emirates strongman Sheikh Mohammed bin Zayed al-Nahyan, who was formally elected president on 14 May, has led a realignment of the Middle East, creating a new anti- ... END_OF_DOCUMENT_TOKEN_TO_BE_REPLACED

Russia's ranking on the World Press Freedom Index has fallen again over the Kremlin's wartime censorship of the Ukraine conflict. From Myanmar to Mexico, journalists continue to ... END_OF_DOCUMENT_TOKEN_TO_BE_REPLACED
Author:
Valerie Stocker
Date:
Mail:
Send via mail

END_OF_DOCUMENT_TOKEN_TO_BE_REPLACED
Social media
and networks
Subscribe to our
newsletter