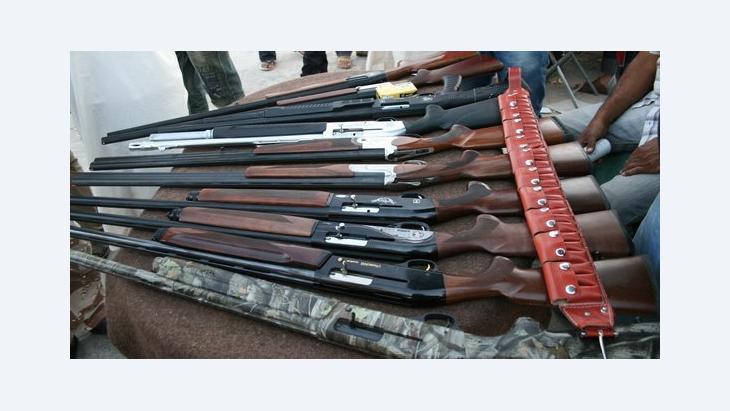 ﻿They smuggle weapons, drugs and refugees: Criminal networks are controlling eastern Libya. The government has pledged to offer the impoverished region economic alternatives. By Markus Symank in Benghazi

"Can I try it out?" asks a customer holding the hand of a small child, grabbing hold of an AK-47 and firing it into the air. The child doesn't flinch: in Benghazi, the sound of firearms is as commonplace as the hooting of a car horn or the ringing of a mobile phone.

Since the civil war last year, it's estimated that 200.000 weapons are now in Libyan hands. That's more than three per capita. Most of them originate from the arsenals of the dictator Muammar Gaddafi, who was killed in the uprising. 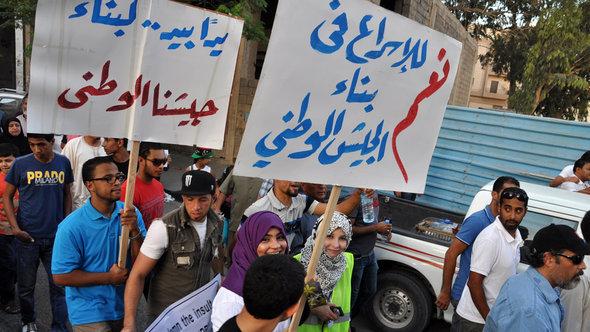 "Any attempt to disarm the militia by violent means cannot be successful as long as smuggling remains the only appreciable source of income": Demonstration against armed militia in Benghazi

​​Others bear the emblem of the Emirate of Qatar, a nation that armed the rebels during the civil war.

Whereas in the capital Tripoli most people have stowed their Kalashnikovs in the cellar or handed them over to the authorities, many people in Benghazi won't leave their houses unarmed. The crime rate has soared since the revolution; the few police officers on duty are overstretched and frightened. "Rulers shape their people. Gaddafi was a gangster. He turned us into a nation of gangsters," says Tarek Ahmed, a security adviser for foreign oil companies.

For 42 years, no one in Libya was allowed to carry a weapon, Ahmed explains. Since the civil war, weapons are now perceived as a symbol of freedom – the freedom to take whatever you please: money, cars, political influence.

As the people continue to arm themselves, the new transitional government does not have the means to stem the process. State security forces have tried twice in recent months to clear the weapons market in Benghazi, says Ahmed. On both occasions, they were violently repelled by the traders. 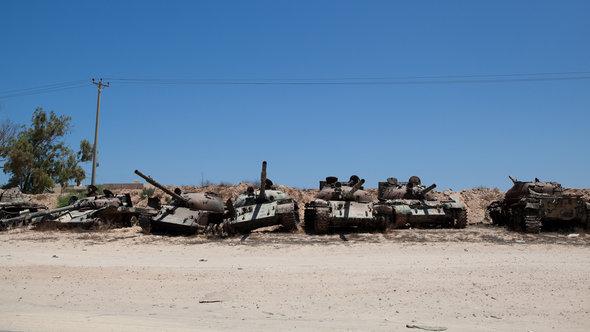 Relics from the era of armed resistance against the Gaddafi dictatorship: according to international estimates, there are still far more than 200,000 weapons in circulation throughout Libya

​​When a group of armed men laid waste to the offices of the television broadcaster Al-Hurra TV in the city centre a week ago, the authorities were powerless to do anything. The attackers had taken issue with the channel's reporting of the latest fighting in the desert town of Bani Walid.

The Libyan security forces also cut a poor figure during the storming of the US consulate in Benghazi on 11 September this year. According to eyewitness statements, guards took to their heels when Islamists fired rockets and grenades at the building. The US ambassador Christopher Stevens and three other US citizens were killed in the attack. The White House believes the terrorist attack was carried out by Al Qaeda sympathizers.

From a Libyan perspective, the threat posed by radical Islamist groups is of secondary concern. "Unlike in Algeria or Egypt, violent Islam is not rooted in Libyan culture," says Abdu, a political scientist from Benghazi who does not want to give his full name.

Since the revolution, dozens of exiled Libyans have returned to their homeland from Afghanistan and Pakistan and now pose a threat to foreign installations. But, says Abdu, they cannot count on society's backing. Even in what is presumed to be the Islamist stronghold of Derna, almost 300 kilometres to the east of Benghazi, residents recently hounded the self-appointed holy warriors out of the city, he adds.

Most of the Libyan militia and cartels are not pursuing a religious Utopia, but rather quite profane business interests. Several of the continent's most lucrative smuggling routes lead through Libya, a nation with 4,300 kilometres of desert border that is almost impossible to police.

There is no shortage of takers for weapons from Libya in the volatile states of the southern Sahel zone: In Darfur for example, rebels have suddenly received a boost in their battle against the genocidal regime of Omar al-Bashir – thanks to new military equipment from their neighbour. 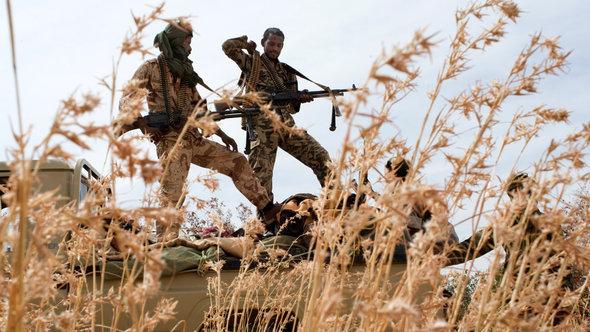 Sahel states in the undertow of Islamic fundamentalism: In Mali, the flood of weapons from Libya has led to a secession of the North under the banner of radical Islamists and Tuareg fighters

​​In Mali, the flood of weapons from Libya has led to a secession of the North under the banner of radical Islamists.

The most lucrative activity for the Libyan smugglers is however the trade in drugs, weapons and refugees with Egyptian Bedouins. Since the fall of Gaddafi, it's thought that thousands of weapons have found their way into the hands of fanatical Islamists in the Sinai and Upper Egypt, including surface to air missiles capable of shooting planes out of the sky. Many see a direct connection between the most recent spate of attacks on Egyptian security forces and unchecked weapons imports from Libya.

In August alone, 16 Egyptian soldiers were killed in an attack close to the Israeli border. "Illegal goods traffic with Egypt is the most important source of revenue for militia in the east of Libya," says political expert Abdu.

At the only official border crossing between the two nations close to the Mediterranean coast it is easy to see just how valuable the contraband trade is for the region: travellers here have to pass through no less than four customs posts – each of them controlled by a different militia.

In the underdeveloped east of the country, organized criminal activity is often the only way out of long-term unemployment for many young Libyans. Although the region is rich in natural resources, most oil revenues are finding their way into the pockets of an increasingly small number of people.

Tarek Ahmed points out that the economic situation is closely bound up with the security situation. Any attempt to disarm the militia by violent means cannot be successful as long as smuggling remains the only appreciable source of income. "The government must offer people economic alternatives. Otherwise, Benghazi will remain a tinderbox," he warns.

To illustrate his point, Ahmed points to the capital Tripoli, where the economic climate has seen a considerable improvement in recent months. Many businesspeople are already attaining a higher turnover than before the revolution. An open weapons market such as the one in Benghazi would be inconceivable in Tripoli; the last armed brigades left the metropolis months ago.

The end of July saw the launch of the African Union’s "Sauti" digital publication, the first young feminist platform in Africa, which this year showcases stories by female youth ... END_OF_DOCUMENT_TOKEN_TO_BE_REPLACED

Timbuktu, the ancient desert city in Mali, has always been shrouded in myths. Charlie English’s "The book smugglers of Timbuktu" proves that the city has not lost its magic. By ... END_OF_DOCUMENT_TOKEN_TO_BE_REPLACED

With "Amankor/The Exile", the Kel Tamashek band Tartit have produced another cultural treasure for the rest of the world to appreciate. Their original intent may have been to keep ... END_OF_DOCUMENT_TOKEN_TO_BE_REPLACED

Cultural arrogance has long been a feature of Western journalism and it continues to flourish. But can journalists really describe the world from the perspective of a Yemeni ... END_OF_DOCUMENT_TOKEN_TO_BE_REPLACED

Diali Cissokho left his native Senegal for North Carolina years ago. Raised as a griot, one of the traditional musical story tellers and historians of West Africa, he wanted to ... END_OF_DOCUMENT_TOKEN_TO_BE_REPLACED
Author:
Markus Symank
Date:
Mail:
Send via mail

END_OF_DOCUMENT_TOKEN_TO_BE_REPLACED
Social media
and networks
Subscribe to our
newsletter