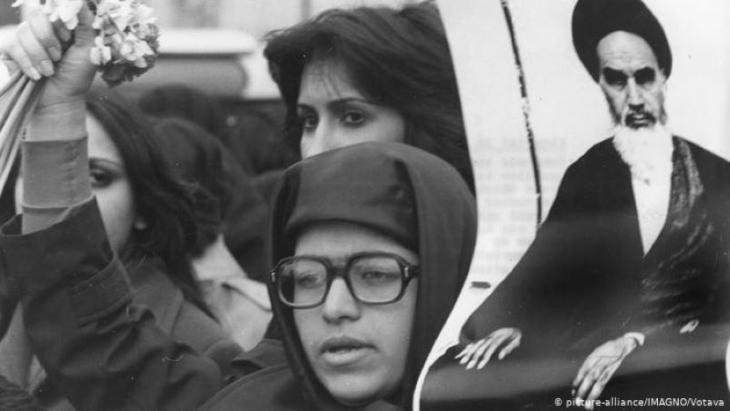 Life in the Islamic Republic, then and now
The softening of Sharia in Iran – four harams turn halal

On the face of it, the Iran of 2021 still bears considerable resemblance to the Islamic theocracy that was established following the overthrow of the Shah in 1979. Yet, although the enforcement of Sharia law continues to this day, the definition of what is permitted and what is forbidden has shifted over the years. By Mehdi Abadi

As the new regime cemented its grip on power in 1980, Iran's rulers introduced Sharia law across the country, leading to dramatic changes that affected every aspect of Iranian life. From now on, Islamic law would dictate the food Iranians were permitted to eat, the clothes they could wear, the music they could listen to, and the sports they were allowed to engage in or watch.

Much has, however, changed over the last four decades, and certain things once considered haram (forbidden by Islamic law) have become halal (permissible). Here are four examples of the way Iranian Sharia has been modified over the past 42 years.

From 1979 onwards, these salt-cured fish eggs – a delicacy in Iran, as elsewhere – were banned, because the ayatollahs considered caviar to be haram. This was good news for the sturgeon fish, which was in danger of being overfished, but it did nothing for Iran's troubled economy.

The Islamic Revolution was not directly responsible for caviar's haram status. Sturgeon roe had long been on the ayatollahs' blacklist. Indeed, Ruhollah Khomeini, Iran's first supreme leader, had already issued a fatwa on the matter prior to 1979. Yet this had neither received much attention, nor carried much weight during the final years of the Shah's reign. 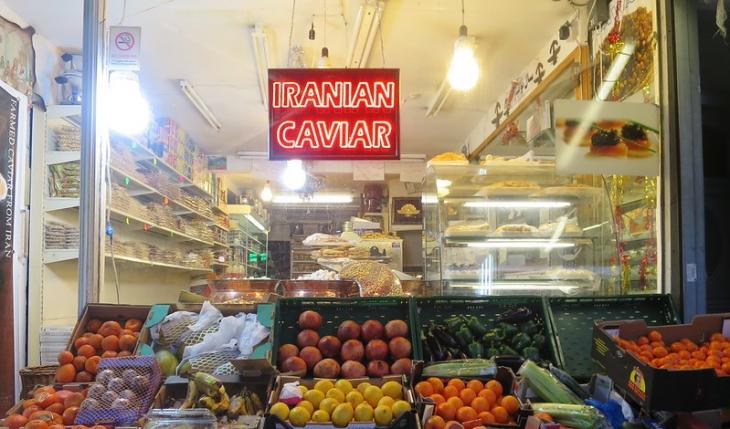 Once banned, now an export market worth millions: according to Shia Islam, eating any part of a fish considered to have no scales – in this case sturgeon – is haram. Four years after the revolution, however, science was able to provide the Iranian regime with a handy get-out clause. Scientists informed the Supreme Leader that certain types of sturgeon do indeed have scales, while most others have lost their scales through evolution. Today Iran's highly lucrative caviar industry is tightly controlled by the state, which hopes to see production top 10 tonnes this year

These days, however, caviar is no longer haram in Iran. Why? Because the fatwa changed as Iran's economic hardships increased, and what was haram became halal. So why was caviar forbidden in the first place? The answer: fish scales. According to Shia Islam, eating any part of a fish considered to have no scales, in this case sturgeon, is haram.

Four years after the revolution, science was able to provide the Iranian regime with a handy get-out clause. Scientists informed the Supreme Leader that certain types of sturgeon do indeed have scales, while most others have lost their scales through evolution.

Today the Iranian caviar industry, which is tightly controlled by the state, is a multi-million dollar sector. Iran's deputy agriculture minister, Hossein Salehi, is hopeful that the country's annual caviar production will reach 10 tonnes this year.

Yet, despite all this to-ing and fro-ing about caviar, it remains a luxury well beyond the reach of your average Iranian. One hundred grams of beluga caviar costs over 11,000,000 Iranian rials (about $260).

The ancient game of chess was also banned in revolutionary Iran. Why? Because gambling is haram in Islam, and since chess could provide a vehicle for gambling, it followed that chess would be outlawed in Iran.

So how – and when – did it become halal again? In 1988, the Grand Ayatollah Khomeini was asked about Islamic laws on "playing chess without any aim of gambling and just as a sport", to which Khomeini responded: "if the game is played with no aim of winning or losing, there is no problem [with playing chess]". 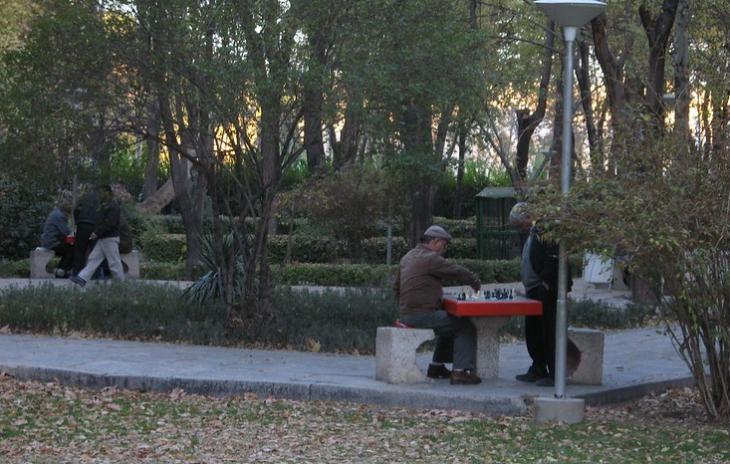 A game to be played with no thought of winning or losing? Sixteen year-old chess Grandmaster Alireza Firouzja, who beat World Champion Magnus Carlsen in the final of the Banter Blitz Cup in 2020 plays under the flag of FIDE, the global chess organisation, after leaving his native Iran to avoid government restrictions. Iran strongly discourages its citizens from competing against Israelis, as a sign of protest against the country and a show of solidarity with the Palestinian people

And what did Khomeini mean by playing a game without any thought of winning or losing? The general consensus appears to have been not to push the point. Since then, Iranians have played chess avidly in clubs and parks, and even participated in international championships.

However, Iran's clerics are not the only religious leaders who are anti-chess. In 2016, a video of the grand mufti of Saudi Arabia went viral, declaring chess haram.

It is no secret that conservative Islam regards music as haram. This precept was applied strictly in post-revolution Iran, with Khomeini determined to ban music of all kinds across the country. But then, what about the national anthem, or TV and radio broadcasting?

If it had been left to Khomeini to decide on the country's national anthem, he would probably have concluded that Iran did not need one. With reference to music in TV and radio, in a 1980 letter to Iran's national broadcasting company, Khomeini clearly ordered: "Eliminate music. Don't be afraid of being called old guard just for eliminating music." The letter continued: "I have already told Mr. Ghotbzadeh  [then head of Iran's national broadcasting company] to remove this [music] from the programme. He says it's not possible. I don't understand what he means by 'it's not possible'. Why is it not possible?"

A few years later, Khomeini would learn why it was not possible – deciding to ease his fatwa first for 'revolutionary music' and then for Iranian folk music. In 1988, he finally published a fatwa, easing music prohibition in Iran.

During the first years of revolution, it was forbidden even to buy and sell traditional Iranian instruments. These days, by contrast, it is common to see street musicians playing electric guitar in metro stations or on the crowded streets of Tehran and other large Iranian cities.

This does not mean the ban on music has entirely lapsed in Iran. It is still rare to hear live music in religious cities such as Qom and Mashhad, due to a tacit ban on live music in these cities. Moreover, female singers may still only give concerts to audiences made up solely of women.

"What kind of sport is this?" Ayatollah Hussein-Ali Montazeri asked angrily when he first saw boxing. "This is savagery. Shut it down," continued Khomeini's designated successor.

Although what Montazeri said was not an official fatwa, his comment resulted in a ten-year ban on boxing. The ban did not only apply to boxing; specific martial arts such as kickboxing and Muay Thai were also banned in revolutionary Iran.

It took ten years for Iranian boxers to convince the authorities that they were not acting against Islamic law. Ahmad Nategh-e Noori, the brother of an influential cleric, was the one who managed to convince the ayatollahs.

Prior to 1979, Noori had been a freestyle wrestler and boxer, and after the revolution, he was elected as a member of parliament. In a 2016 interview, Noori recalled taking a pair of boxing glove to the office of the ultra-conservative Ayatollah Ahmad Jannati and persuading him that boxing gloves are designed to protect boxers from physical harm.

Apart from combat sports, other sports like bodybuilding were also banned during the first decade of Islamisation of Iran. Moreover, broadcasting men's wrestling, swimming, weightlifting and even football matches on Iranian TV was fraught with difficulty owing to the skimpy nature of athletes' sportswear.

Four decades after the 1979 revolution, certain sports remain banned in Iran. Professional wrestling is still prohibited in Iran because of its ties to American culture, while Krav Maga is banned because of its Israeli roots. Women's sports are still subject to extremely heavy restrictions, aimed at discouraging women from engaging in what the mullahs consider immodest and un-Islamic behaviour.

Despite all the changes, Sharia law still has the final say in Iran, ordaining what is prohibited and what is permissible. Forty-two years after the revolution, there may be no ban on playing chess, eating caviar or singing in the street. Yet the country's Islamic regime will still silence any voice of opposition in the name of Sharia.

Short movies nominated for an Oscar often don't get wide public attention. But when one is about an Iranian girl seeking freedom from male domination by taking off her veil, ... END_OF_DOCUMENT_TOKEN_TO_BE_REPLACED

World-famous Iranian film director Jafar Panahi has been incarcerated for several months, even though Iran's Supreme Court overturned the verdict against him. Now, he has gone on ... END_OF_DOCUMENT_TOKEN_TO_BE_REPLACED

Young women are driving forward the protests against the Iranian regime, which have been going on for months. Literature provides clues as to why that should be, and why the ... END_OF_DOCUMENT_TOKEN_TO_BE_REPLACED

Visiting the country of her parents, murdered by the Iranian regime in 1998, German-Iranian artist Parastou Forouhar finds a changed society: hopeful, strong and courageous, ... END_OF_DOCUMENT_TOKEN_TO_BE_REPLACED

Ballet performances are prohibited in Iran. In her film "1001 Nights Apart", director Sarvnaz Alambeigi documents the history of dance in the Islamic Republic. By Fahimeh Farsaie END_OF_DOCUMENT_TOKEN_TO_BE_REPLACED

END_OF_DOCUMENT_TOKEN_TO_BE_REPLACED
Social media
and networks
Subscribe to our
newsletter