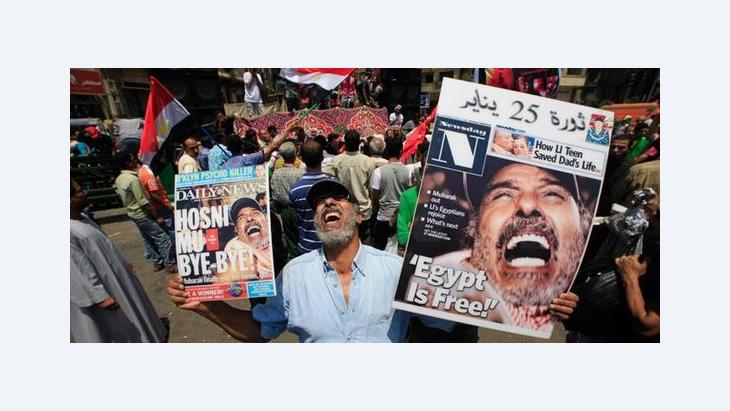 Literature and the Arab Spring
An Uprising of Words

﻿What subversive role did literature play in the run-up to the uprisings in the Arab world? And should prose, poetry and other literary genres devote themselves entirely to the "revolution" or maintain a critical distance? Answers from Stephan Milich

This was the vicious cycle, described so aptly by the Syrian poet, dramatist and radio journalist Muhammed al-Maghut (1934–2006) in 1984, in which countless Arab writers and artists were trapped over the past five decades. Creative individuals were subject to intimidation, arrest and other methods of political repression, placing them under pressure and effectively gagging them if they expressed opinions critical of official policy.

Alternatively, they were co-opted by the state in cases where their material situation as intellectuals appeared to leave them no other option. That made it simple enough for dictators such as Saddam Hussein, Muammar al-Gaddafi and Hosni Mubarak to find poets to sing their traditional praises (madih).

Following the end of European colonial rule, which left the region's countries with conflict-loaded borders and the after-effects of fatal identity politics, the new start into independence in the mid-twentieth century had led merely to a new form of political bondage under dictatorships. A growing number of intellectuals and the general public recently came to regard these local despotic regimes as "self-colonisation" – similar to the situation in some African states. 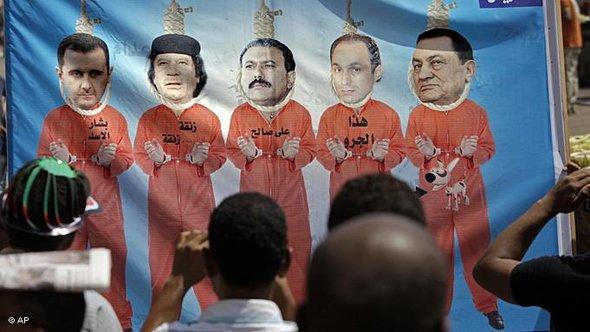 "Self-colonisation": After Western powers left their spheres of influence in the Middle East, native autocrat rulers took over the business of oppression - a key aspect of the frustration, anger and lack of perspectives that built up over many years, writes Stephan Milich

​​The feeling of being oppressed once again, or still not being free – not due to Western intervention this time, but by rulers from one's own country – was a key aspect of the frustration, anger and lack of perspectives that built up over many years. The presidents and their cronies had made the homeland, Arabic al-watan, their property. As a result, the Arab uprisings of 2011 were essentially concerned with people being able to identify with their homelands again and demanding the right to shape their own societies.

Over several decades, the pervasive disillusionment that was a prerequisite for the revolutions was clothed in powerful words and stories of differing shades by the numerous Arabic prose writers and poets, many of whom went into exile. These words and stories in turn affected the self-image of Arab societies.

Perhaps the most influential writer in this respect is the Iraqi Muzaffar al-Nawab (born 1934), who left no Arab government unscathed by his bitter sarcasm, written in both Iraqi vernacular and standard Arabic. He returned to his country in 2011 after forty years in exile.

Between pessimism and protest 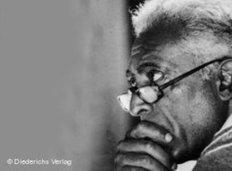 ​​In actual fact, people had begun to take their leave from the idea of change ever happening. The image of "dead hope" made the rounds of literary and literary critical discourse. A number of writers were unable to shake off the repeated disappointment at the apparent stagnation in their countries, descending into permanent pessimism.

That did not prevent them from continuing to decry the dictatorial conditions, however. As such, writers may not necessarily have initiated the revolutions, but they did pre-empt them and lay a literary foundation for them.

An author like Abdul-Rahman Mounif (1933–2004), who not only criticised the devastating effects of Saudi oil wealth and Wahhabi "cultural policy" on the region's development in his novels and essays, but also untiringly denounced the dictatorial structures of socialist and nationalist governments, had a lasting influence on public consciousness.

And when the prose writer Sonallah Ibrahim (born 1937) turned down the Egyptian state prize in 2003, he set an impressive example of how to resist state attempts to co-opt literature, putting the reasons for the coming revolution into clear words:

"I have no doubt that every Egyptian is absolutely aware of the extent of the catastrophe our country is heading for. It is not only the real threat from Israel on our border in the East, American paternalism or our government's foreign policy weakness: it is every aspect of our lives. We have no theatres, no cinemas and no academic research any more; all we have is festivals, conferences and dubious foundations. We have no industry, no agriculture, health or justice. Instead, corruption and theft flourish. And anyone who raises an objection runs the risk of being beaten or tortured. An exploitative minority has robbed us of our soul." 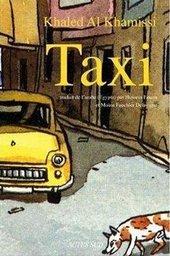 ​​The Egyptian Khalid al-Khamissi's widely translated 2006/2007 book Taxi is a collection of conversations in the censorship-free space of taxi cabs, each one expressing the anger and desperation of the entire population, which was eventually paired with the creativity of young Egyptians on the streets and squares of liberation.

The wealth of subversive Arabic literature means there are many more examples, alongside which a number of Arab women writers – particularly from Lebanon, Egypt, Syria, Algeria, Morocco and Saudi-Arabia – have been radically questioning male dominance and patriarchal structures in society since the early 1990s, sounding out new, more egalitarian forms of living as individuals.

Perhaps the greatest achievement of this new women's literature, aside from its ideological critique and scepticism towards the great nationalist narratives, is its exposure of a culture of violence in public and private life and the accompanying inability to put intimate feelings and thoughts into words or even to allow them, as in Alawiya Sobh's novels, for example. This includes an unsparing literary approach to sexuality from a decidedly female perspective, which has broken a wide range of stubborn taboos.

The case of Iraq also played a key role in the creation of a revolutionary consciousness. Nobody had taken dictatorship and the cult of personality as far as Saddam Hussein. As a result, nobody criticised and exposed the misanthropic effects of dictatorship as clearly as Iraqi authors. One outstanding example of a poem subversively anticipating Saddam's fall comes from the pen of the Iraqi Adnan al-Sayegh. 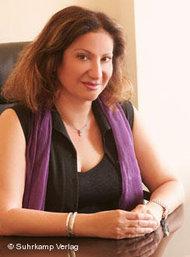 ​​Written in Malmö in 1999, it is entitled "An Episode from the Homeland":

The statue of the president was really rather bored
and so it climbed down from its golden pedestal.

It turned its back on the delegations,
the flowers and the choirs of children
and began to mingle with the people,
who instantly called to it,
"With our souls, with our blood
we sacrifice ourselves to you, oh …"

That made the statue feel slightly better
but when the other statues found out
they too climbed down to the ground
and began to charge at one another.

And the people watched
and did not know
who was the true president among them.

The people as extras against a dictatorial backdrop

Yet the poem not only imagines a possible end to the dictatorship – the death of the president out of boredom, narcissism and too many doppelgangers. It also reveals the deep-seated fears that held people in check for decades, rendering them passive observers, extras against a dictatorial backdrop as they still are in some countries.

Songs, children in flowers were only there to decorate the ugly face of the state. Yet at least these fears could no longer keep the people in the Arab countries from taking to the streets and calling for an end to the system. 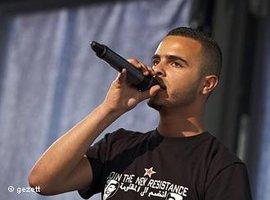 "Arab poetry has rediscovered its fighting spirit since the beginning of the uprising": the Tunisian El Général, one of the most popular singers of the Arab revolution

​​Young poets and rappers have found more direct words and an increasingly open ear among the younger generation in recent years. One example is the Tunisian El Général (born 1989), who uploaded his song "Rais Lebled" to the internet in 2010 and became one of the most popular singers of the Arab revolution:

Mister President!
I'm talking to you today
In my name and in the name of the entire enslaved nation!
In 2011 there are still people dying of starvation,
People who want to work for a living
But their demands still go unheard.

The best-known Syrian singer from the ranks of the opposition, Ibrahim Qashoush from Hama, died for his revolutionary songs in July 2011. His body was found with his vocal chords cut out in the Orontes River, as the magazine Inamo reported in its last edition. The demonstrators still sing his song:

The sound of revolution from Tahrir Square

Not only Arabic hip-hop or more traditional musical genres, but also poetry has rediscovered its fighting spirit since the beginning of 2011. The Iraqi master of Arabic poetry, Saadi Yousef, born near Basra in 1934 and living in London, wrote a short revolution poem on 13 March 2011 entitled "Song from Tahrir Square", summing up the demonstrators' demands in simple words:

Many more texts are sure to join these spontaneous word creations, which have become a key aspect of the revolutionary culture and a contemporary form of agitprop, particularly in Egypt, Tunisia and Syria. Let us hope that Arabic literature will continue to play a critical role towards developing peace and democracy, by reflecting on what the words democratic, free and just can mean in this world – and thus providing impetus for other regions. For the change has only just begun.

The author has a PhD in Arabic literature; he's a lecturer at the university of Göttingen.

Recent efforts to rehabilitate Assad are setting a damaging precedent for accountability, just as the international community is expressing the need to hold Russia to account for ... END_OF_DOCUMENT_TOKEN_TO_BE_REPLACED

The Kurds are under attack from two sides: from Turkey, and from Iran. The situation in their territories in northern Iraq is becoming increasingly desperate. Birgit Svensson ... END_OF_DOCUMENT_TOKEN_TO_BE_REPLACED

More than 300 children in rebel-held northwest Syria kicked off their own football World Cup on Saturday, with organisers hoping to shine a light on communities battered by 11 ... END_OF_DOCUMENT_TOKEN_TO_BE_REPLACED

Lamya Kaddor, MP for Germany’s Green Party, visited Qatar with a group of parliamentarians. In interview with Claudia Mende, she advocates a differentiated picture and urges that ... END_OF_DOCUMENT_TOKEN_TO_BE_REPLACED

Arabs in the German capital? For many, this means criminal clans. Yet the city is home to a vibrant intellectual scene. Exiles from Syria, Palestine and Egypt are gathering to ... END_OF_DOCUMENT_TOKEN_TO_BE_REPLACED

After a two-year hiatus, the Arab League re-convened at the beginning of November in Algiers against a backdrop of uncertainty and discord. By Pierre Boussel END_OF_DOCUMENT_TOKEN_TO_BE_REPLACED
Author:
Stephan Milich
Date:
Mail:
Send via mail

END_OF_DOCUMENT_TOKEN_TO_BE_REPLACED
Social media
and networks
Subscribe to our
newsletter