For a long time, literature from the United Arab Emirates led a shadowy existence. But the country's modernization has effected fundamental change in the sector. Susanne Schanda met up with the young female writer Mariam al-Saadi 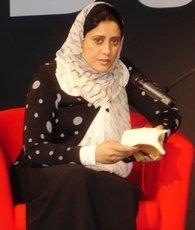 "I don't believe one can change anything by provocation": Mariam al-Saadi

​​Mariam al-Saadi hesitates in front of the stage at the Basel Exhibition Center, where she is about to introduce her first book in German translation. She allows the Syrian-German translator and publicist Suleiman Tawfik to go first, then sits down next to him the red armchair.

While Tawfik introduces the literature of the Arab Emirates, Mariam al-Saadi readjusts her headscarf and looks surreptitiously into the audience. It's her first reading. Readings – and indeed any kind of literary event – are not common in the Emirates. Mariam al-Saadi belongs to a generation of writers who primarily publish their work on the Internet.

Literature from the Gulf region is still in its youth. International recognition has only come on the heels of the oil boom. The country's rapid technological development clearly contradicts the traditions of this tribal society, and is the cause of friction.

Friction between the generations

The sense of alienation from one's own traditions is mirrored in the literature of this region, as in the work of Mariam al-Saadi. In her story "The Old Woman", which she reads out at the International Book and Literature Festival in Basel, the tensions between the generations of one family become clear to the point of speechlessness.

The grandmother is taken care of in the appropriate manner, but everything that means something to her is taken away. When she dies, she is buried in the "standardized" way, and even the son who has emigrated comes to the funeral: "Otherwise people would gossip about it and wonder why he hasn't come to his mother's memorial ceremony." 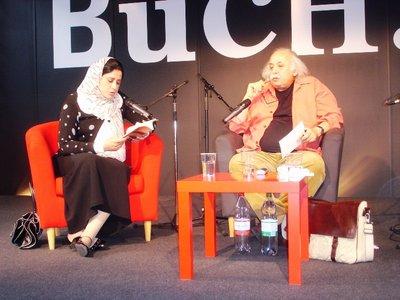 The first international reading is also the first ever reading: Mariam al-Saadi and Suleiman Tawfik at the Basel Book Fare

​​Mariam al-Saadi is true to her traditions. She has worn the Islamic headscarf since she was 14, and has no problem with that. Despite her professional activities, and although she is 35 years old, she lives with her parents because she is unmarried.

"The extended family is the basis of our society. It's even difficult for a man to live independently outside of the family, and even more so for a woman," says the writer, who earns a living as a copywriter for the Abu Dhabi public transport authorities.

"My generation lives a very modern life at work. But at the same time, we have to be subordinate to tradition within the family context. The rapid modernization of our country and the fact that 80 percent of the population are now foreigners has meant an even more pronounced return to tradition, out of fear of losing one's own identity," explains the writer.

Al-Saadi goes on to say that it is not easy to maintain a balance between one's own identity and that of alien influences, and that the tensions and contradictions in daily life are ever-present.

Between tradition and progress

Mariam al-Saadi claims not to engage with major social issues, but her stories about interpersonal relationships and subjective sensitivities reveal a great deal about the tensions of a society that is still trying to find its way between tradition and progress.

Mariam al-Saadi discovered the western world as a child, through books and films. She studied English literature and urban planning, before going to the University of Aberdeen in Scotland to follow a course in Islamic Jerusalem Studies.

As she explains after the reading, she felt as though she was a writer long before she even began to write: "I wanted to put off the writing until I'd sorted out my life, with an education and a profession," she says. "And suddenly I noticed that time was just passing by, nothing was being resolved, and I was still not writing."

That was 2005. "I sat down and began to produce these short stories, whenever they presented themselves. I was never short of ideas." Mariam al-Saadi published her work in magazines and on the Internet, eventually coming to the attention of a publisher.

Her first collection of stories was published in 2009 in Arabic in the Emirates. It has now been published in German under the title "Mariam und das Glück" (Mariam and Happiness) by the small Swiss publishing house Lisan Verlag, subsidized by the state cultural foundation Abu Dhabi Authority for Culture & Heritage.

"We are a fortunate generation of writers, which receives generous support in the publication and the translation of our work," says Mariam al-Saadi, nevertheless conceding that very little literature is read in the Emirates, just as in the rest of the Arab world in general. The government, which also promotes the education of girls in targeted programs, is more progressive than the majority of the population, she says.

A glimpse at daily social routines

Although the country likes to portray itself as worldly to the outside, traditional structures of the tribal society still exert an influence over public life today, and bring with them numerous taboos. Just as in other Arab countries, writers here also have to be aware of sensitive issues that can easily fall victim to censorship.

"Religion and faith, sexuality and the most sensitive, politics," says Mariam al-Saadi. She avoids these subjects herself, but stresses that this is not because she is afraid of the censor: "I don't believe one can change anything by provocation," she says. "My interest is in ordinary human stories, the relationship between people from different social classes and cultures."

The writer, who has won many accolades, has produced numerous short stories but as yet no novel. "I write short stories because I am short of breath," she says. "I've tried to write a novel several times, but each time the start of the novel became a completed short story."

Mariam al-Saadi currently has a new novel project on the go. "I hope it doesn't end up as a short story again," she says, laughing.

The Rise of Dubai
A Laboratory City in the Desert
Is Dubai's groundbreaking urban construction project the way of the future - or will it stumble over its own contradictions? Rüdiger Heimlich travelled through the emirate, gathering voices from Western and Arab intellectuals

END_OF_DOCUMENT_TOKEN_TO_BE_REPLACED
Social media
and networks
Subscribe to our
newsletter