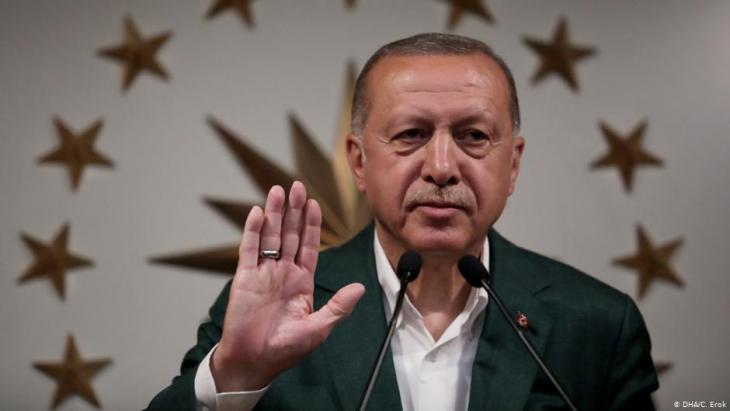 Because he completely dominated the poll, the Turkish President will be finding it even harder to swallow his party's defeats in Ankara und Istanbul. The loss of Turkey's two biggest cities shows that in the midst of an economic crisis, more Turks want solid solutions instead of bluster and grandstanding aimed at polarising the electorate. By Ulrich von Schwerin

Politics was always theatre for Recep Tayyip Erdogan. The president took his first steps in politics as an actor and to this day, he is only wholly in his element on the campaign stage. In today's Turkey, Erdogan's role in the play "Maskomya" (short for Freemason, Communist, Jew) has been largely forgotten. But when 22-year-old Erdogan and his fellow students performed the play in 1976 in Istanbul, it was watched by more than 2,000 spectators.

In the play, young Islamists warn of the threat of a conspiracy by Jewish capitalists, Communist agitators and freemasons. After more than 20 performances on the Bosporus, the young Erdogan and his friends took the play on tour for several weeks, travelling through Turkey by bus. One of the highlights was a performance in the presence of Milli Gorus leader Necmettin Erbakan, a man who had a profound influence on the young Erdogan before their political paths eventually diverged.

To this day, Erdogan has retained his love for a big show as well as for the idea that in the wings of the global stage, a clandestine puppeteer is pulling the strings. It was evident in the run-up to the local elections just how much energy he still brings to the stage. Although not standing for election himself, he held more than a hundred rallies at which he prowled, yelled and sang across the stage, microphone in hand, muttering about unspecified enemies.

During his precisely choreographed appearances, a screen intermittently showed commercials featuring the roads, clinics and universities built by his party since 2002. In addition, he also showed excerpts from speeches by his rivals, before insulting them as enemies of the nation and traitors of Islam. His campaign show even used footage of the Christchurch mosque attack as a way of stoking the sense of threat.

Just as in the play of 1976, his campaign was suffused with the suggestion that Turkey faces a threat from enemies both within and without. Erdogan repeatedly invoked a danger posed by secret powers pulling the strings in politics and the economy and seeking to divide the nation. Whether he was referring to the rising cost of food, the currency decline, or the Gezi Park protests of 2013 – Erdogan blamed it all on a conspiracy against Turkey. 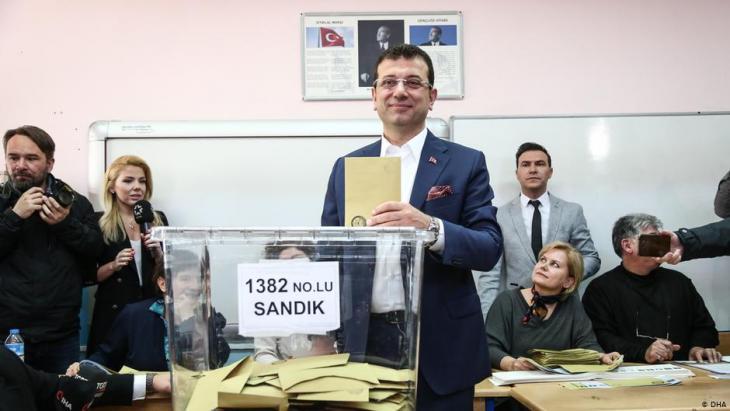 Surprise success of CHP opposition candidate Ekrem Imamoglu: the victory of the unassuming local politician over Binali Yildirim, the old henchman of President Recep Tayyip Erdogan, is painful for the AKP not only because of Istanbul's economic importance. In the metropolis of millions, Erdogan himself began his rise to the top of the state in 1994 as head of the city government. The party set the tone here for a long time. Whoever controls Istanbul controls Turkey, had Erdogan announced during the election campaign

Many observers agreed that Turkey has never experienced such a hard-fought, polarising election campaign. That Erdogan and his party had to accept several significant losses on election night offers a glimmer of hope. The AKP – in its alliance with the right wing extremist MHP – may have once more secured a slim majority nationwide. But the two largest cities Istanbul and Ankara fell to the opposition, made up of the Kemalist CHP and the right wing IYI party.

Electoral debacle in Ankara and Istanbul

While CHP candidate Mansur Yavas looked set to clinch the capital, in Istanbul the vote count was as tense as a crime thriller. Just a few thousand votes separated the two candidates and around midnight, the AKP candidate Binali Yildirim claimed victory. But on the following morning, the electoral commission announced that the CHP politician Ekrem Imamoglu had a lead of 28,000 votes.

Home
Print
Newsletter
More on this topic
Turkey's local polls: is it a win or a loss for Erdogan? Countdown to Turkeyʹs local elections: Thank God for tomatoes!After the elections in Turkey: There may be trouble ahead
Related Topics
Economy, Justice and Development party (Turkey), Recep Tayyip Erdogan, Turkish opposition
All Topics

Istanbulites take pride in being the world’s melting pot and its natural outcome: having a bustling abundance of international cuisine. Visiting restaurants opened by recent ... END_OF_DOCUMENT_TOKEN_TO_BE_REPLACED

The Kurds are under attack from two sides: from Turkey, and from Iran. The situation in their territories in northern Iraq is becoming increasingly desperate. Birgit Svensson ... END_OF_DOCUMENT_TOKEN_TO_BE_REPLACED

Canan Topcu came from Turkey to Germany as a child. In her essay, she describes how bothered she was by the racism she encountered in her country of origin when she travelled ... END_OF_DOCUMENT_TOKEN_TO_BE_REPLACED

According to Turkey’s revised media legislation, spreading "fake news" now carries a prison sentence. The definition of what this entails has been kept intentionally vague. ... END_OF_DOCUMENT_TOKEN_TO_BE_REPLACED

On 3 November 2002, Erdogan's newly founded AKP, Justice and Development Party, came to power in Turkey. It has ruled the country ever since, becoming more authoritarian with each ... END_OF_DOCUMENT_TOKEN_TO_BE_REPLACED

Kurdish journalist Nedim Turfent has been in prison in Turkey since 2016 – because he reported on police violence. A collection of his writings penned while behind bars is now ... END_OF_DOCUMENT_TOKEN_TO_BE_REPLACED
Author:
Ulrich von Schwerin
Date:
Mail:
Send via mail

END_OF_DOCUMENT_TOKEN_TO_BE_REPLACED
Social media
and networks
Subscribe to our
newsletter