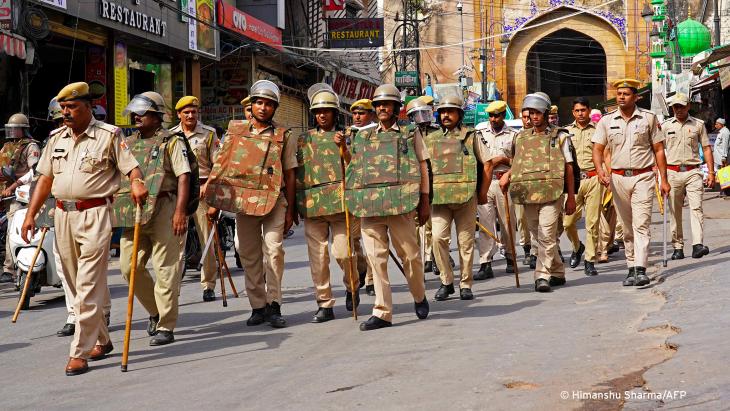 Hundreds of police were deployed in an Indian city on Wednesday following the murder of a Hindu tailor allegedly by two Muslim men after comments by a ruling party official about the Prophet Muhammad that have inflamed sectarian tensions.

The cold-blooded attack in the western city of Udaipur was captured on video, quickly going viral online and gripping a country with a long and explosive history of deadly communal violence. The video showed the tailor Kanhaiya Lal being attacked in his shop. Further footage showed the two accused purportedly brandishing large knives and threatening to kill Prime Minister Narendra Modi.

They then justified their murder for Lal's alleged support of comments about the Prophet Mohammed by a spokeswoman for Modi's Hindu nationalist ruling BJP party, remarks that have triggered protests across parts of the Muslim world in recent weeks.

Hundreds had gathered outside Lal's house ahead of his funeral on Wednesday, a day after several hundred gathered to protest and chant Hindu slogans in response to the killing. People on motorcycles and cars waved saffron flags – the colour of the Hindu faith – and shouted slogans demanding the death penalty for the accused.

The two young men were arrested on Tuesday as they attempted to flee Udaipur by motorbike, news reports said.

To prevent potential sectarian violence, authorities deployed 600 extra police and put the city of around 450,000 people under curfew, snapping mobile internet access there and in other parts of Rajasthan state. Local authorities issued a month-long order banning four or more people from gathering anywhere in the state.

"Both the accused in the killing have been arrested and we will ensure strict punishment and speedy justice," said Rajasthan chief minister Ashok Gehlot. Gehlot appealed to people to not share the video as it would "serve the attackers' motive of creating discord in society".

On social media members of the ruling BJP party and supporters depicted the killing as an attack on all Hindus, with thousands of tweets carrying hashtags like #IslamicTerrorismInIndia.

The remarks about Mohammed by Bharatiya Janata Party (BJP) spokesman Nupur Sharma at a TV debate in late May sparked protests that turned violent in some parts of India and demonstrations across the Islamic world. She was sacked by the party after her comments, which saw the governments of nearly 20 countries summoning their Indian envoys to express their displeasure.

Lal's wife told broadcaster NDTV that on 10 June her husband was arrested over a social media post supporting Sharma and released on bail a day later. Five days later the father of two said he had received death threats but on Tuesday returned to work in his shop, she said.

The purported video of the killing – which police have not yet confirmed is genuine – showed Lal measuring one of the men for new clothes before he and his accomplice attack him.

Indian Home Minister Amit Shah said the National Investigation Agency (NIA) would take over the investigation of the "brutal murder". "The involvement of any organisation and international links will be thoroughly investigated," Shah tweeted.

India has a seen sporadic sectarian violence between majority Hindus and Muslims, who make up around 14 percent of the 1.4-billion-strong population. Inter-religious riots in the capital New Delhi left 53 people dead in 2020, while in 2013 62 people were killed in the nearby city of Muzaffarnagar.

In 2002 at least 1,000 perished in Gujarat when Modi was state premier. Most of the victims were Muslims. Rajasthan also saw riots earlier this year, when almost 100 people were arrested after police fired tear gas to stop fighting and stone-pelting.

Modi's party has been accused of marginalising the Muslim community and sewing divisions with Hindus since coming to power in 2014.

The row over Sharma's comments followed anger across the Muslim world in 2020 after French President Emmanuel Macron defended the right of a satirical magazine to publish caricatures of the prophet.

Images of the prophet are strictly forbidden in Sunni Islam. French teacher Samuel Paty was beheaded in October 2020 by a Chechen refugee after showing the cartoons to his class in a lesson on free speech.    (AFP)

END_OF_DOCUMENT_TOKEN_TO_BE_REPLACED
Social media
and networks
Subscribe to our
newsletter