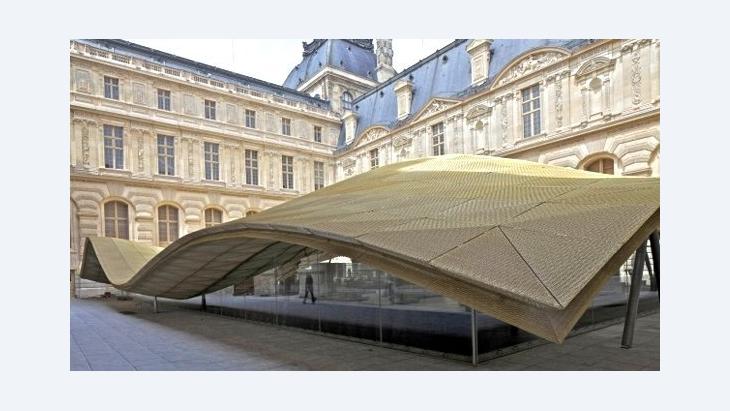 ﻿The Louvre has just opened a new wing devoted to Islamic art and thereby once again highlighted its status as a museum of world art. The successful project has gone ahead under the auspices of three French presidents and rises above fanaticism. By Joseph Hanimann

More than twenty years ago, the Louvre opened its central entrance via a glass pyramid in the Napoleon court – and yet it still remained the unimaginably vast megapolis of masterpieces, complete with tourist boulevards and secret pathways.

Now, with its newly opened Department of Islamic Art, housed in a courtyard in the Louvre's southern wing, the museum is even closer to embodying the claim it has fostered for over two hundred years – that of being a museum of world art. Adhering to its 18th century conception, there is no division of works into special museums corresponding to cultural-geographic factors, but instead the museum aims to emphasize the cross-pollination and mirroring of ideas that reflect the universality of artistic creation. Correspondingly, the Louvre unveils its new Islamic wing as a marvel in contemporary museum expansion.

Since the late 19th century, the Louvre has had a collection of objects from the Arab-Islamic world and has continued to purchase such artworks. Yet, only a small portion of the collection has ever been on display and most items have been in storage. One of the main concerns of Henri Loyrette, the current Louvre director, since assuming his position in 2001 was to create a new department to exhibit the museum's five thousand ceramic vessels, architectural ornaments, carpets, and books in addition to some three thousand objects from later centuries found in the collection of the Musée des Arts Décoratifs in Paris.

The religious dimension of Islamic art

The option of distributing these works within the existing rooms of the museum was immediately rejected. 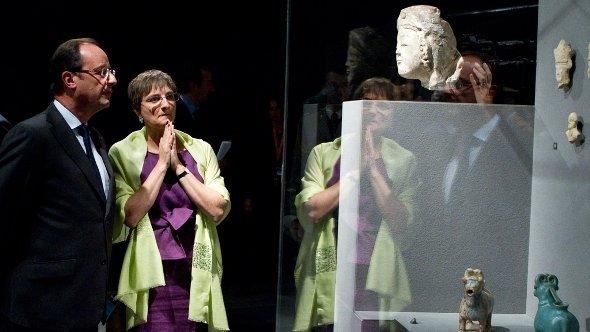 "Islamic civilizations are older, more vital, and more tolerant than those who today speak in their names," exclaimed French President François Hollande at the opening ceremony of the new Islamic art wing in the Louvre, indirectly referring to the violence in the wake of the Mohammed video and the desecration of mausoleums in Timbuktu

​​The decision to cover the Visconti Courtyard with a roof was one that spanned three French presidents. Chirac approved the project, Sarkozy supported it, and, last week, Hollande opened the new Département des Arts de l'Islam with an oblique reference to the renewed uproar concerning Islam.

The choice of name for the new wing reflects its programme. The religious dimension in the sphere of Islamic art is much more difficult to efface than it is for Christian art. Yet, the Louvre is not interested in Muslim art objects, per se. In fact, the vast majority of the three thousand exponents are everyday objects.

The new department's two stories highlight the development of art influenced by Islam between the 7th and 19th centuries spanning from Andalusia to India. The exponents speak for themselves in terms of their individual artistic value, yet, through their – at times massive – conglomeration, they also relate a cultural-historic subtext.

The catchword here is intermixing and mutual influence – the exact opposite of an obsessive purity of style.

The display cases offer a tremendous number of details to gallery visitors. Late Roman decorative friezes fragment into arabesque panelling, oil lamps are inscribed with Arabic lettering, the motifs on ceramic bowls tend toward geometric abstraction in 9th century Egypt. At the same time, depictions of humans and animals lasted a long time.

Well-known examples of this are the plant and palace mosaics of the Grand Mosque in Damascus, of which the Louvre possesses two fragment copies. Even into the 13th century, dragons adorned dishes in the former Buddhist artistic city of Bamiyan in present-day Afghanistan, where the monumental Buddha statues were blown up.

The Chinese influence on ceramic glazing remained identifiable in Central Asia for centuries. In Egypt, by contrast, snake motifs gradually transformed into geometric designs. What remains characteristic for a vast part of the Islamic world is the omnipresent use of figurative script on vases, tiles, friezes, gravestones, and combat helmets, long serving in purely decorative, religious, and often even magical functions. 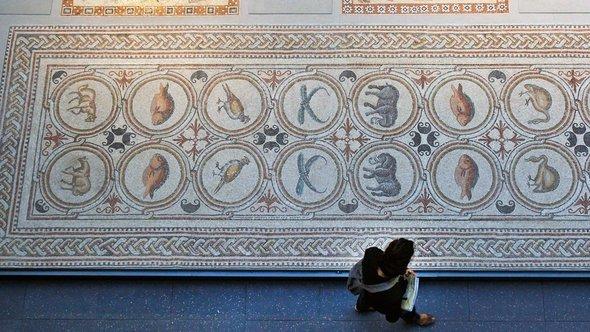 Art gallery geared towards the superlative: With an exhibition space of 3,000 square metres, the Louvre's new Department of Islamic Art has close to 3,000 artworks on display, reflecting the diversity of art from Spain to India from the year 622 to the 19th century

​​The lower level of the new wing is primarily devoted to the period after the 16th century and features works of art produced in the three great modern Islamic empires – the Ottoman Empire in the West, the Mogul Dynasty in India, and the Shiite Safavid dynasty in Persia.

Mario Bellini and Rudy Ricciotti, the project's two architects, understood from the start that a large-scale courtyard roofing, as has been the case for monumental sculptures in other wings of the Louvre, was inappropriate for the small and detailed exponents of the new section. They therefore chose to construct a wave formed lattice roof made of glass and metal, positioning the new construction at a distance from the existing courtyard facades to create an attractive vis-à-vis with the opulent façade ornamentation.

The ground floor is illuminated by a yellowish-gold filtered daylight, while twilight reigns in the lower floor, which features enormous carpets, tiled walls, and house gateways. The blackened cement of gallery's side-walls and the metal inserts in the floors bestows the space with a certain discreet majesty, despite the steady stream of visitors.

Above all, the new section is clearly integrated into the existing topography of the Louvre. Two connecting pathways lead north directly to the Greek exhibition halls, and another pathway goes east to the Coptic art of Egypt. To the south side of the new construction is the completely reorganized collection of Roman antiquities from the eastern Mediterranean region. 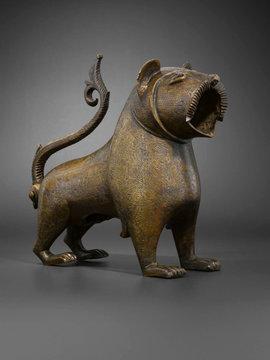 Masterworks of Islamic art: Among the showpieces of the new Department of Islamic Art in the Louvre is the bronze lion from Monzon in Spain (12th to 13th century), which functions as a water vessel

​​The mosaic segments from Antioch, which lies in present-day Turkey, or those from the early Christian church of Qabr Hiram, formerly Tyra, from Lebanon can be seen here for the first time in all their magnificence. The spaces featuring works from the middle and late Roman empire are a celebration in cultural synthesis. An Egyptian bronze Horus is set beside a clay Eros figure and a marble Dionysus.

Under Henri Loyrett, the Louvre has become a world museum employing state of the art management techniques. An Egyptian Mameluke archway from the 15th century and a Mashrabiya latticework from the 18th century were restored with half the cost – 600,000 Euros – covered by the museum's patron programme. The Louvre not only knows how to export its name to Abu Dhabi for enormous sums, but also how to get other states to help finance projects within its own walls.

The French state provided only about a third of the hundred million Euros necessary for the building project. The rest came from the Louvre's own resources, private donors, and more than a quarter of the costs from the King of Morocco, the Emir of Kuwait, the Sultan of Oman, and the Republic of Azerbaijan.

What might at first glance appear to be the entanglement of a cultural institution with global image strategies can be seen, in this case, as a justifiable move, since the Louvre has insisted upon its independence. For now, museum policy remains aloof from everyday politics. In any case, the results are convincing and demonstrate a fascinating interconnection between the West and the Islamic world, and which is far-removed from any kind of fanaticism.

Home
Print
Newsletter
More on this topic
''Shah 'Abbas: The Remaking of Iran'': History in the Maelstrom of World PoliticsContemporary Art from Saudi Arabia: The Kaaba as a Security ZoneInterview with Rose Issa: "Culture Should Not Be Restricted to the West"
Related Topics
Dialogue of Cultures | Intercultural Dialogue, Islamic art, Islamic philosophy, Places of Dialogue
All Topics

No other Western poet was arguably so well-versed in the Koran or so fascinated by Islam as Germany's national hero, Goethe. In a new publication that examines all Goethe's ... END_OF_DOCUMENT_TOKEN_TO_BE_REPLACED

The disappearance of Razan Zeitouneh and her colleagues has been one of the greatest mysteries of the Syrian war – until today. DW's investigative unit hunted clues across six ... END_OF_DOCUMENT_TOKEN_TO_BE_REPLACED

Who’s financing, planning and commissioning terror attacks in Europe? This investigative documentary follows a trail that leads to Pakistan’s intelligence service, the ISI, which ... END_OF_DOCUMENT_TOKEN_TO_BE_REPLACED

The Libya Conference will be held in Berlin on 23 June. Much has been achieved since the last Libya Conference in Berlin in January 2020. The ceasefire is holding, there is a ... END_OF_DOCUMENT_TOKEN_TO_BE_REPLACED
Author:
Joseph Hanimann
Date:
Mail:
Send via mail

END_OF_DOCUMENT_TOKEN_TO_BE_REPLACED
Social media
and networks
Subscribe to our
newsletter