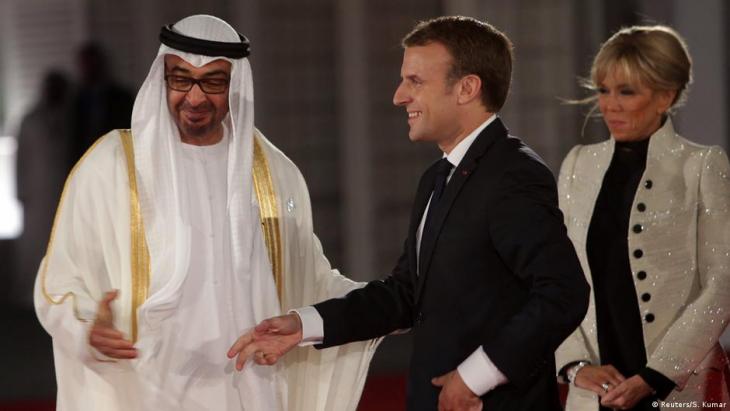 France will sign several major deals with the United Arab Emirates on Friday, with two sources saying Paris could finally seal a multi-billion dollar Rafale warplane sale, as it looks to deepen economic and political ties with Abu Dhabi.

French President Emmanuel Macron begins a two-day trip to the Gulf on Friday, and will also visit Qatar and Saudi Arabia. His visit comes at a time when Gulf Arab states have voiced uncertainty about the United States’ focus on the region even as they seek more weapons from their key security ally.

The French leader has forged a good relationship with Abu Dhabi Crown Prince Sheikh Mohammed bin Zayed al-Nahyan (MBZ) with investments flowing between both countries. Paris has a permanent military base in the Emirati capital.

The sources said Abu Dhabi could buy about 60 fighter jets, although they cautioned the deal was not finalised. This would be the biggest bulk purchase of the Dassault-made Rafale, other than by the French army, and comes after deals in Greece, Egypt and Croatia this year.

“I don’t want to spoil the Christmas present with the president,” Anwar Gargash, diplomatic adviser to the UAE president, told reporters ahead of the visit when asked whether Abu Dhabi would purchase the fighter jets.

The French presidency declined to confirm or deny the sale and Dassault could not immediately be reached for comment.

Macron will attend a signing ceremony with MBZ on the sidelines of the Dubai Expo 2020 later on Friday, the presidency said on Thursday in a handout of the French leader’s schedule.

The on-off negotiations for the Rafale fighter jets have been going on for more than a decade with Abu Dhabi publicly rebuffing France’s offer to supply 60 Rafale jets in 2011 as “uncompetitive and unworkable.” Abu Dhabi already has Mirage warplanes.

French weekly business magazine Challenges reported on Nov. 19 that talks were at an advanced stage for between 30-60 planes and could be sealed during Macron’s visit. Neighbouring Qatar has already ordered Rafales.

Defence sources say the Rafale would replace the Mirage 2000 fleet and is unlikely to displace the American F-35 as the UAE continues to hedge its security with two major suppliers, France and the United States.

The deal would nonetheless be seen as a signal of impatience as the U.S. Congress hesitates on approving an F-35 deal amid concerns about the UAE’s relationship with China, including the prevalence of Huawei 5G technology in the country.

“This is an excellent relationship and various agreements will be signed. After the president’s visit the relationship will be broader in different areas,” Gargash said.    (Reuters)

END_OF_DOCUMENT_TOKEN_TO_BE_REPLACED
Social media
and networks
Subscribe to our
newsletter